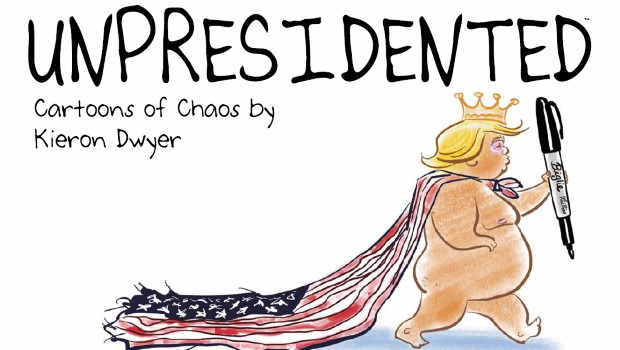 Summary: When reality is so absurd sometimes the only coping mechanism is humour, Kieron Dwyer tries to find what laughs can be had in an otherwise dark situation.

Unpresidented lampoons American political culture since the last election. It shines a light on the greed, the bigotry, hypocrisy, stupidity and general cultural chaos that shrouds America in the time of Trump.

The writing here is minimal (perhaps obviously given it’s political satire in comic form we are working with here), but what is there is to the sharp and too the point. It’s the sort of material you might find in a newspaper or similar publication… if they were daring enough to publish them. There’s often no mincing of words here, Kieron doesn’t beat around the bush he calls a spade a spade and a racist a racist. There is no hesitation in calling out the jarring lack of intelligence in the decisions that have been made, the claims that have been thrown about and the overall absurd situation America (and to a large extent the world) finds itself in.

As much as the writing underlines the horror that is the current political landscape, it’s the artwork that really has the impact here. Images of Trump as a version of the “great Pumpkin” from Charlie Brown, Steve Bannon having a “unique” marshmallow roast. The art is what really puts the finishing touch on the humour of each piece… whether it’s Kellyanne Conway’s unique cooking or Trumps “Trump Stamp”… it gives us a chance to laugh at things that when presented in their natural state are far more terrifying.

There is a notion that if you feel powerless to stop atrocities, sometimes all you can do is laugh at the absurdity of it all. The idea that you laugh sometimes out of shock more than anything. I think there are many reasons why we laugh at Trump and his cabal, shock is certainly one of them, nervous laughter that perhaps trickles out as we hope this is all just a horrible dream and we will wake up any moment to a world that isn’t so fractured and growing in hatred. Perhaps we laugh simply because it is a more useful response than simply dropping into the foetal position and rocking back and forth.

For those of us who need humour to deal with this bizarre situation we all find ourselves in, Unpresidented is a good option to add to your collection of coping mechanisms.