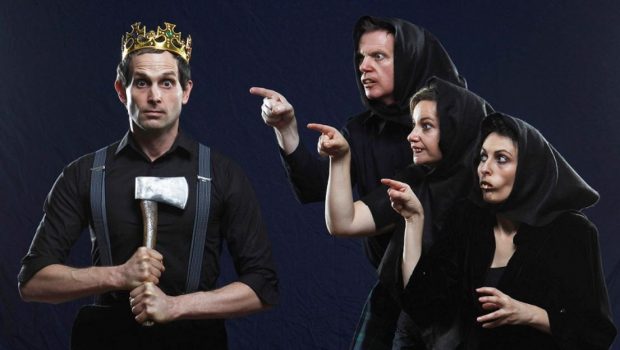 Company 13’s Macdeth, a Shakespearian treat performed in an immediate, filmic style will show at Arts Centre Melbourne’s Fairfax Studio from 19 – 21 January 2017. The comic, cautionary and fake-bloody tale combines Shakespeare’s rich language with a healthy dose of invention and idiocy.

Lovers of Shakespeare will delight in this ‘Scottish play’ that tells a different sort of tragedy. Macdeth pulls no punches, featuring all the previously omitted scenes – the witches brewing up a hallucinogenic cat soup, King Duncan revealing his undying passion for chocolate cake, and the gothic love story of Macbeth and Lady Macbeth.

Created for children aged eight and above and their families, the show is perfect for kids who are new to Shakespeare or those who think the classics are a ticket to the land of sleep.

The side-splitting tale preserves all the murder and foul play; the injustice and cruelty, and the horror of one man’s ambition gone horribly wrong… albeit in a fun way. This is Shakespeare unplugged and re-wired, performed with stupidity and skill.

Company 13 is an Australian theatre company that was established in 2006 by 13 individual theatre professionals who all studied at the John Bolton Theatre School in Melbourne. The theatre professionals are trained in the Le Coq lineage of European physical theatre forms. Now distilled into a committed core group of four performer/devisors and one director, their aim is to create new Australian work that is visceral, immediate, unexpected and alive. Macdeth was developed with the assistance of Arts Centre Melbourne.