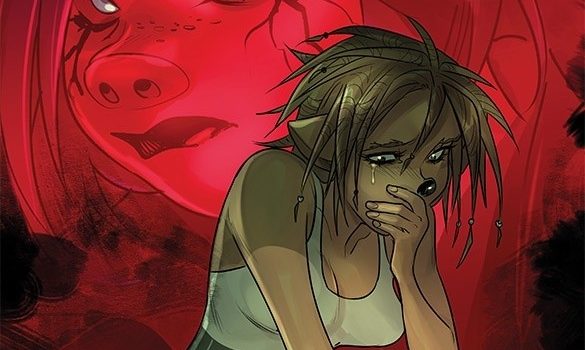 This series by Mirka Andolfo focuses on Leslie, a pig girl in a world full of anthropomorphic creatures living in a totalitarian society.  Inter-species mating is forbidden by the government, as they seek to prevent ‘unnatural’ relationships and ensure that the various species continue.  The series is an English adaptation that was previously released in Italian under the name Contro Natura.  In Unnatural #7 Leslie must navigate betrayal and danger at every turn.  As well, her dreams are inhabited by a strange lupine man.

The cover features Saya sitting and in some sort of distress.  One hand is covering her mouth, and tears are coming from her eyes.  She looks like she witnessed something disturbing.  Leslie’s face looms in the background, coloured in the same red hues as the rest of the background.  Her face is highlighted by some eye make-up that has clearly run due to tears.  She however, looks like she has no tears left.  The cover is well drawn and detailed. The use of red as the primary background cover will make it stick out on a shelf.

Unnatural #7 is a very well drawn book.  The characters are all very well rendered, and the detail and colouring are excellent.  This is especially true in regards to Carol’s facial disfigurement.  It is well drawn and well coloured, and looks consistent throughout the issue.

The background details are incredibly well done.  From the textures in the escape tunnel to the details of the motel room.  The attention to little details adds to the book, and the little details contribute to the overall atmosphere.  In the motel room you can see pieces of plaster that have peeled away, exposing the brick underneath.  This tells us that our protagonists are slumming it to avoid detection.

The art also does a great job of giving us a window into how our characters are feeling.  Saya’s facial expressions towards the end of the book show us the fear running though her without her needing to say a word.  Khal at times shows determination, introspection, and even flirting.  Andolfo’s attention to detail in the book really brings both the settings and characters to life.

Unnatural #7 begins with a body lying on the floor.  Some armed men have entered a home and shot the owner, who is lying in a pool of blood, phone in hand.  Luckily for those in hiding in his basement, he has enough energy to trigger an alarm to warn them that danger is upon them.  This is a safe house for those anthropomorphized individuals that are fleeing the regulations that force them to breed with only their own species.

In the process of escaping Carol is captured, and Leslie manifests the strength of a mysterious spirit that gives her the power to almost kill one of their potential captors.  This spirit seems to have some kind of lustful designs on her, and does have longer term consequences when it emerges.  Her relationship with this spirit unsettles her companions, and may lead to further complications in further issues.

This issue is well paced, and does a great job continuing the growth of the characters.

The issue is full of great art and is well written.  The mystery of the mysterious albino spirit and its relationship with Leslie continues to be an underlying theme of the book, and looks to drive future issues.  As well, the reactions of Saya and Khal upon seeing what this force’s influence on Leslie can do will also extend into the rest of the series.  This will likely have major consequences.

This is a well written and well drawn issue, and though it feels like more of a niche book, is still a solid read. 3.5 out of 5 stars. 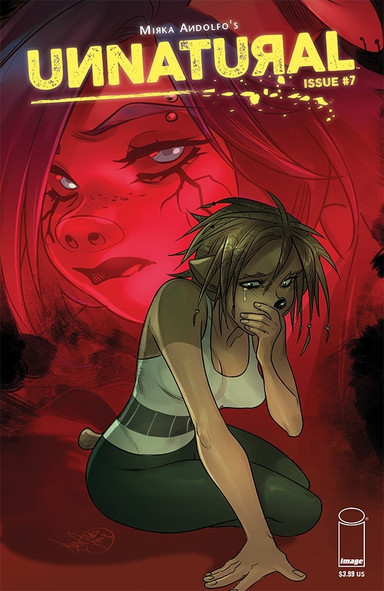