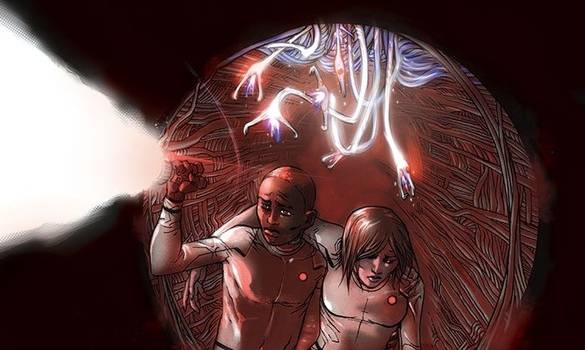 Summary: Ace and Valentina find the capitol and Dr. Jain turns out to be one bad apple.

This land is her land... wait.

The Story: Unity gets ugly.

Background: I called it with last issues cover!

(NOTE TO READER: This has been an extraordinarily hard year for all of us. I’m glad to be alive, back, and writing for you folks. Stay healthy!)

Summary: We open 17 years ago in the council hall in the Cheyenne Mountain Range, the president and A Sam Anderson are questioning Dr. Jain how the work on her territory is going. When Dr. Jair explains that her neuro link technology is working, the former two disagree. Sam asks why she is being so selfish and so single mindedly in her pursuit of her technology.

Sam mentions that that Unity is using way too much energy that is apparently generated from cyclotrons (PLOT POINT!). When Dr. Jain tries to explain that she is doing this for all the territories, representatives from the other territories say that they want no part of her vision.

Meanwhile, back in the current time, Valentina and Ace continue on the road that has opened up for them Valentina asks him what he’s looking for and he explains he is trying to find the location of a massive electromagnetic discharge that released 16 years ago in Unity. Apparently, the discharge was the only thing that was detected from America since the sealing, besides something called the Juneau Event. He explains that Aurora’s got a 48 year time variance (I think). Before we can go any further, the car hits a large dead floating whale carcass. It looks like a whale but has been eaten by a gigantic black techno shark.

Back in Unity City, the rest of our team is dealing with the insurgency from Destiny. They all take up arms to fight as Dr. Jain summons everyone who is connected to Unity to fight. Except for Chang that is. He has been infected by Unity and has no problem leaping towards the soldiers unarmed.

Valentina and Ace wind up at a model of the U.S. Capitol and barely make it there alive as there car is eaten by a whale. There they are met by a hologram of Sam Anderson. He tells them that some answers lie ahead, and that Dr. Jain made sure that Unity would succeed. After all, it is her land.

Just as the troops are starting to lose, Dr. Jain pretty much goes Super Saiyan and takes control of everything and absolutely demolishes Destiny’s forces. Dr. Jain then starts going a bit crazy and explains why and how she allowed her Unity to succeed. Chang agrees with her.

The issue ends with Ace and Valentina finding a room in the capitol building that has hundreds if not thousands of brains linked up to a computer. At first Ace assumes they are animal brains, but a voice tells him that they are childrens’. That voice turns out to be a completely withered Dr. Jane, who rests inside a controlling cocoon.

OK, so first, the whole premise of this series is based in science fiction, but it is impossible to see correlations with real life. Snyder must be a precog because the idea of a virus raging out of control and the US putting border walls up is just too close to home.

The cover to this issue shows what turns out to be Dr. Jain’s cocoon tendrils following Ace and Valentina down a hole. The previous cover already revealed Dr, Jain’s true form an issue early. That makes me wonder if the printers just screwed up. It is a strange way doing a monster reveal if they meant to do it this way.

So Dr. Jain has basically gone insane and is bending everybody to her will… Didn’t she learn anything from God? That’s why he gave us free will. It’s very obvious that controlling everyone’s mind caused her to age much faster than everybody else.

The cyclotron accelerators may be the books explanation for how time got all screwed up across the country, but the larger issue is that the timeline is starting not match up. America was sealed 50 years ago, but the conversation we see with the council takes place 17 years ago and then Ace says that the discharge happened 16 years ago. Does that mean the original idea that America was trying to institute ran for 34 successful years? Or maybe that means 16 years in relative Unity time? GAHHHHH TIME TRAVEL MAKES MY BRAIN HURT (and they haven’t even time traveled yet… I think?)

The next issue I think concludes the storyline. I don’t know if each storyline is just going to take place in a new zone, but I don’t care. The fact that a break is coming up soon is the more pressing matter. I don’t think I can make it between storylines without this book.