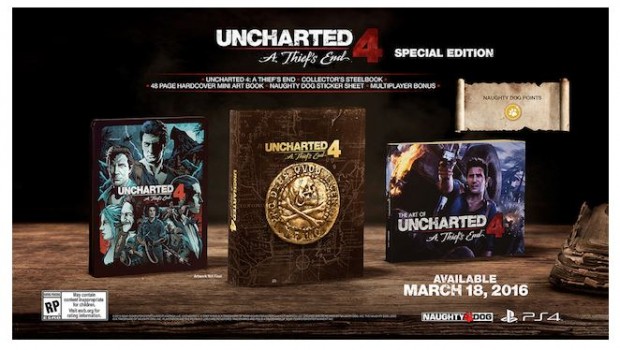 From humble beginnings to extraordinary discoveries, Nathan Drake will embark on his next adventure. Drake’s world is turned upside down when his older brother Sam, long believed dead, suddenly appears seeking his help. Together they will embark on a globe-trotting journey in pursuit of a conspiracy behind a long lost pirate colony and its fabled pirate treasure.

The Uncharted 4: A Thief’s End Special Edition (only available at select retailers) contains a premium, collectible treatment plus an inside look at Naughty Dog’s development process. It includes:

Accompanying this, the Uncharted 4: A Thief’s End Libertalia Collector’s Edition (only available at select retailers) includes everything listed above, plus:

If you want the complete digital experience you can pre-order the Uncharted 4: A Thief’s End Digital Deluxe Edition, which includes everything above plus:

The Triple Pack will also be available to purchase separately as an add-on. If you already pre-ordered Uncharted 4: A Thief’s End through the PlayStation Store, you can update to the Digital Deluxe Edition to nab the discount on the Triple Pack.