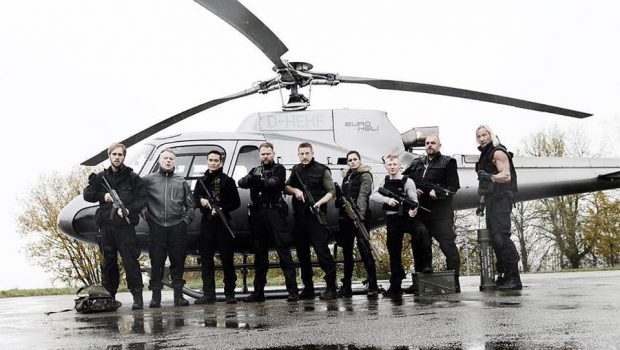 When their leader is attacked during a shocking and violent home invasion, a team of former commandos band together to seek justice and revenge through the only way they know how.

Ultimate Justice starts off with a hostage negotiation gone wrong, on so many levels. Opening in a nondescript junkyard with the capture of an “elite” group of soldiers during some sort of unexplained good guy/bad guy mission, Hawaiian-born actor Mark Dacascos (confusingly called Gustav-Ferdinand in this action clunker reefed from the darkened depths of 2016) leaps in to save his commando pals with a flourish of bullets and fly kicks.

His steroid-fuelled, gun-toting, plastic pals follow suit and massacre the faceless bad guys by kicking slightly near them and firing blanks haphazardly in their general direction. Through this WWE-style bravado, they succeed in rescuing at least half of their captive commando pals; however, this proves too much of an emotional experience for the Kevlar wearing ass-kickers, which leads the group to disband. Maybe if we had been given time to learn the names or the motivations of the characters killed in this opening sequence we would care this much too. Probably not though.

Moving forward and without any explaining why, Gustav’s boss Oberstleutnant Hans-Georg “Commander” Sturm (Wolfgang Riehm) is selling his tough-guys-shoot-everything business and retiring to a life of military dad jokes and dating women one-third his age. Gustav (who is only in his forties and also seems to be now retired) is still hanging around his old boss Hans-Georg like a desperate intern. The two of them then celebrate being conjoined morons by attending the worst party on Earth to re-enact their favourite scenes from a 1980s frat house film. During this gala of fools, this militant odd-couple succeed in bringing new meaning to lecherous as they both “flirt” with a lady seemingly detained at the rent-a-crowd party by some indescribable force of black magic.

Moving forward yet again, eight long years this time and almost feeling like real time during the experience of watching this film, Commander Strum is married with a child (suspension of disbelief is now a prerequisite to continue watching this film) that he shares with the aforementioned victim of black magic, while Gustav remains a sleaze.

During a trip to the country, Gustav and his new girlfriend visit the Commander and his wife at their country mansion during a montage copy and pasted from your choice of the latest luxury car commercials. Upon their arrival at what seems to be the stately manor featured in Antiques Roadshow, Han’s wife reveals to Gustav that the Commander is depressed. 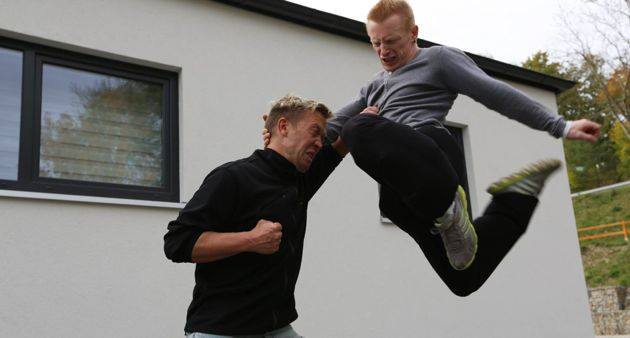 Struggling to understand her pension wielding husband, she confides in Gustav that she is unable to figure out the complex reasoning of his sadness beyond the “I used to shoot stuff, now I don’t….” scale of emotion. The night after Gustav leaves in his obnoxious sports car (that he annoyingly leaves parked across the middle of the road), someone breaks into the Commander’s house. Things get violent and horrible with director Martin Christopher Bode making sure to show us this violence blow-by-blow in a technique ripped straight from the Eli Roth school of trash filmmaking.

Seeking revenge and thankfully not jumping to another Marty McFly-esque gap in time, Gustav enters into nineties comedy/action territory as he rallies the rest of his Commando pals in an edit of scenes that can unfortunately only be described as “wacky”. Watching terrible actors try to act is hilarious. Watching terrible actors trying to pull off comedy is worse than receiving root-canal surgery without anaesthesia. This unasked-for quirkiness quickly gives way to ear-to-ear grinning torture scenes as the revenge-seeking Commandos try to acquire information to lead them towards their targets and ultimate goal of justice and unmistakable revenge. Compiling in character twists and a sleep-inducing cocktail of martial arts and generic action scenes, Ultimate Justice eventually closes with a groan and most probably a moan from anyone still able to endure the ridiculous final confrontation of the lead characters.

From the outset, it’s evident that this is a low budget film. A low budget doesn’t have to be a downfall when producing action films and can often, under the right direction, elevate a piece’s creativity (for those interested seeing a fine example of this check out Dog Soldiers, 2002). For Ultimate Justice, many of its problems rise immediately from the foundations. The script is outdated to the point where it should come stamped with a health warning and each character is so individually unlikeable or uninteresting the only intrigue surrounding this film is not in the story, but in trying to figure what misguided person would put any funding towards a tacky relic of a film such as this.

To have different international versions of the film Ultimate Justice has been dubbed in English. This drags the entire film further into laughable territory. Bad guys scream out in pain as their mouths are closed. Actors look like clay puppets as they talk and laugh out of synch like a bad late-night movie. The film would have greatly benefited from being recorded in English as it was being filmed, then subtitled for a wider audience. Diehard action fans aren’t afraid of non-mainstream (or subtitled) films and in underestimating their viewers the filmmakers have exceeded in making their film worse than it ever should be.

Ultimate Justice is exactly the kind of entertainment your mother was talking about when she used to say “Stop watching the TV, it will rot your brain.” The direction makes the action look ludicrous (not one practical bullet squib is used which adds a jarring cartoon stupidity to any onscreen shooting death) and the fits of torture present during some scenes are out of place and unfittingly brutal. The tone of this film completely wavers throughout and the characters are thoroughly stupid in their delivery and wholly unlikeable in their cardboard nature. Ultimate Justice is a terrible movie that would require A Clockwork Orange-style torture techniques for most viewers, including action fans, to get through it. To be like its predecessors of the genre, this film completely misses the mark by only offering terribly outdated and badly produced action sewn messily together by tacky male machismo.

Summary: Ultimate Justice is a terrible movie that would require A Clockwork Orange-style torture techniques for most viewers, including action fans, to get through it.