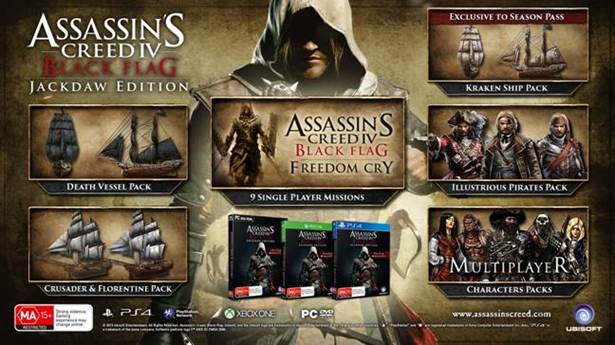 SYDNEY, AUSTRALIA – March 11 – Ubisoft® has announced details for the Assassin’s Creed® IV Black FlagTM Jackdaw Edition to be released in Australia and New Zealand on March 27, and available for PlayStation®4 from Sony Computer Entertainment Inc., for the Xbox One® video game and entertainment system from Microsoft, and Windows PC.

Death Vessel Pack – Show your enemies that you are ready to bring death upon them with the Death Vessel sails, figurehead and wheel.

Crusader & Florentine Pack – With these new cosmetic sets, sail with Altaïr or Ezio’s colors with 4 customization items for your ship and 2 new weapons for Edward.

Multiplayer #2 – Guild of Rogues – The Guild of Rogues Pack extends the multiplayer experience with three additional playable characters including the Stowaway, the Shaman and the Siren! This pack also comes with new customization options, and new moves!