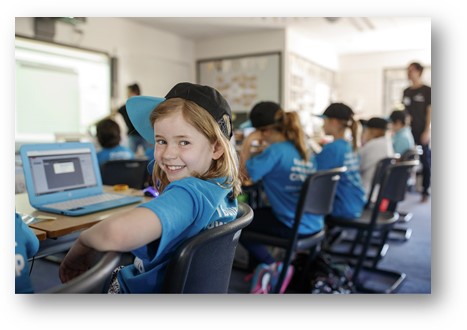 UBISOFT® PARTNERS WITH CODE CAMP TO TEACH KIDS HOW TO CODE WITH STARLINK: BATTLE FOR ATLAS™

Sydney, Australia — September 28, 2018 — Ubisoft® Australia has announced a partnership with Code Camp and Starlink: Battle for Atlas™ to give kids a first look at the benefits of learning to code and related careers.

In a special, one-day event at Ubisoft’s Sydney headquarters, a lucky group of kids will learn how to code their own unique Starlink: Battle for Atlas™ mini-game, as well as meeting Ubisoft developers to learn more about this creative and growing industry.  Code Camp students across the country will be given the opportunity to use Starlink: Battle for Atlas™ characters, spaceships and theming as part of Code Camp’s online coding platform, Code Camp World.

Coding has quickly become an essential skill for the future career development of today’s youth, Code Camp have taught over 40,000 kids to code and are the leading authority on kids’ coding education in Australia. They are on a mission to create 200,000 little coders by 2020 through holiday camps, in-school and after-school programs.

Video games are the fastest growing sector of the entertainment industry, generating billions in revenue and employing thousands worldwide. If your child has shown a passion for gaming or an interest in coding and you are excited at the thought of them stepping beyond the screen to learn more, Ubisoft and Code Camp are looking for twenty kids between the ages of 8-12 who can attend the camp in our Ultimo offices on Saturday, October 13.

On the day, all catering and equipment including laptops will be provided, as well as an exclusive peek at Starlink: Battle for Atlas™. Parents in NSW can apply for the chance to win a spot for their child here, parents outside of NSW can also enter to win a free Code Camp spot for their child plus a Starlink: Battle for Atlas™ starter pack on the platform of their choice.

Starlink: Battle for Atlas™ is an open world, action-adventure game where players assemble a modular starship, link it to their game controller and launch into an epic adventure across the exotic Atlas™ star system. Use pilots, ships, wings, and weapons to assemble the starship of your dreams with an unprecedented level of customization and creativity. Starlink: Battle for Atlas™ is out October 16 and will be available on Nintendo Switch, PlayStation 4 and Xbox One.

Click image below to view “How it works” trailer

Ubisoft is a leading creator, publisher and distributor of interactive entertainment and services, with a rich portfolio of world-renowned brands, including Assassin’s Creed, Just Dance, Tom Clancy’s video game series, Rayman, Far Cry and Watch Dogs. The teams throughout Ubisoft’s worldwide network of studios and business offices are committed to delivering original and memorable gaming experiences across all popular platforms, including consoles, mobile phones, tablets and PCs. For the 2017–18 fiscal year Ubisoft generated sales of €1,732 million. To learn more, please visit www.ubisoft.com.