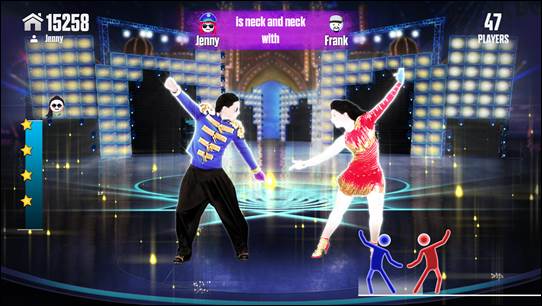 Sydney, Australia – December 12, 2014 – Today, Ubisoft announced they have teamed up with Red Chillies Entertainment and Hungama Digital Media Entertainment to include India Waale, from the Bollywood film “Happy New Year,” in the new mobile game Just Dance Now. The song has been launched in-game in parallel with the film’s worldwide premiere and will be available soon for Just Dance 2015.  Happy New Year stars Shah Rukh Khan and is already Bollywood’s highest grossing film of 2014*. This initiative is part of Just Dance’s strategy to appeal to an expansive global audience while exploring partnerships with regional artists who have worldwide appeal.

The success of local music in Just Dance

After seeing the success of local tracks in their countries of origin in previous editions of Just Dance, the team committed to making localised content available for worldwide fans everywhere. As Just Dance Now is playable with devices you already own, it has a global reach that brings great opportunities by exploring new territories that love to dance.

“We collaborate with our local offices all over the world to stay on the pulse of pop music and determine the most popular regional songs for the game”, said Jason Altman, Executive Producer. “With India Waale, our Pune, India studio identified and ultimately secured this hugely popular song for us. This is only the beginning of a global approach to achieve local relevancy. Looking ahead, we are very excited about our upcoming release in China!”

To get the India Waale map for Just Dance Now, players can download the app for free on Google Play or on the App Store. Additionally, it will be available in January for download on every platform in Just Dance 2015.

“India Waale is the perfect track for Just Dance: extremely fun, with dynamic choreography, and a strong Bollywood style,” said Nicolas Becquemin, Director of Operations at Ubisoft Pune, India. “With Bollywood being a global entertainment genre, we are really proud as a local studio actively is working with great Indian talents to bring such iconic content to one of the world’s most successful video game franchises. With one of the fastest growing smartphone market in the world, we are confident that India is ready to embrace the Just Dance experience too.”