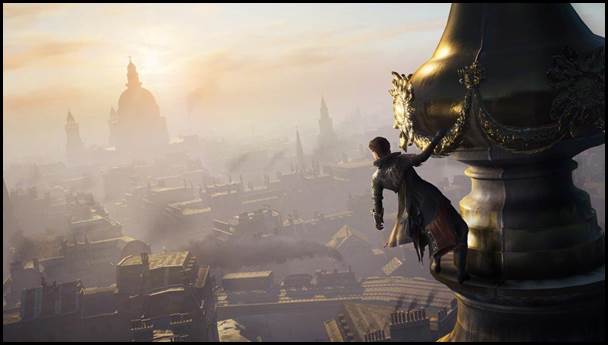 Sydney, Australia – October 23, 2015 – Today, Ubisoft® announced that Assassin’s Creed Syndicate is now available across retailers worldwide on the PlayStation®4 computer entertainment system and Xbox One.  Set in London during the height of the Industrial Revolution, players will step into the shoes of twin Master Assassins, Jacob and Evie Frye. Fighting to liberate London, Jacob and Evie help define the birth of organised crime in an adventure filled with action, intrigue and brutal combat.

Led by Ubisoft Quebec*, Assassin’s Creed Syndicate introduces an array of new weapons and skills. Along with Jacob’s brawn and Evie’s stealth, players use a new arsenal of weapons, including the kukri knife, brass knuckles, and cane sword in brutal combat and utilise the brand new rope launcher to scale buildings in seconds or take enemies by surprise.

With the Season Pass included in the Gold Edition of Assassin’s Creed Syndicate, players can delve deeper into London in 1868 and beyond with new missions including The Last Maharaja, A Long Night, Streets of London with new gear, weapons, outfits and a permanent XP boost. Players brave enough will visit London in 1888, the height of the Jack the Ripper killings to take-on the world’s most infamous serial killer in a deadly game of cat and mouse.

Additionally, PlayStation®4 players will be challenged to investigate The Dreadful Crimes, a series of odd murders taking place in Assassin’s Creed Syndicate’s Victorian London. These ten exclusive missions are directly inspired by the Penny Dreadful stories, weekly pocket novels very popular amongst the working class in 19th century London that narrated fictitious and sensational crime stories. Players will find clues and question multiple witnesses as they progress through stories based on the works of Victorian detective writers.

The Windows PC version of Assassin’s Creed Syndicate will be available worldwide on November 19.

Assassin’s Creed Syndicate players can unlock exclusive content for the game via the Ubisoft Club, which launched earlier this week. For players of previous Assassin’s Creed titles, the Club offers the benefit of exclusive outfits from previous Assassin’s Creed protagonists such as Ezio, Shao Jun, Aveline, Elise and Edward. As they gain experience points and unlock badges, Club members can also redeem Units for six exclusive rewards, such as unique weapons, color schemes for their wardrobe and the official soundtrack. The Ubisoft Club is free and can be accessed at any time, without ever leaving the game.