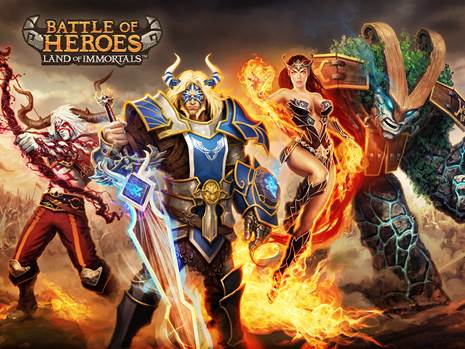 Sydney, Australia – November 7, 2014 – Today, Ubisoft announced Battle of Heroes: Land of Immortals, a brand new free-to-play strategy and RPG mobile game is now available on the App Store, Google Play and Amazon app store. Players will create their own fantasy world where they will be able to control their Heroes and cast devastating spells, train lethal units, defend their city and fight against other Heroes to conquer Evagar.

Players will use their Hero’s skills and abilities to cast meteoric spells and unlock new Heroes as they defeat foes and build up their citadel with outposts, catapults, archers, mages and warriors. Support units including archers, warriors, wall breakers, riders and mages can be trained to fight alongside Heroes to help turn the tide of battle. With 3D graphics players will get lost in the beauty and battlefields of Evagar.

Playable in single player or player versus player, Battle of Heroes: Land of Immortals lets players choose what type of experience they want to enjoy. For players looking for competition they can face off with rival players and pit their Heroes against each other to fight their way up the leaderboard.

For more information on Battle of Heroes: Land of Immortals visit https://www.facebook.com/battleofheroes.ubisoft

For the latest on all of Ubisoft’s games, please visit www.ubiblog.com