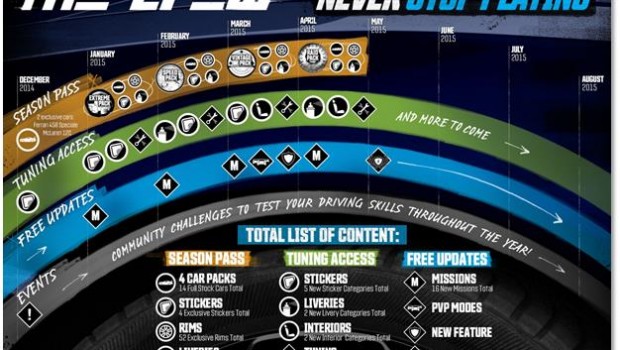 SYDNEY, AUSTRALIA — November 7, 2014 — Ubisoft® has revealed Season Pass and live content details for the action-driving MMO, The Crew™. The first of four themed Car Packs, new missions, new stickers and tuning kits will start rolling out to players from January 2015 with new PvP modes to follow shortly after.

Season Pass holders will have access to two exclusive cars at launch on December 2 and will receive early access to each of the four car packs one week in advance. Each pack will be available for purchase on its own for $9.99, or all packs can be purchased as part of the Season Pass for $29.99.

The Crew Season Pass will be available for the Xbox One and Xbox 360® video game and entertainment systems from Microsoft, PlayStation®4 computer entertainment system, and Windows PC. It will be included in The Crew Gold Edition. This digital edition is available on the Uplay® Shop across PC digital channels as well as on PlayStation® Network and Xbox Live (Xbox One only).

With the release of each content pack included in the Season Pass, there will be new missions corresponding with each pack’s theme, available to all players free of charge. New customization options, paint jobs, rims, interiors and tuning specs will also be released on in-game stores.

The 2014 Game Critics Awards Best Racing Game of E3[i], The Crew takes gamers on a wild ride throughout a massive open world recreation of the United States filled with exciting challenges and populated by other real players. The Crew will be available on December 2 for PlayStation®4 system, Xbox One, Xbox 360 and Windows PC.