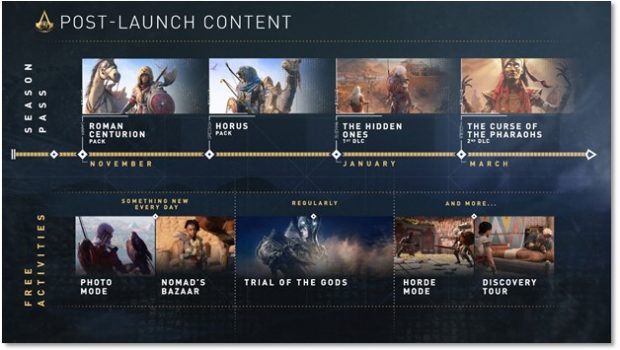 Sydney, AUSTRALIA — October 11, 2017 —Ubisoft has revealed details of Assassin’s Creed® Origins post-launch content, including the season pass and free add-on content available to all players. Players will be able to continue exploring a vast and mystical Ancient Egypt thanks to wide variety of post launch content including several hours of new storyline expansions & quests, timed events and customization items.

The season pass is included in the Assassin’s Creed Origins Gold Edition and is also available for purchase separately for $39.99.

On top of that, an extensive lineup of free content filled with new challenges and gameplay opportunities will be available for all players at or after the launch of the game, including:

Assassin’s Creed Origins is a brand new vision for the franchise embracing Action-RPG elements where players level up, loot, and choose their abilities to customize their very own skilled Assassin. They will experience a completely new combat system allowing them to attack and defend multiple enemies at once and equip ultra-rare weapons against unique and powerful bosses. A revamped narrative experience allows total freedom for players to choose and complete quests at their own pace, each telling an intense and emotional story full of colorful characters and meaningful objectives. With an entire country to explore, from deserts to lush oases, from the Mediterranean Sea to the tombs of Giza, players will fight against dangerous factions and wild beasts as they explore this gigantic and unpredictable land.