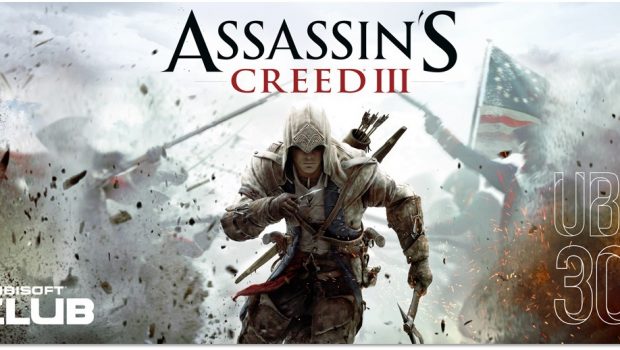 WHAT: To celebrate Ubisoft’s 30th anniversary, the Ubisoft Club is giving all players the opportunity to discover or rediscover Ubisoft’s classics for free. As announced at E3, every month until the end of the year, the Ubisoft Club is giving away one Ubisoft digital PC game acclaimed for its quality, innovation and creativity. This month’s free game is Ubisoft’s Assassin’s Creed III, a third-person action-adventure title set in an open world in which the player uses a combination of stealth, parkour and combat.
WHO: Ubisoft Club members worldwide

WHY: Set against the backdrop of the American Revolution in the late 18th century, Assassin’s Creed III introduces a new hero, Ratohnhaké:ton, of Native American and English heritage. Adopting the name Connor, he becomes the new voice for justice in the ancient war between the Assassins and Templars. Players become an Assassin in the war for liberty against ruthless tyranny. Assassin’s Creed III spans the Revolutionary War, taking gamers from the vibrant, untamed frontier to bustling colonial towns and the intense, chaotic battlefields where George Washington’s Continental Army clashed with the imposing British Army.