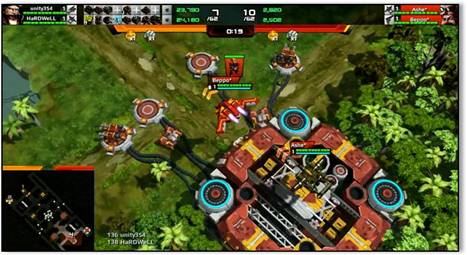 Sydney, Australia – April 8, 2014 – Ubisoft® has announced a partnership with Carbon Games to bring AirMech® Arena to Xbox Live online entertainment network from Microsoft. The fast-paced, free-to-play PC game will be available for download on Xbox 360® games and entertainment system from Microsoft this summer.

“As an indie developer, AirMech has been our passion for the past several years, and we are thrilled to partner with Ubisoft to bring the game to console,” said James Green of Carbon Games. “AirMech Arena was created from the ground up to be the ultimate RTS experience with a gamepad. The fast-paced action and depth of strategy brings console gamers a new experience we are confident they will enjoy.”

In a war-torn future, powerful weapons known as AirMechs dominate the battlefields in the fight for scarce resources. Players command giant transforming robots and capture and protect bases while building colossal armies to fight waves of enemies. As gamers conquer fortresses, they unlock powerful units, pilots, items and AirMechs, and can customise their armies to fit their personal gameplay preferences.

AirMech Arena supports single-player, multiplayer cooperative and multiplayer competitive gameplay for teams of two to three players. Teamwork is vital to succeed in multiplayer as players must work together to defend their fortresses against an onslaught of relentless enemies.

“We had our eye on AirMech and Carbon Games for quite a while before we approached them,” said Thomas Painçon, EMEA FTP Publishing Director at Ubisoft Entertainment. “AirMech Arena is a great addition to Ubisoft’s portfolio on console, bringing in competitive framework and strategy games into our strong console digital line-up.”