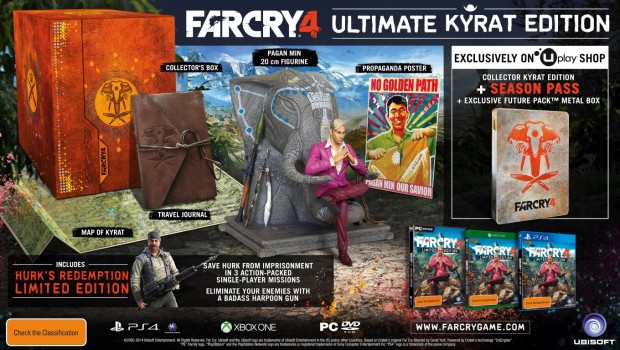 SYDNEY, AUSTRALIA — July 4th 2014 — Ubisoft® has announced the launch of pre-orders for the most complete Far Cry® 4 package available: the Ultimate Kyrat Edition. Presented in an exclusive box, this definitive fan package will include all the elements featured in the Kyrat Edition and in the Limited Edition as well as the Season Pass that will allow players to get access to the forthcoming Far Cry 4 downloadable contents. Only available in European, Middle East and Asian (EMEA) territories including Australia and New Zealand, players willbe able to purchase this Ultimate Edition for PlayStation®4 computer entertainment system, Xbox One, games and entertainment system from Microsoft and Windows PC, on the uPlay Shop – shop.ubi.com/UltimateKyratEdition.