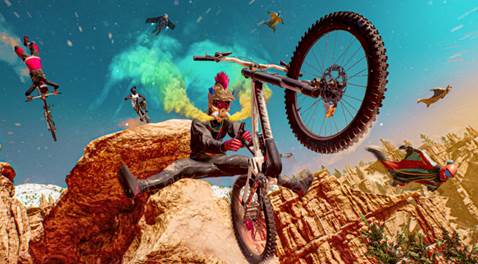 Today at Ubisoft’s digital press conference, Ubisoft Forward, the company announced Riders Republic™, a new IP and massive multiplayer outdoor sports playground. Riders Republic will release worldwide on February 25, 2021 on PlayStation®5, PlayStation®4, Xbox Series X, Xbox Series S, Xbox One, Stadia and Windows PC, exclusively on both the Epic Games Store and the Ubisoft Store. The game will also be available on UPLAY+, Ubisoft’s subscription service.* Players who purchase Riders Republic on Xbox One or PlayStation®4 can upgrade their game to the next-gen version at no additional cost.**

Developed by Ubisoft Annecy, Riders Republic invites players to an exhilarating social playground, where they can experience the thrill of extreme sports in an open and densely populated world. Players will connect, compete and slay tricks through an exciting range of sports such as biking, skiing, snowboarding, wing suiting and rocket wing suiting. Whenever players explore or gather in the vibrant social hub, they will always find themselves surrounded by fellow riders.

From arid canyons to snowy mountains, Riders Republic allows players to ride through some of the most magnificent destinations on earth. The American National Parks, Bryce Canyon, Yosemite Valley, Sequoia Park, Zion, Canyonlands, Mammoth Mountain and Grand Teton have been faithfully recreated and imaginatively mashed together to create the liveliest sports park.

Players can squad up with or against friends in these insane multiplayer modes:

“We wanted to combine our love for extreme sports with an adrenaline-filled multiplayer experience, letting players share those unique riding moments with more than 50 other players at all times,” said Igor Manceau, Creative Director of Riders Republic at Ubisoft Annecy.**** “Riders Republic offers fun and light-hearted competition and allows us to push the boundaries with this genre. We can’t wait for riders to dive into this dynamic world and share their own epic stories.”

With career mode, riders can make a name for themselves in a variety of sports, rise to the top of the leaderboard and sign with legendary sponsors from a wide range of outdoor action sports.  Players can customize their rider through evolutive, progression-based gear and define every aspect of the avatar. Whether a rider wants to master snowboarding or be the fastest thing on two wheels, everything is possible.

Riders Republic will make the most of next-gen gameplay, running at 60 FPS and displaying more than 50 players simultaneously live onscreen on next-gen consoles. With the game’s very intuitive character and camera control combined with an innovative trick system, all players, casual and hardcore, will have the chance to experience untapped joy from the very beginning.

In addition, the Gold Edition and Ultimate Edition are available for pre-order.