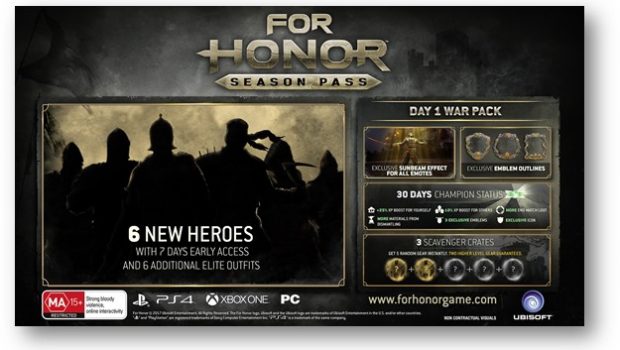 SYDNEY — February 3, 2017 — Ubisoft has announced that the For Honor season pass will include six all-new Heroes available seven days before they are released to all players plus additional in-game gear and 30-day Champion Status, which will give players more experience points and loot. Additional post-launch content, including new maps, modes and gear will be available for free to all players.

o    One exclusive sunbeam effect on emotes for all Heroes

All Season Pass content, except the six post-launch Heroes and their elite outfits, will be available at launch on February 14, 2017. The new Heroes will be progressively released by batches of two at the beginning of a new Season of the Faction War – the persistent cross-platform metagame that will evolve the war across the For Honor world. After this early-access period, these Heroes can be unlocked via Steel, the For Honor in-game currency given for completing matches and in-game challenges.

Players looking to hone their skills before launch can join the For Honor open beta from February 10 to February 13, 2017. This beta will include the new Elimination mode, a best of five rounds four-versus-four match with no respawns. Elimination joins three additional modes playable in the open beta including Dominion, Brawl and Duel, and nine playable Heroes. At launch, For Honor will feature twelve playable Heroes and five different multiplayer modes.

Developed by Ubisoft Montreal in collaboration with other Ubisoft studios*, For Honor offers an engaging campaign and thrilling multiplayer. Players embody warriors of the three Great Factions – the bold Knights, the brutal Vikings and the enigmatic Samurai – fighting to the death on intense and believable melee battlefields. The Art of Battle, the game’s innovative combat system that puts players in total control of their warriors, allow them to utilize the unique skills and combat style of each Hero to vanquish all enemies who stand in their way. For Honor will be available on February 14, 2017.

For more information about For Honor, please follow us on Facebook at www.facebook.com/ForHonorGame and on Twitter at www.twitter.com/ForHonorGame. For the latest on all of Ubisoft’s games, please visit www.ubiblog.com.