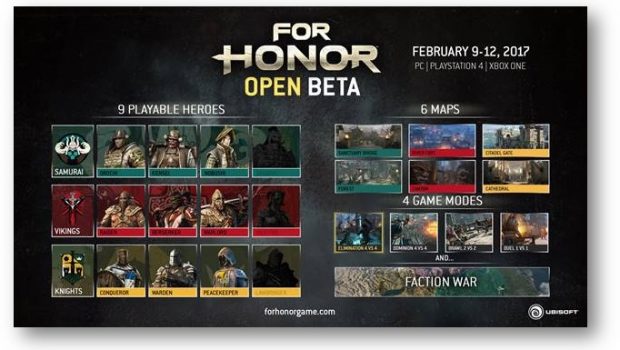 SYDNEY — February 1, 2017 — Today, Ubisoft® announced that the For Honor™ Open Beta will be available to all players in Australia and New Zealand from February 10 to February 13 on current-gen consoles and PC. Prior to the Open Beta and to continue the War of the Factions, Ubisoft will dispatch some of the fiercest warriors including Lauren Cohan, Jason Momoa, Alfie Allen and Demetrious Johnson, as well as several of the top Twitch streamers to pledge their swords in a live For Honor battle taking place on Tuesday, February 7 at 11:00 p.m. CET Paris Time. This live War of the Factions competition will showcase a new Elimination mode and be livestreamed on the For Honor Twitch channel: https://www.twitch.tv/forhonorgame.

Players can continue to hone their skills on the battlefield by joining the For Honor open beta from February 10 to February 13. This beta will include the new Elimination mode, a best of five rounds four-versus-four match with no respawns. Elimination joins three additional modes playable in the open beta including Dominion, Brawl and Duel, and nine playable Heroes. At launch, For Honor will feature twelve playable Heroes and five different multiplayer modes.

The War of the Factions will continue into the open beta giving even more players a chance to fight for one of the three Factions – Knights, Samurai and Vikings. Vikings are currently leading the War of the Factions following the closed beta, which pulled data from the performance of players across all three platforms. Although the Vikings are presently in the lead, Samurai and Knight players have the chance to lead their Faction to victory during the open beta and earn rewards when For Honor launches on February 14, 2017.