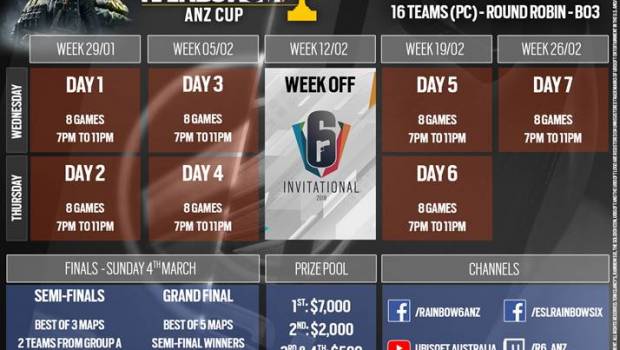 SYDNEY, AUSTRALIA — January 18, 2018 — Ubisoft® has announced the first Tom Clancy’s Rainbow Six® ANZ Cup for 2018 will commence Wednesday 29th January. 16 Teams from Australia and New Zealand will compete in a Best-Of-3 Round Robin PC tournament up until Finals Day on Sunday 4th March, with the Top 4 teams sharing in a prize pool of $10,000 AUD.

The ANZ Cup will be played on PC with 8 Pro League teams making up half the roster and the remaining 8 slots being filled by the best up-and-coming teams playing in the current Rainbow Six Go4, an online community tournament. The ANZ Cup will be divided into two groups with each team playing all opposing teams in their group once. Rounds will be played on Wednesday and Thursday nights from 7PM to 11PM AEDT, with select matches to be livestreamed on Ubisoft Australia’s YouTube channel, twitch.tv/r6_anz and facebook.com/Rainbow6ANZ/.

Console players can register for their respective Community Cups on Xbox One and PS4.