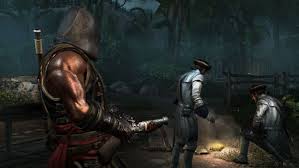 A Season Pass will be available for purchase at the launch of the game on PlayStation 4, Playstation 3, Xbox One, Xbox 360 and PC, and will include  the below downloadable game content at a 20 percent discount:

–      Freedom Cry: Born a slave, Adewale found freedom as a pirate aboard the Jackdaw as captain Edward Kenway’s second-in-command. Fifteen years later, Adewale has become a trained assassin and finds himself shipwrecked in Saint-Domingue with no weapon nor crew, starting a new adventure of his own.

–      The Exclusive Kraken Ship Pack – Only available to Season Pass owners, this pack includes personalization elements for the Jackdaw

Assassin’s Creed IV Black Flag Season Pass grants a 20 percent savings off the regular price of each individual downloadable pack to be released before March 2014, and is available on PlayStation 4, Playstation 3, Xbox One, Xbox 360 and PC.