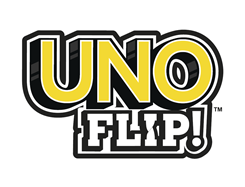 TURN THE TABLES WITH UNO FLIP

Today, Ubisoft announced that UNO Flip!™, the latest DLC for UNO® will turn the well-known card game rules upside down as it releases on PlayStation®4 computer entertainment system, the Xbox One family of devices including the Xbox One X, Windows PC and Nintendo Switch™ system. UNO Flip! is the UNO card game you know with an exciting new twist: a double-sided deck that gives classic gameplay a competitive edge.

Switch between the light and the dark sides by playing the brand-new Flip card and get ready to shake things up with unique action cards:

For those who want to draw even more, UNO Ultimate Edition is bundled with UNO and UNO Flip! and includes UNO Just Dance®, Rayman®, Rabbids® and winter themes. These variations remix the fun in different ways by adding new theme cards that require different strategies for players to win.

In UNO, players take turns matching a card in their hand with the colour or number card shown on the top of the deck. In addition to classic UNO gameplay, the UNO video game will also have a variety of online and social features. Players will have the ability to drop in and out of game as well as connect with family and friends using voice and video chat. To up the ante, players who strategize and stack their way to winning matches can snag a spot on weekly and global leader boards. Additionally, the UNO video game will give players interactive tutorials, in-game tips and the display of house rules before every match.