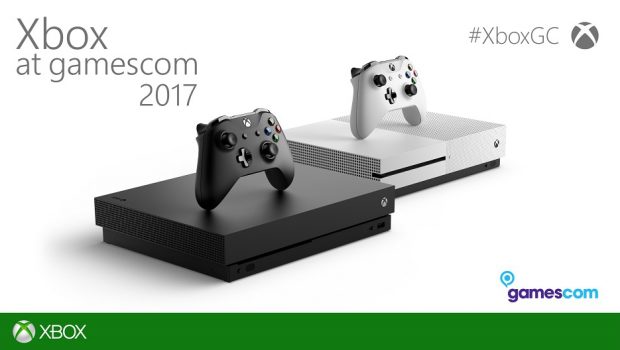 Tune In for Xbox @ gamescom Live This Weekend

gamescom is just around the corner and we can’t wait to kick the week off with Xbox @ gamescom Live this Sunday.

Don’t forget to tune in Sunday at 9:00pm CEST / 8:00pm BST / 12:00pm PDT so that you can be the first to hear the latest news on highly anticipated games coming to the Xbox family and Windows 10. We’ll have world premiere trailers and, of course, more about the most powerful console ever made, Xbox One X.

What’s more, you can sign in to your Microsoft account at Mixer.com and you’ll be in with a chance of winning lots of great prizes and be able to ask questions to the teams behind your favorite games. We’re excited to show you what we’ve been up to since E3, so be sure to tune in!

Here’s more info on Xbox @ gamescom Live and our other gamescom activities this weekend and into next week.

This year’s show will be hosted by Graeme Boyd (aka @AceyBongos), Xbox Germany’s Maxi Graeff (@GMaxee), and Julia Hardy (@itsJuliaHardy). They’ll have news to share, games to show off, will sit down to talk with developers from fan favorite studios and play some of the year’s hottest games yet to be released. The stream will be hosted on Mixer.com and via the Mixer app. We’ll have three URLs for the show, the countdown for which begins one hour before the livestream begins.

On Monday, we will celebrate the 20th anniversary of the Age of Empires franchise with a special livestream event in Cologne, alongside some of our biggest fans. The livestream will celebrate the rich history of the beloved PC game series, as well as give fans a first-look at Age of Empires: Definitive Edition, the beautifully remastered edition of the classic strategy game. We’ll be talking all things Age of Empires with some of the legendary developers who worked on the games as well as sharing some exciting news that you won’t want to miss – watch on the Age of Empires channel on www.mixer.com/AgeofEmpires or through the Mixer app.

Gamers in Germany will be able to get hands on Xbox One X for the first time at the Xbox booth when gamescom officially opens at the Koelnmesse on Tuesday, August 22. We’re back in Hall 8 of the Koelnmesse, North entrance, this year and you won’t want to miss the opportunity to play a wide collection of the games coming to Xbox over the next 12 months. See below for the show opening times:

Throughout the week, we’ll be tweeting, live streaming and sharing news and content via social media – twitter, snapchat, Facebook, Mixer, etc, most often using the hashtag #XboxGC. Whether in person or online, you won’t want to miss what we have in store this year!