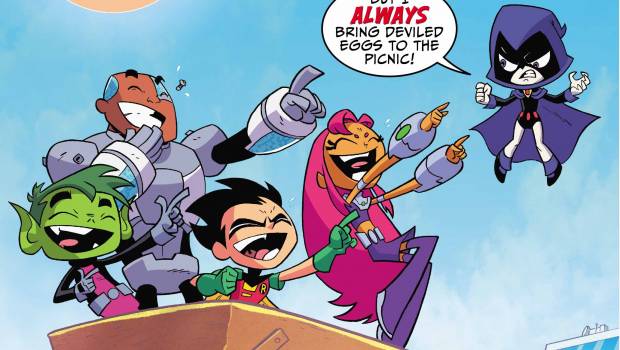 Summary: Great entry point for a casual reader, and a perfect fit for all audiences.

“Picnic” and “Burrito-ing the Hatchet”

This issue of Teen Titans Go! contains two unconnected stories.  It is very easy to get into and doesn’t require past reading to know what’s going on.  This series is clearly for all audiences and is a perfect book for kids. 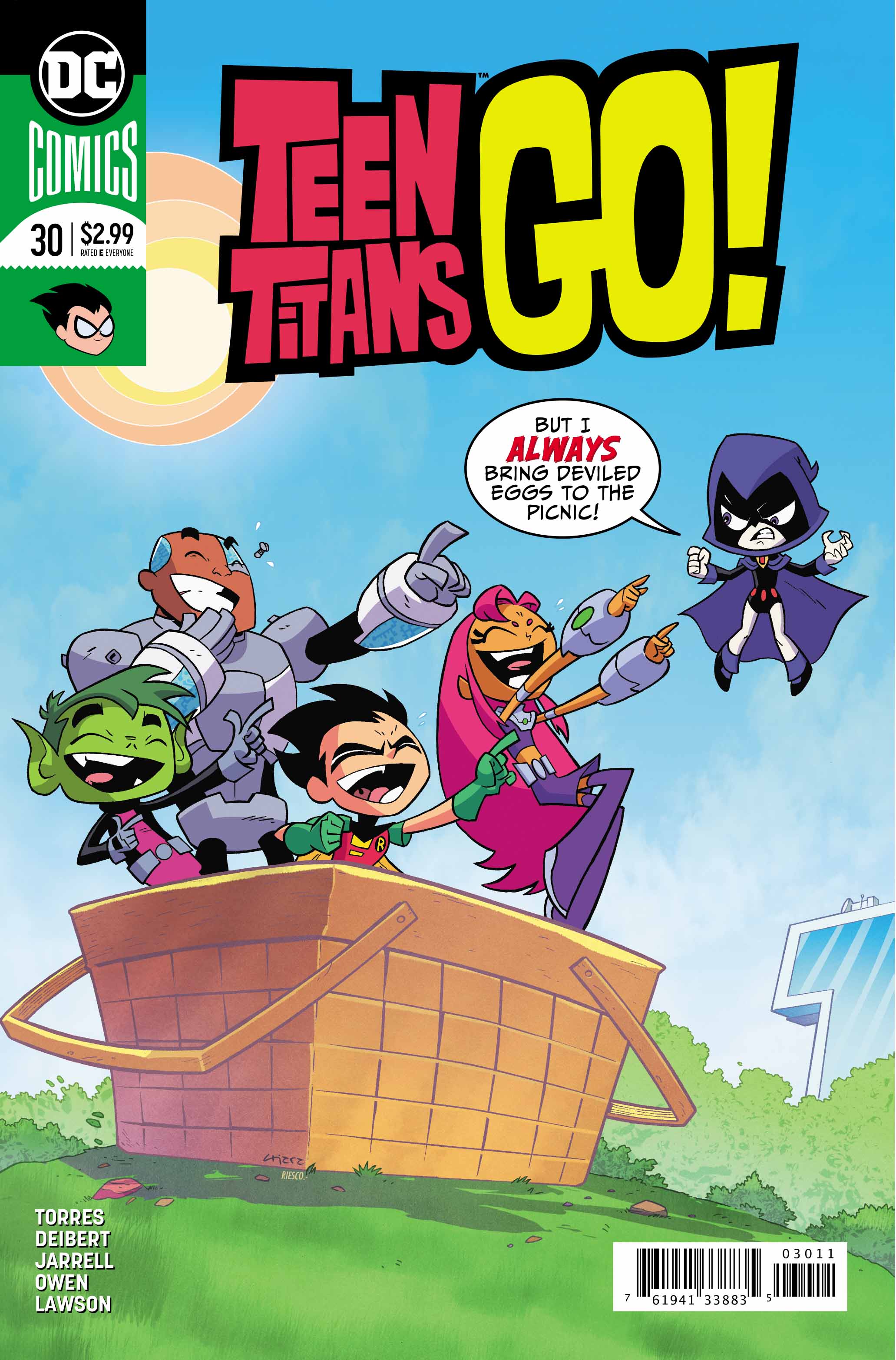 Dario Brizuela and Franco Riesco collaborated for the cover on this issue.  Its style is a great reflection of the Teen Titans Go! Animated series and keeps the issue in line with the brand.  It features most of the team atop a picnic basket, all pointing at Raven and laughing.  Raven is clearly annoyed and even makes a reference to deviled eggs – and her own demonic heritage.  It’s a light cover and though it does foreshadow some conflict within the team, based on the demographic it is aimed at, we know it will be resolved by the end of the issue.  This cover is bright, colourful, and fun. 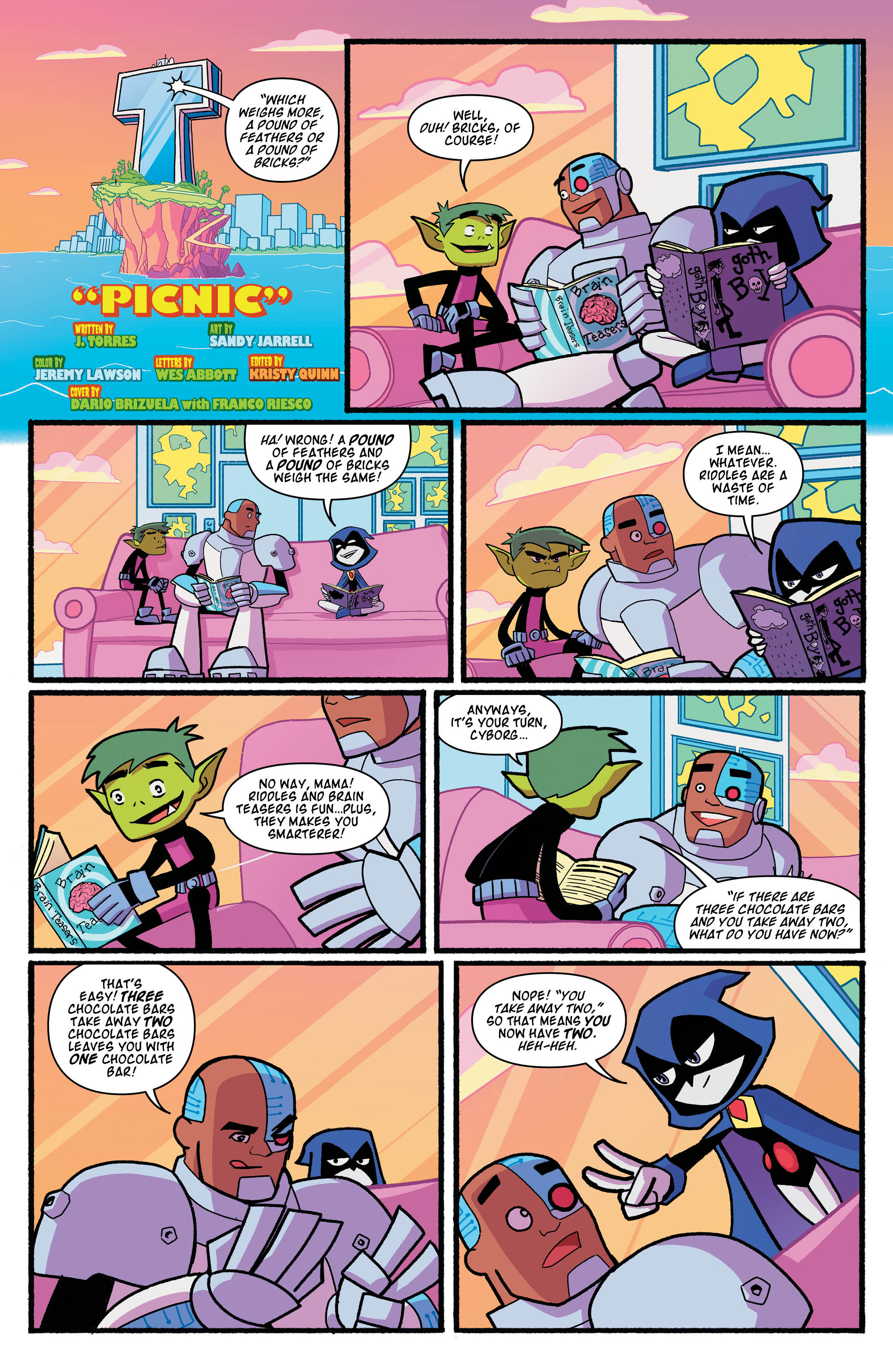 The first story, “Picnic”, is done by Sandy Jarrell.  Jarrell sticks very close to the Teen Titans Go! style, but adds his own flair to the characters.  They appear softer than in the animated series and a little more childlike.  This in my eyes is perfect for a younger audience, as kids love seeing super-heroes that they can identify with.  The first story is well drawn and the art creates a fun feeling that keeps the reader engaged.

The second story is done by Erich Owen.  The art here is pretty much indistinguishable from the animated series.  The characters look great, and the colour pops throughout.  The antics of the team are well drawn, and look exactly how you would expect them to look.  “Burrito-ing the Hatchet” looks good.

Both stories in this book look great.  The artists add their own little touches, but each feel exactly as one would expect a Teen Titans Go! story to look.  It’s on brand and consistent, and perfect for the target audience. 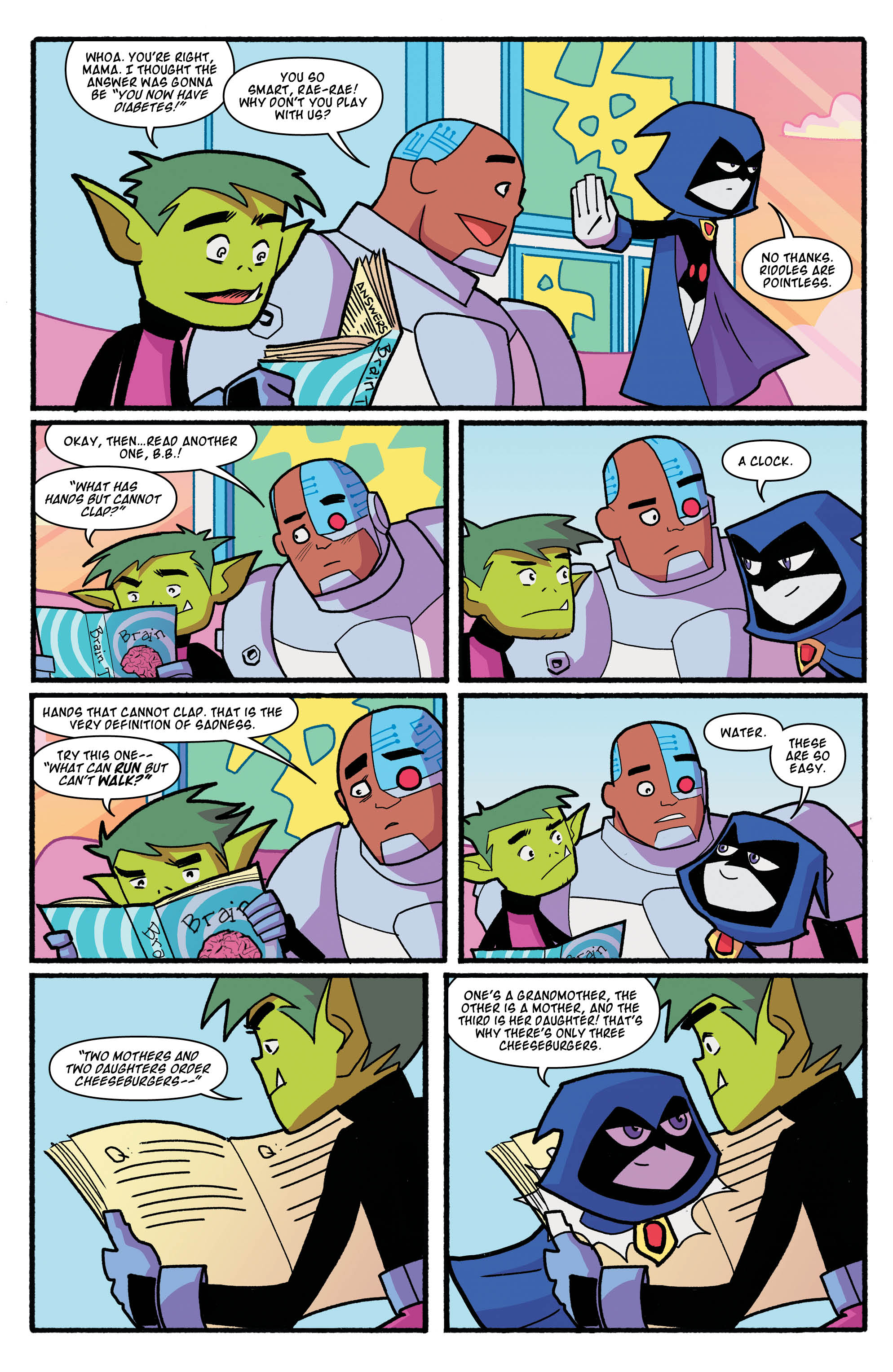 Torres writes the first story “Picnic”, which shows the team engaging in a contest of riddles. It begins with Beast Boy and Cyborg exchanging riddles. All of which are easily answered by Raven, who all the while insists she doesn’t want to play.  Robin then comes in and begins a riddle that the whole team soon clues in on.  Except Raven.  The story continues with Raven pestering Robin with guesses until she loses her temper and gets it by accident.  A fun story with a great campfire riddle at its core.

Amanda Deibert wrote the second story in this issue, “Burrito-ing the Hatchet”.  This story begins with the team devouring burritos.  Beast Boy shows up late, only to discover that all the vegan burritos have been eaten, leaving only meat behind.  Beast Boy leaves, devastated that his friends left nothing for him to eat.  Cyborg feels guilty, and pulls out a map to the ingredients of the greatest vegan burrito ever.  The team reasons that finding these ingredients and making their friend and teammate the perfect vegan burrito will allow them to make things right.  The team undergoes many trials and eventually succeeds. 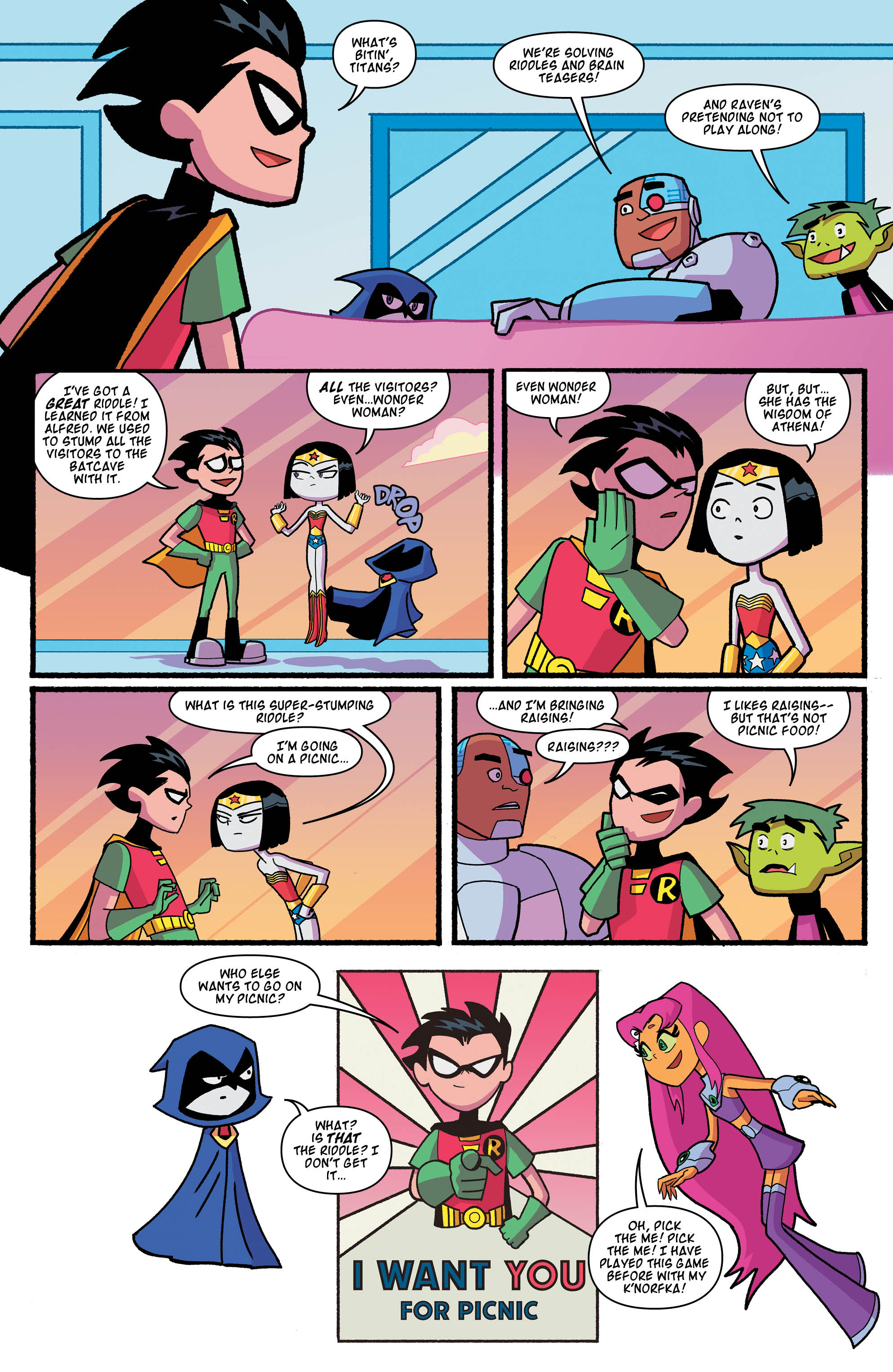 This issue is a great entry point for a casual reader, and a perfect fit for all audiences.  The art is in line with the Teen Titans Go! brand, with little touches from the artists that set it apart just a bit.  The art supports the story and it feels very much like a Teen Titans Go! story throughout.  This is a fun issue that is well written and the characters are exactly what we would expect them to be. 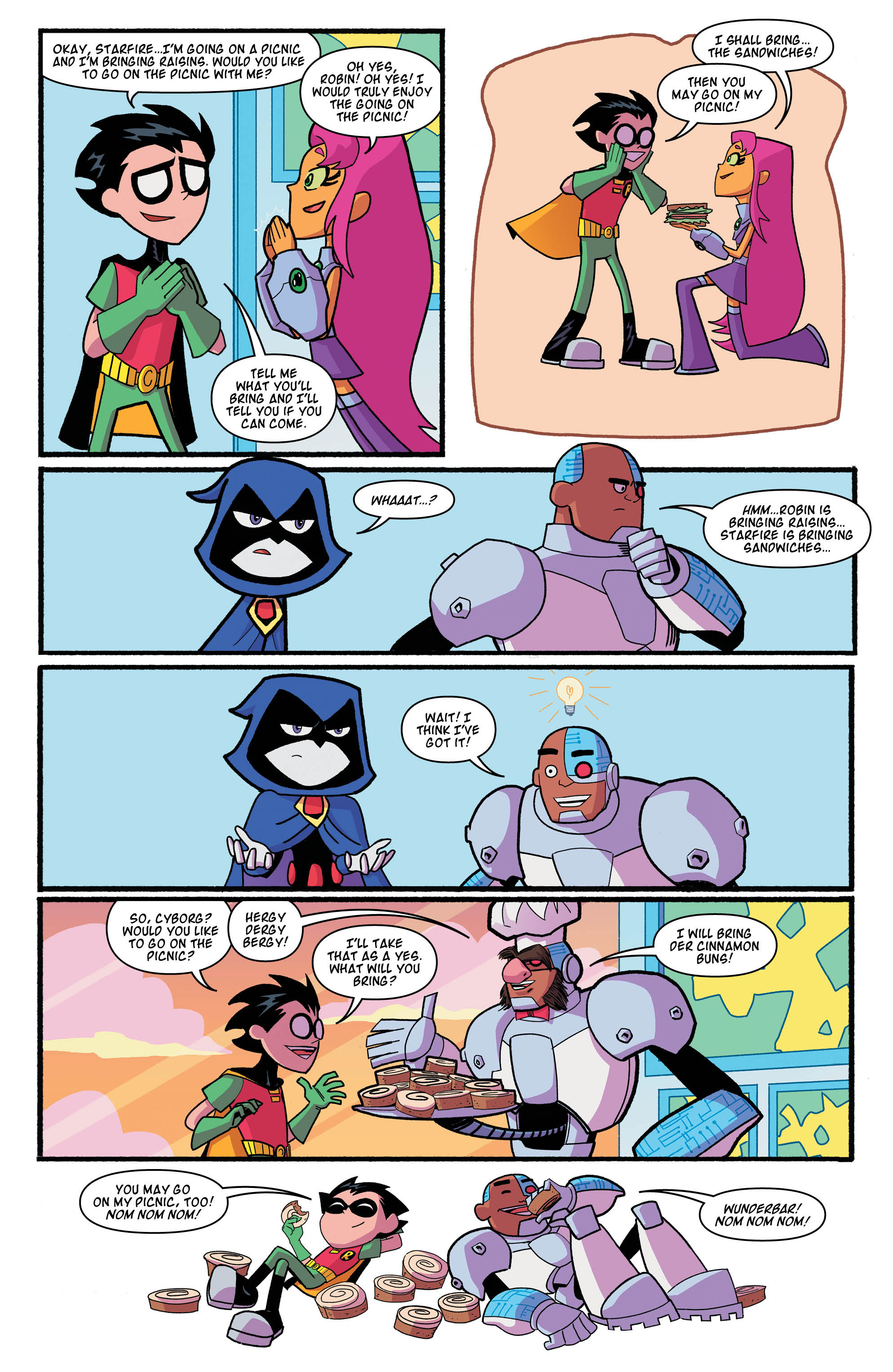