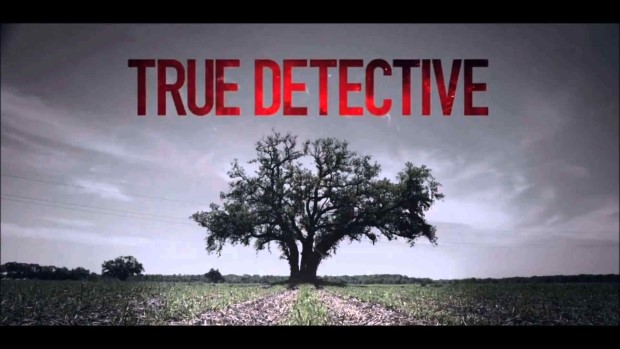 Summary: An esoteric and fascinating journey into the heart of darkness that lies within all men

Time is a Flat Circle

Coming from the mind of Nic Pizzolatto (The Killing), True Detective is a moody and austere southern gothic that details a murder investigation headed by two detectives diametrically opposed in their personalities and methods and is, quite simply, not only the best series I’ve seen this year but is also a strong contender for one of the best programs ever made, in this reviewers opinion. 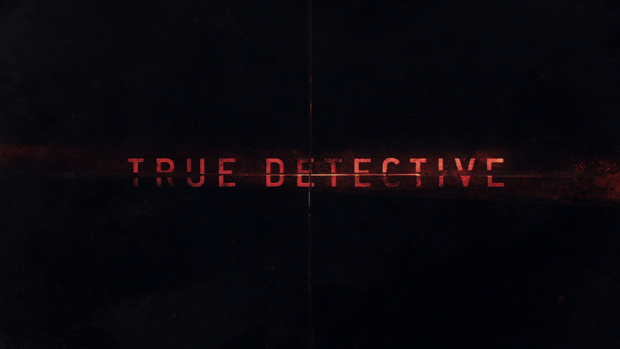 That’s not just hyperbolic rhetoric; the different plot elements of murderous cults, cosmic horror allusions, religious secrecy, familial conflict and much more all come together in a way that rivals the cream of the crop amongst television dramas, presenting an eight episode investigative drama that will creep under your skin and linger in the mind long after the final credits roll.

The story of True Detective takes place across three distinct eras – 1995, 2002 and 2012 – and introduces us to Rustin Cohle (Matthew McConaughey) and Marty Hart (Woody Harrelson), two detectives with very different outlooks on life. 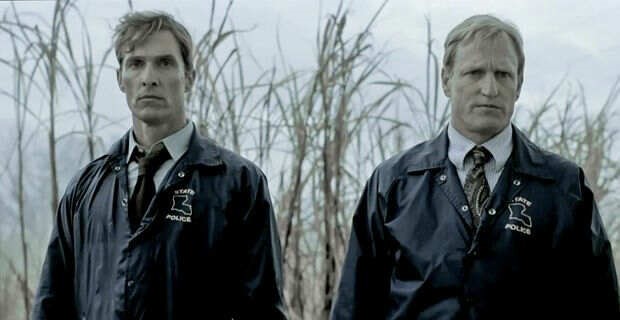 In 1995, Hart has a young family and a doting wife (Michelle Monaghan) but is often too busy embarking on extramarital affairs to truly appreciate what he has; Cohle, on the other hand, is an aloof and brilliant detective who obsessively studies his cases with the ardent fervour of a man possessed, often relying on instinct and psychological profiling to inform his process of deduction rather than adhering to the by-the-book methods favoured by Marty.

The narrative of the series weaves between these different time frames, with a majority of the first half of the series focusing on the 1995 investigation of a ritualistic murder where a naked woman is found naked and bound against a tree with arcane symbols scrawled on her body and a crown of antlers upon her head. 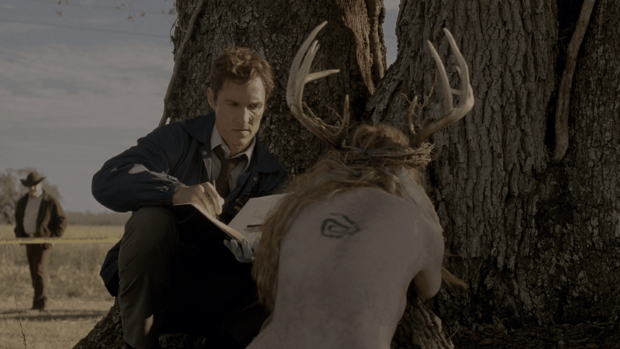 Periodically the series flash forwards to 2012, where the investigation has been seemingly reopened and both Cohle and Hart, neither of them now detectives, are being interviewed at length. The Cohle and Hart shown to us in 2012 are a stark contrast to the characters we follow in 95, particularly Cohle, who now drinks heavily and sports a bitching handlebar moustache and long hair.

As the series progresses we watch the pair following the most insubstantial of leads and struggling to remain amicable in the face of their personality differences, both of them determined to capture The Yellow King who resides in Carcosa, an enigmatic reference to the apparent murderer of the young woman. Along the path of this evolving mystery friendships are formed, relationships are destroyed and the two men stare into the face of the darkest facets of the human soul, neither of them remaining untouched by the darkness that permeates their investigation and their lives. 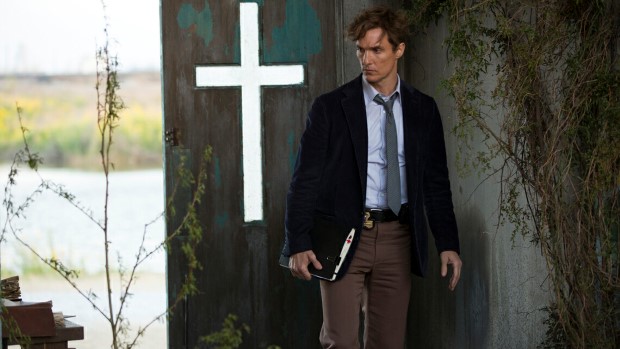 Structurally True Detective is similar to many other procedural programs, but what really sets the series apart is the sombre tone of the writing and the desperate aesthetic of the show’s visual quality; the sweaty, stifling Louisiana locales are shot in a way in which the humidity can almost be felt by the viewer.

Another factor that sets the series apart is its subtle supernatural elements, its Lovecraftian influenced cosmic horror allusions lending the series an escalating sense of dread that becomes almost maddening by the time True Detective reaches its climax. 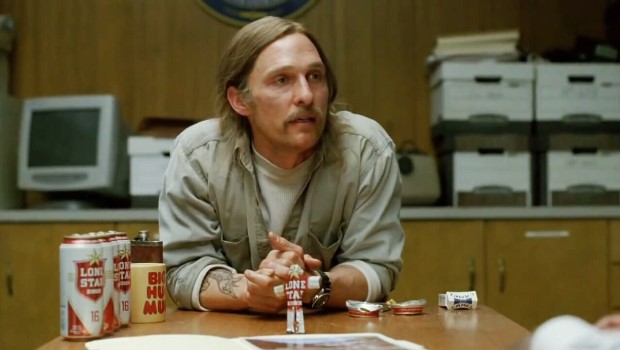 The performances are mesmerising, with the complex Rust Cohle arguably being McConaughey’s finest achievement to date, and the direction is cohesive, with each episode is unified in artistic vision due to having a sole director in Cary Fukunaga.

Not only is the writing absolutely astounding and perfectly honed throughout – Although some may argue that the finale is slightly underwhelming after the intense seven episode build up – But the show also shines in regards to its technical achievements, with an absolutely jaw dropping single take sequence featuring a drug deal gone horribly wrong that rivals anything Alfonso Cuarón so masterfully achieved in Children of Men. 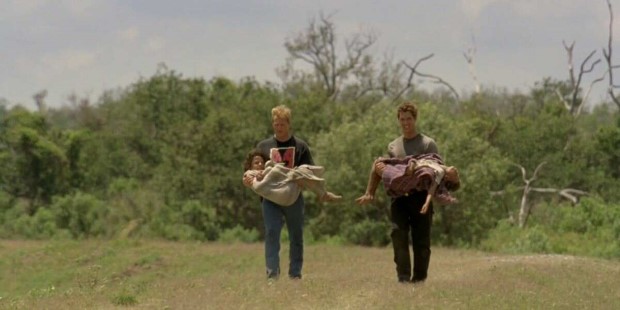 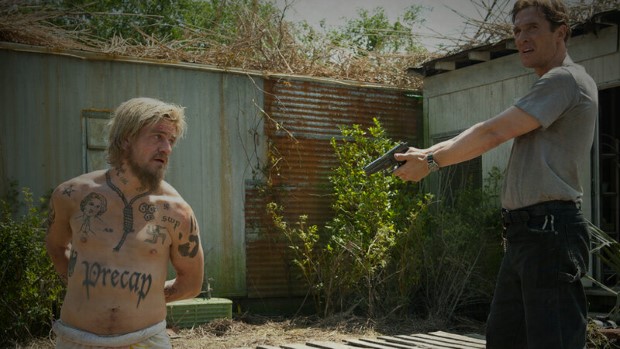 True Detective comes with an absolutely gorgeous 1080p, AVC-Encoded visual transfer that effortlessly handles the myriad of different scene lighting and colour tones of the various locales throughout the series. The image is resplendent in fine detail and boasts heavy and inky black levels, with a fine layer of grain and contrast levels that are comparable to that of a big budget film. Being spread across three discs ensures that there’s very little issues with compression (Aside from some extremely brief moments of false contouring) and I saw no evidence of banding or aliaising. The colour palette is varied and vivid, with the naturalistic tones of the Louisiana locales and the more muted hues complementing the cinematic qualities of the series.

True Detective’s audio is presented via a robust Dolby DTS-HD 5.1 audio track that perfectly captures the moody and oppressive atmosphere of the show with pitch perfect directionality and a dynamic mix that ensures that both the dialogue and the action effects carry sufficient weight.

Boasting an impeccable transfer, True Detective ensures that viewers will have a viewing experience on par with that of a blockbuster movie with this reference quality disc. 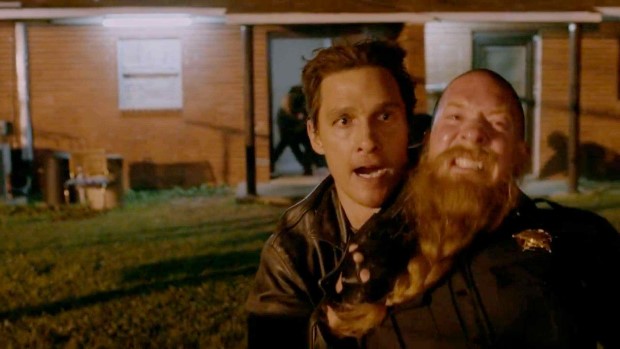 The main draw amongst the supplemental features included on this release would have to be the audio commentaries with creator Nic Pizzolatto and composer T Bone Burnett, although fans may be disappointed that there are only two included; still, across the episodes “Who Goes There” and “The Secret Fate of All Life” they cover quite a bit about the production and writing process in the two hours provided, although there is quite a bit of dead air.

Also included are the short vignettes “Inside the Episode”, which run about five minutes each and offer episode specific insights into the symbolism and creative intentions behind the episode in question, amongst other things, an interview with McConaughey and Harrelson where they discuss the journey of their characters and reflect upon the experience of working together. There’s also a pair of deleted scenes, an engaging conversation with Pizzolatto and Burnett that touches upon some of the same topics raised in the commentary and a making of featurette comprised of on-set footage and interviews where the participants expound upon casting, the setting of the story and take a longer look at the creative and technical process of procuring that awe inspiring single take shot that closes out “Who Goes There”.

Overall, there’s more than enough to keep devotees entertained long after the series proper is completed, yet one can’t help but lament the absence of commentaries on the remaining six episodes. 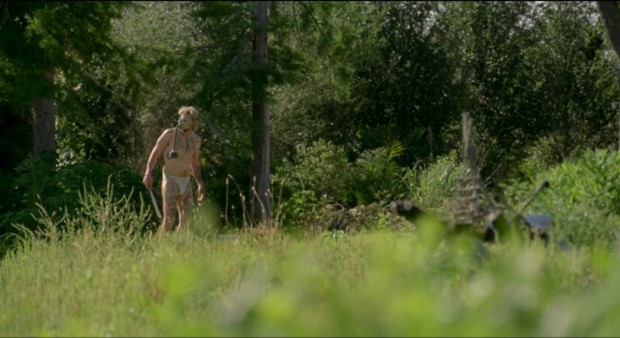 –       Commentary By Nic Pizzolatto, T Bone Burnett and Executive Producer Scott Stephens on “The Secret Life of All Fate” 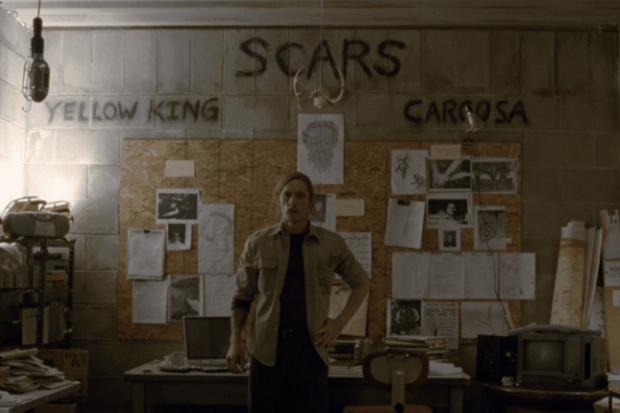 A complex and thought provoking exercise in subverting the procedural investigation format, True Detective is an esoteric and fascinating journey into the heart of darkness that lies within all men. The main mystery that serves as a framework is only a small part of the story, with much of the focus being on the rich interplay between Cohle and Hart as their respective worlds crash together.

There hasn’t been a character on contemporary television that rivals the intricacies of Rustin Cohle, and McConaughey owns the character in a way very few could; the rest of the supporting cast all carry themselves admirably, helped along by and engaging script that ratchets up the tension with each passing minute. The existentialist musing of Cohle offer insight into the mind of a misanthropic genius at odds with the ways of the world and the way everything finally comes together was, for me, very satisfying and a fitting climax to the sheer excellence that came beforehand.

This may all seem like effusive praise, but I personally believe that True Detective is deserving of the critical acclaim and any and all awards that will most assuredly be coming its way. This release has some great supplemental features and is a must buy for fans of thrillers and great television in general. 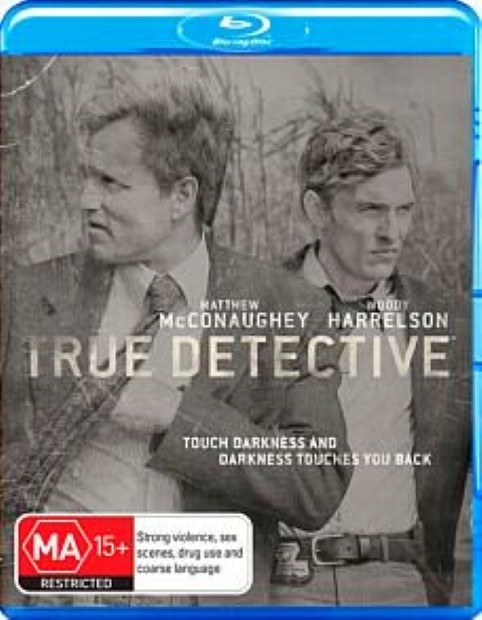