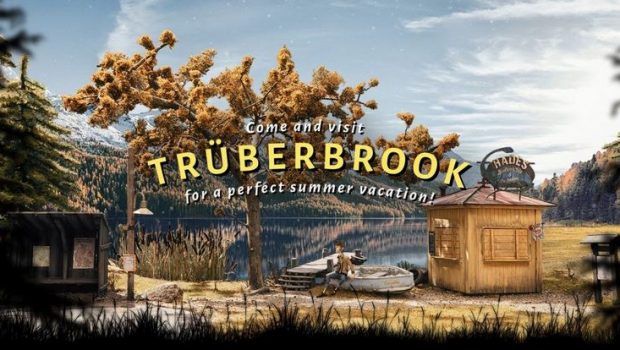 Trüberbrook is a point and click role playing game that spawned from a kickstarter project in November 2017, and after looking through the kickstarter project site, you can get an appreciation for how much attention to detail and hard work went into making it.

It has 3D cartoon characters and foreground scenery with visually stunning background scenery that blends really well to make a picturesque world. Shadows are realistic and seem to match the lighting which also changes according to the point in the story. 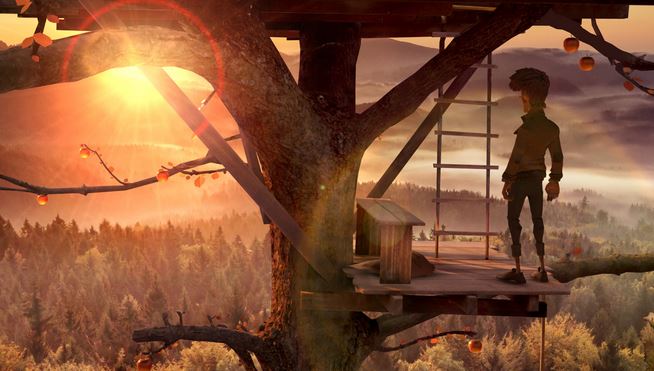 The soundtrack is mood altering and lulls you into emotion of the storyline and yet makes you feel calm and relaxed. You could turn it down but it is immersive and forms part of the storytelling. During a scene inside Trüberbrook you are treated to some original music that you also shape with character input, that’s a really good example of the level of detail and quality the developers put into this game. If you normally disable music in your RPG’s – and I don’t blame you, this one you likely won’t want to. It doesn’t detract, over power any dialog or work against the ambient sounds like many other games do. I get the sense that the music, levelling and volume has all been carefully designed to make the sound part of the story and not simply just ‘filler’, and that’s just great. 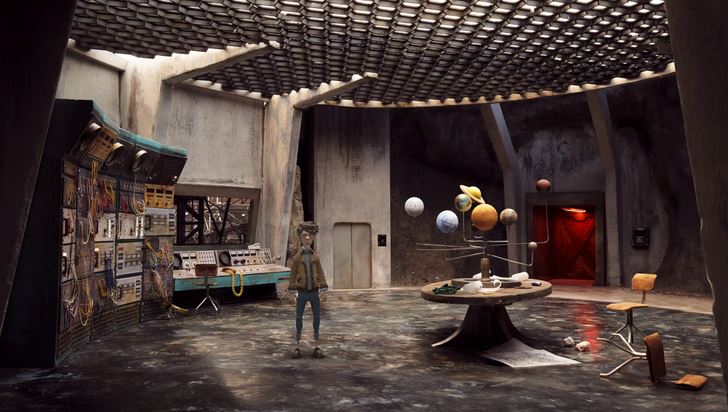 Navigation of your character is extremely simple, easy to use and consistent throughout the entire game. You click on a hotzone and you get a wheel with only 4 wedges. If appropriate it will be active, otherwise it will be inactive. You can look, touch, use with inventory items, and speak to. You won’t get the option if it’s not appropriate or does not have some dialog, for example, let’s say you have a can of tuna in your inventory, it won’t appear as an option unless you could use it with that spot. So elegant.

Walking is simply a click on the ground where you want to walk, double click to walk with a bit of haste. If you change your mind mid-way through, you just click elsewhere. There is also a delightful poof of dust where you click so you have some feedback that your click registered. Transitioning from areas or activating some spots can’t be cancelled, but you can’t make any mistakes, the game just doesn’t let you do that, so it’s all good. You also don’t need to worry about saving and loading from saves. All of that is dispensed with. Just play. 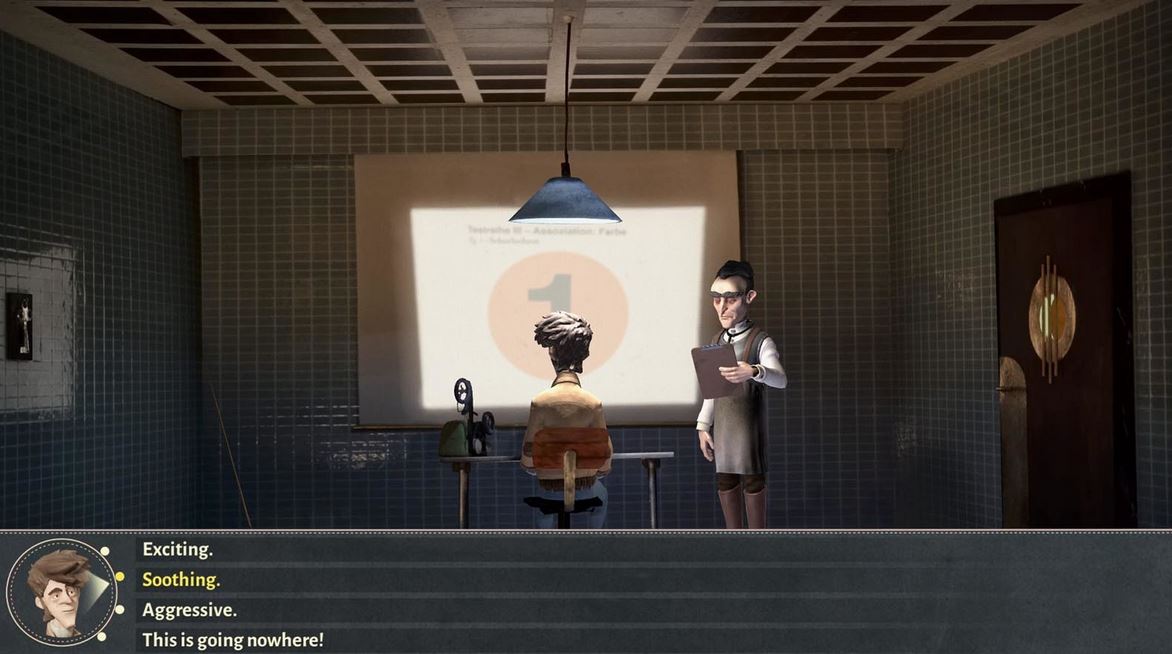 The story captured my interest immediately. You start out with a character with no introduction what so ever and a problem with your motorcycle to solve. The starry night scenery you first see, the lighting, the shadows, is just incredible and beautiful, they did a great job. It is in this first scene where you fumble through a very short learning curve of the controls, and start to form ideas to solve the problem, and once you do you want more!

As you can expect by the name, Trüberbrook has many German references, after all it is set in “Trüberbrook, Germany, 1967”. So you will see a lot of game elements that are in German, such as signage, guest books, etc. You don’t need to understand German to play or enjoy this game, but if you do – even just ein bisschen, then you might get just a little bit extra out of the game.

I won’t expand too much on the plot or characters, because I feel that it would be best enjoyed as I did, as a complete surprise with nothing but the game trailer to whet your appetite. Suffice to say that you are a scientist named Hans Tannhauser, currently writing a thesis and just happen to arrive at Trüberbrook. There are elements and references to science throughout the game, but rather than attempt to be accurate with complex theories and terminologies, the developers chose to poke fun at a lot of scientific terms and make up a lot of medical and physics terminologies which are also informed by English, Latin and German words. The result is a delightful comical twist of crazy terminologies that, even eventually the lay person without any knowledge or understanding would likely conclude that it is just that, funny gibberish. And that’s the point, it’s about telling the story and entertaining you, and that point is driven home at a few key points in a very funny and provocative way. 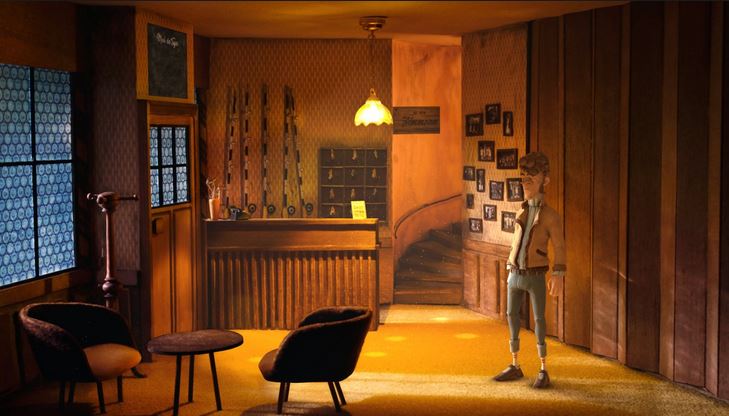 A few times during play, the game breaks the 3rd wall and the character turns just slightly for a moment to look right at you, this is done rather comically and again reinforces that there is still a bit of silliness to the game. For me, I laughed and was taken aback just a bit. Now when you play it, try to be surprised!

If there are any shortcomings with the game, I would suggest that there is a little girl in the game who’s clearly voiced by a child, the quality of her recording seems a bit amateurish but the dialog is actually funny and really only has one or two lines that are bit weak, so you either won’t notice, or won’t care. There are also a few inconsistencies between the subtitles and dialog. Not a problem, and it is usually around the German/English translation which kind of makes the game more immersive, even though you know it’s an oversight. There is however a puzzle towards the end involving some numbers, one of the numbers in an image you are shown does not match the dialogue, instead two numbers are in the wrong order, but the choices you are provided would lead you to conclude only one correct choice anyway, so it isn’t a show stopper. This could possibly be fixed in a game update too.

The other frustration may come when you know what you have to do, you just can’t figure out how to achieve it, or where to click. Turns out I got stuck some ways through the earlier part of the game because I didn’t notice a towel in the hotel room could be collected. Had I of noticed that if you press the spacebar all of the hotzones show an red “x” I would have seen it. You also do need to watch for changes after progression, sometimes things become active when they weren’t, sometimes the interactions can change. 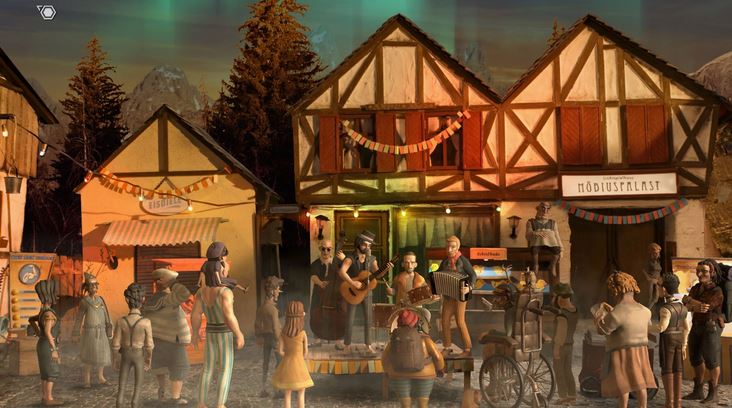 I anticipate many new players will get stuck at the “big round door”, when you get to that door you, you have to crack a code but all you can see is a button next to the door. Pressing spacebar won’t reveal ‘hidden’ items, but along the walls are hidden markings. There are 5 in total and once you find one you will be able to find the rest. I don’t want to provide a walkthrough here, but start with the “Cave Painting” and put them in order. What order? Well I’ll let you figure that out – now you know which came first.

One of the most understated triumphs of this game, aside from the fact that it’s a kickstarter, is that this game is actually suitable for younger kids with parental supervision, and adults. I have not come across any foul language, or overly distasteful scenes, although there is something you find in your hotel room, it’s not called what it actually is, but it is what it is, and YOU know what that is, and your kids probably won’t know what that is so it’s okay! The conversations you have with Trüde about it, and her facial reaction, well you just have to play it for this alone. Seriously. No joke. 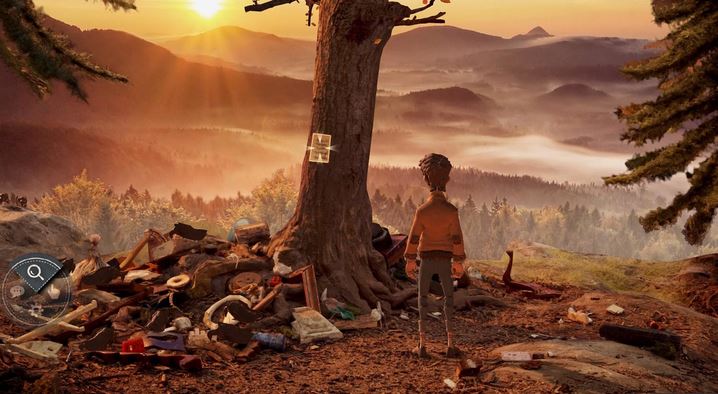 However there is actually a dedicated kids mode, so for due diligence I checked this out. I played it again through to the first part of chapter one, but I could not identify what if any changes to the game this made, even for the aforementioned hotel-room item. I would suggest this game is perfectly fine for 13 and up, but also with supervision, likely suitable for the 8-12 years old as well.

If you enjoyed the Kings Quest games and similar titles, you will enjoy Trüberbrook. Hands down, this is a surprising slam dunk. It’s a great story, with twists, humour, problem solving, adventure and mystery. There is also a choice you make at the end, which I suspect provides two endings, so it’s likely to warrant a second play through for this, but you would want to wait a bit between, to appreciate it again.