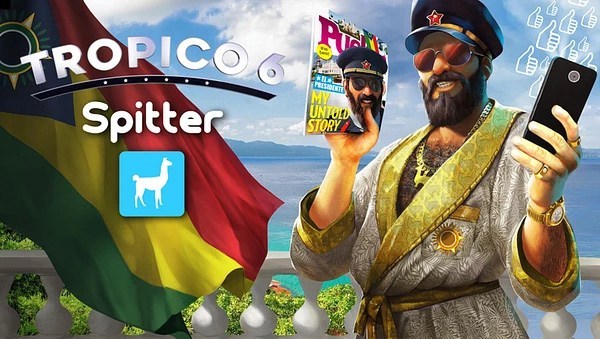 It’s time for more Tropico love with the new DLC called “Spitter”. If you have not played Tropico before, or not familiar with previous review on the main game, then familiarise yourself here

This DLC adds a few new maps, new buildings including the Rehab Center, Beauty Farm & Super Villa and a new social media element to the game during the modern times era, and you may not have to think too hard to think about what Spitter is parodying.

Once installed, Penultimo will introduce you to your new Spitter account and a phone will be displayed on the top right, constantly notifying you of new Spits. These Spits will of course come from your factions, each making their political contribution to Spitter and expecting you to ‘like’ their Spit. 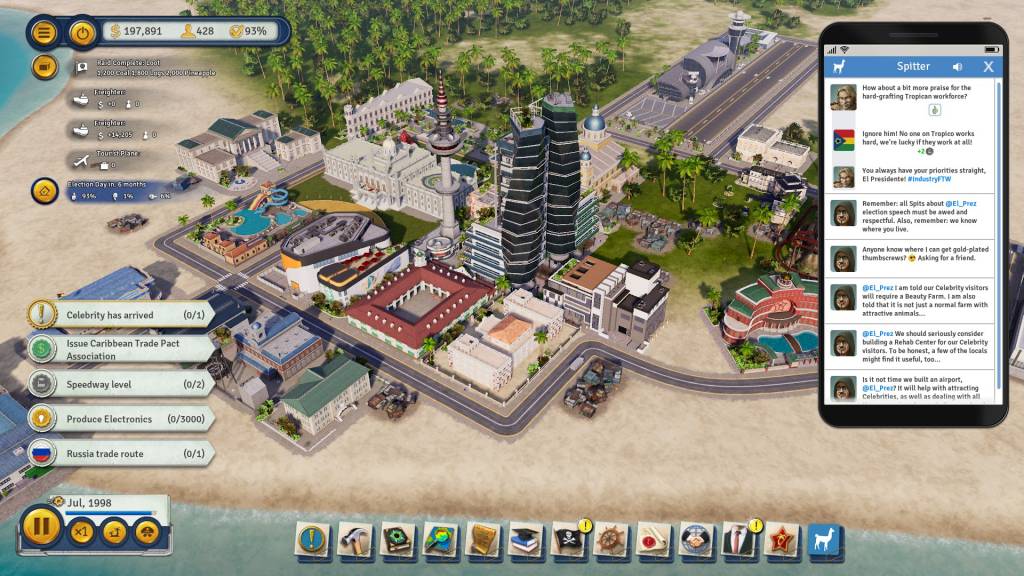 Additionally, the DLC introduces celebrities whereby when they visit your beloved Tropico, they will post a comment, which by liking it will increase tourism and the celebrities standing with Tropico, but will instantly piss off one of your factions and lower your standing with them.

Each action you take such as building a new building, changing the constitution or edicts, or alliance changes typically generates a Spit from one or more faction members, as will liking or disliking one of those Spits from the opposing faction(s).

The Spitter functionality simply put, adds the ability to have an additional modifier change to factions after all the previous standard modifiers have been accounted for during that action. The consequence is that you are able to have a second chance to positively or negatively affect the factions standing with El Presidente by liking or disliking the relevant Spit.

The game also forces a response from the player, by simply ignoring a Spit, the modifier may become negative for both factions or be repeated (endlessly and annoyingly). The modifier value is also seemingly disproportionate in some cases, at times being upwards of +/- 10-15 points.

In terms of actual game play, taking into consideration the existing systems in place, an edict for example could invoke a -5 negative standing with one faction and +10 with another, but the negative aspect could be smoothed out somewhat by sacrificing more standing with the positive influenced faction by liking the opposing faction Spit, resulting in a negative reaction from the original positive faction; With us so far? Great. Unfortunately, the Spits are the Spits are the Spits. They come when they come and so the modifier options and the points are not easily predictable, nor are they arbitrary; In fact it really does depend upon the decisions, the current modifiers, edicts and all kinds of things.

As for the Spits themselves, well a few of them are well written and comical, but once you have read them all in the first 1-2 hours of game play, unfortunately you will be sick of the well-worn phrases and it will simply blend into the background with all the other going’s on.

The best part about the Spits is the ability to smooth out positive and negative influence that you can gain after irritating one of your factions in order to boost your low standing with them, the worst part about it is the fact that it is there, constantly going off and constantly distracting you from the rest of the game. It can also easily get out of hand and drive one of the factions to below the safe level, or even to 0, so it is another area where skill must be divided, and for the exact same outcome anyway.

As far as maps go, they are just maps. They are like the existing maps, but a different layout. There does not seem to be anything new or amazing about them. The Rehab Center, Beauty Farm & Super Villa are decent enough buildings, and are useful as far as increasing the tourism within Tropico. The Super Villa is actually the fancy mansion where a named celebrity tourist can be offered citizenship and live in the Villa. Once they are a citizen they can be given a job which has a special bonus which offers great perks.

The best and most useful part about the Spitter DLC is the introduction of the celebrities and Super Villa with the job perks.

Unfortunately the ever present bugs and annoyances of the main game still remain, underpinning a mostly lacklustre experience with this new DLC. Although it does add a new level of complexity, in-game-realistic-annoyance, it really does feel more like an attempt to make the game more relevant in a playful tongue in cheek kind of way.

The problem with this is that it’s the same old same old. There are already positive/negative consequences for creating new buildings, or for changing edicts etc. It’s just more of the same, adding to the pool of modifiers just to make the game more challenging (cumbersome) and repetitive, especially at fast game speeds.

This DLC should have been, and would have been far better as part of the standard game, but it ultimately is a mediocre experience at best; it’s very distracting and at times incredibly frustrating, especially when you get ‘spammed’ by the exact same message 10+ times in a row from the same faction leader, each with a like/dislike ability regardless if answered. It is this reviewer’s preference that the bugs and undesirable behaviours in the main game be addressed as a preference to new DLC’s being released..

Summary: Fun for an hour or so, then exceedingly annoying.

Not worth Spitting about