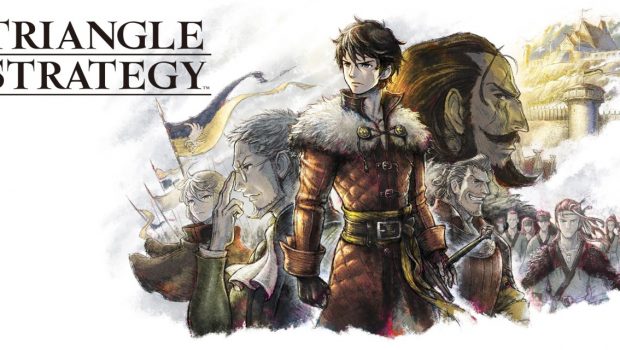 Triangle Strategy takes a long time to open up. The first five hours are the weightiest introduction of a Tomoya Asano-produced title to date, making Bravely Default and Octopath Traveler feel lightweight in comparison. But, underneath its text-heavy and occasionally bloated storyline, Triangle Strategy is a bold adventure worth exploring, complemented by a combat system tweaked to perfection.

And while those opening hours are hard work, they’re necessary to set up the politically-challenged continent of Norzelia and the war that threatens it. Set in a time where allegiances rest on a knife-edge, you take up the role of Serenoa, heir to the throne of Glenbrook, as he and his allies try to broker peace amongst Norzelia’s three nations. Through lengthy conversations, Triangle Strategy manages to fully explore every aspect of Norzelia’s challenges. Although the focus throughout the campaign has its sights set firmly on Serenoa and his allies, there’s plenty of opportunity to see the world through the eyes of others, with plenty of cutscenes and the odd side mission or two focusing on the Norzelia’s other major players.

It makes the world of Triangle Strategy both engaging and grounded, with the whole package feeling like a mature take on the RPG genre. Yes, there’s plenty of magic and the occasional weirdo sidekick, but for the most part, it’s a game more akin to the political, backstabbing worlds of Dune and Game of Thrones, rather than Triangle Strategy’s gaming contemporaries like Final Fantasy. 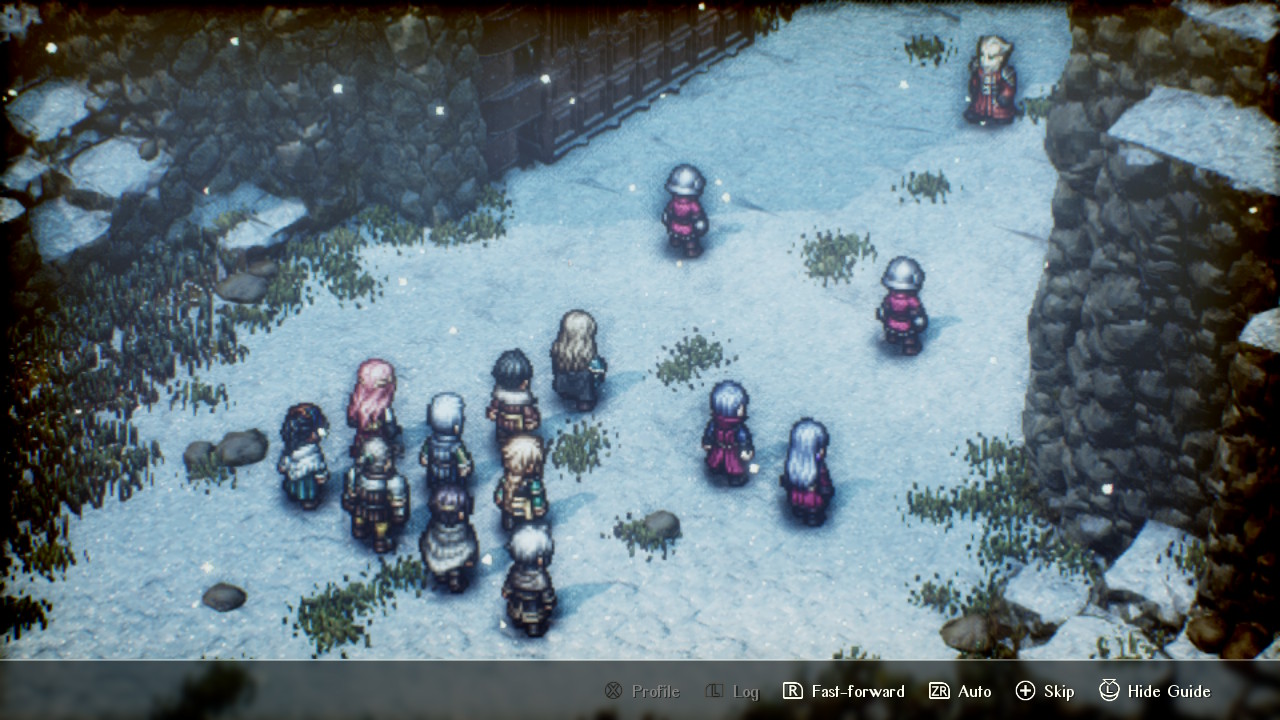 Triangle Strategy also feels more involved, putting players and their choices at the centre of the game’s expansive adventure. Through a system called Serenoa’s Conviction, players need to convince NPC’s to bend to Serenoa’s will, with the help of three convictions known as Utility, Morality and Liberty. The more Serenoa talks to NPCs, the better he can sway the residents of Norzelia to his side.

It’s a system that goes hand in hand with Triangle Strategy’s story, turning information-gathering into an art-form and creating a detective out of Serenoa. Many early decisions feel trivial, but as chapters progress, the stakes become much higher, with the fate of Norzelia very much in your hands. By the final half of the game, you’re forced to make decisions that can completely sway where your adventure goes – as well as who will join you on the way. 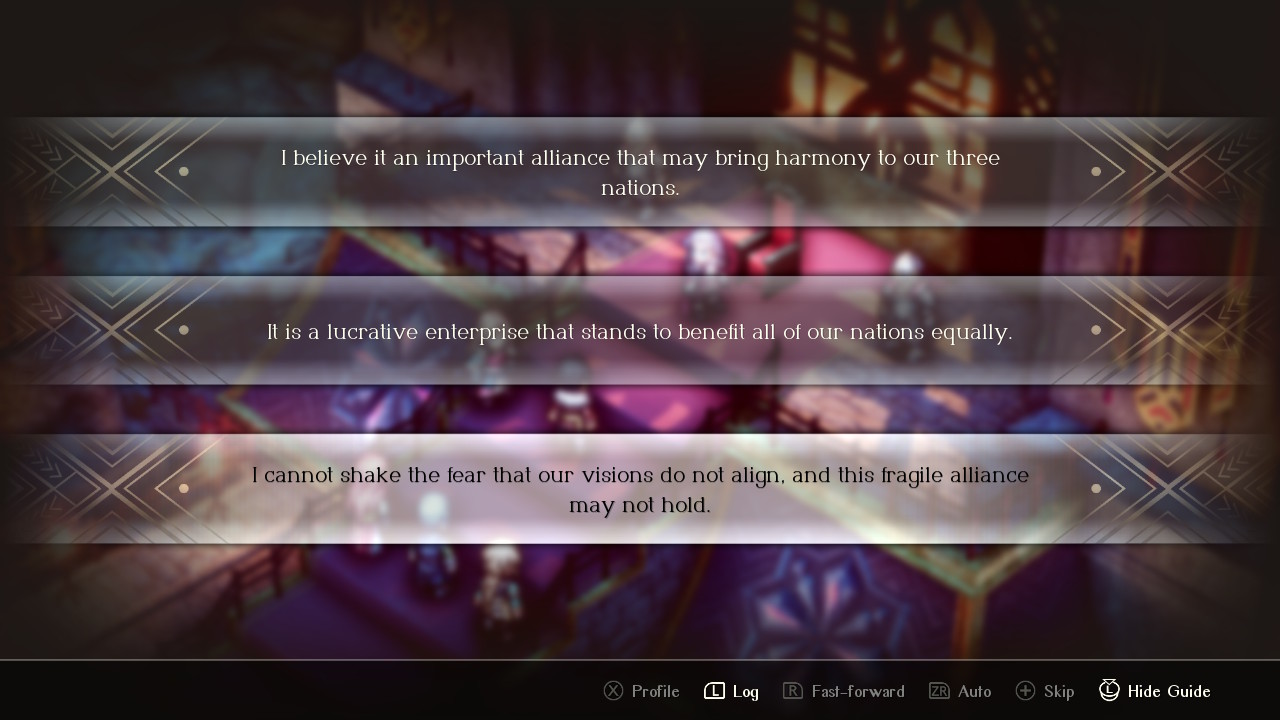 Making these decisions requires plenty of exploring, taking Serenoa through a myriad of environments, like the industrial streets of Aesfrost and the sandy dunes of Hyzante. It’s a lush world, combining sumptuous HD-2D models with 3D environments to create gorgeous cityscapes and towns that are a delight to explore. A quick wiggle of the right joystick and the map is given the 360-degree treatment, giving the player a chance to enjoy the world of Norzelia in diorama-esc glory. It’s instantly reminiscent of games that got me into the genre, pulling me back to the days of gaming greats like Chrono Trigger and the 2D Final Fantasy titles. It’s the gorgeous pixilated characters popping off the screen, the snow gently falling across the tiny towns of Aesfrost – it’s difficult not to love how gorgeous Triangle Strategy is.

These environments come alive the most during combat, and, while the game’s intense narrative adventure won’t be for everyone, the battle system will certainly tick most boxes for turn-based aficionados. Channelling the likes of Final Fantasy Tactics and Fire Emblem, battling in Triangle Strategy is both engaging and painfully difficult, with Serenoa, his allies – and their enemies – taking it in turns to dish out damage through grid-based battles. It’s immediately engaging and thoroughly intimidating, with enemies usually much stronger than each of your characters. 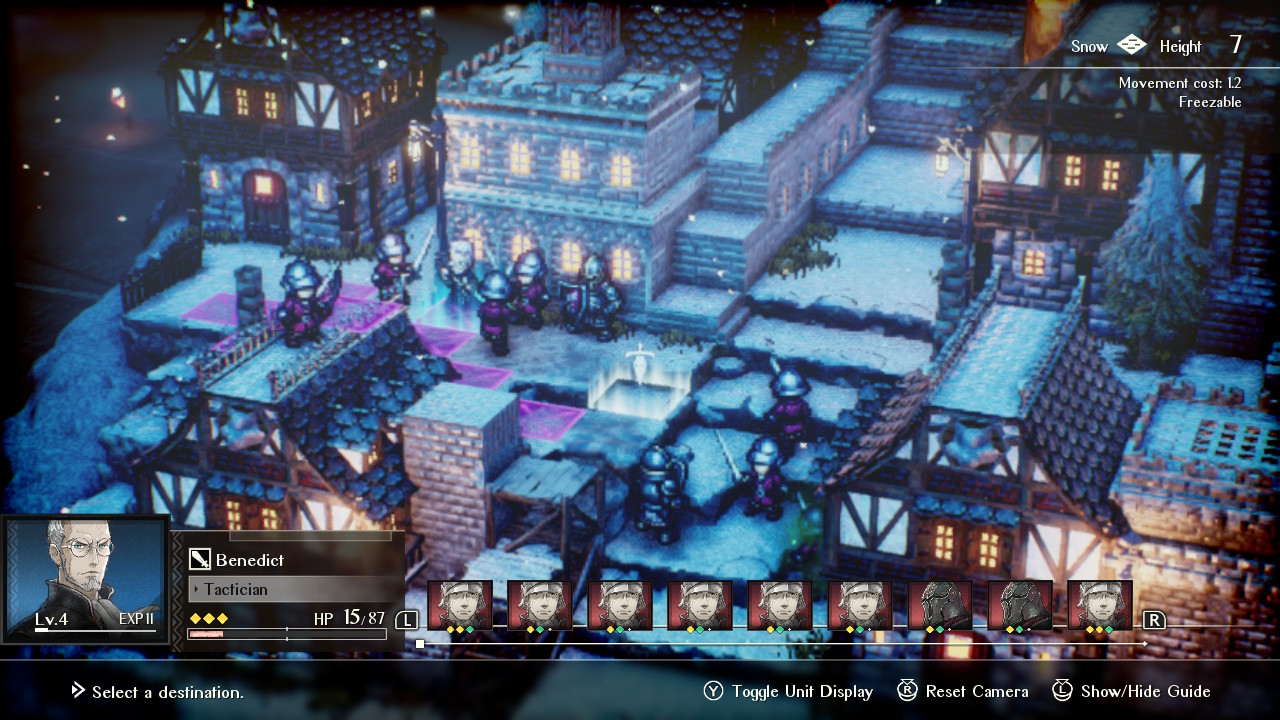 Luckily, Serenoa and his allies have plenty of bite of their own, each boasting unique traits, moves and classes to give them the upper hand in combat. Getting the balance right before each battle is imperative – have a squad of solely combat-based warriors and you’ll find yourself quickly outsmarted, but bring along a mage and a long-ranged warrior and your chances of victory are much higher.

It helps that heroes feel unique and fresh. 20 hours in, my roster had expanded immensely, with a plethora of weird and wonderful fighters joining my team, from barrel-shaped robots to martial arts OAPs. Some have strengths in fighting, whereas others are excellent healers or buffers – each character has its own merits, and it makes creating a squad that works for you a genuine treat. It also helps that these character’s are well fleshed out, with each having their own reasons to join Serenoa’s cause. 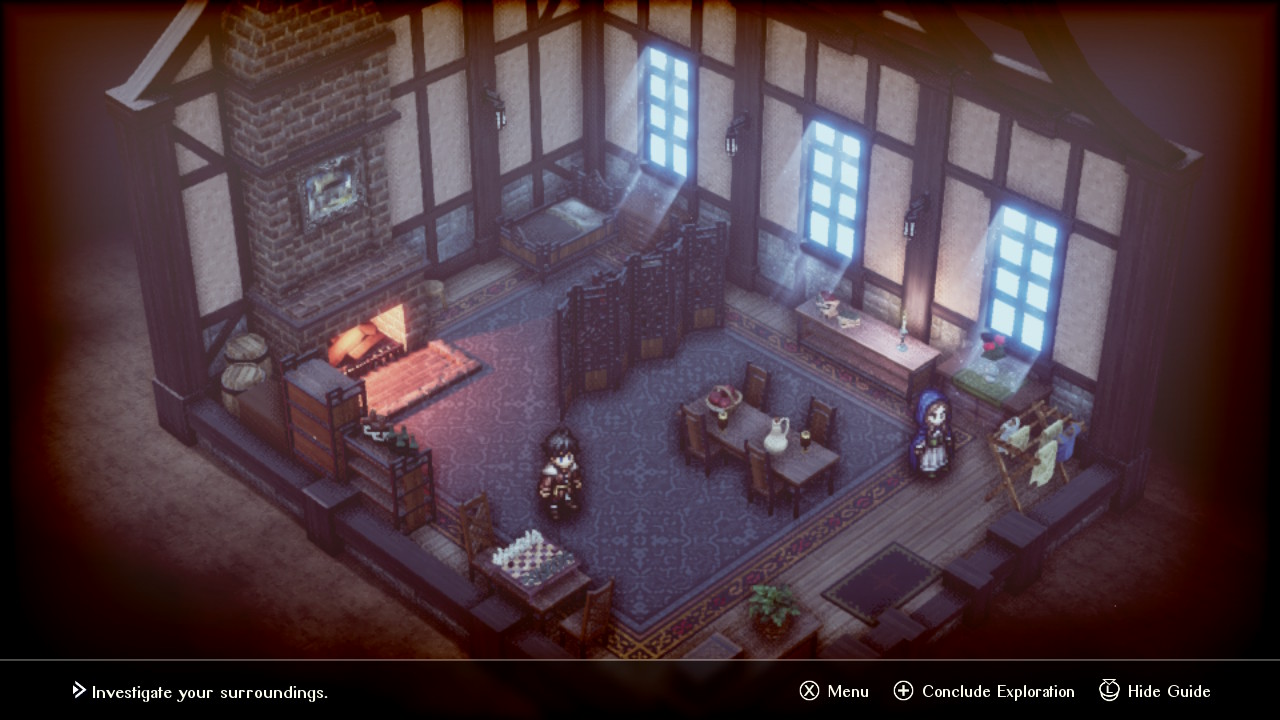 But the difficulty curve is steep. Battles often see Serenoa and co. surrounded by enemies from the off, sometimes taking two or three turns before you get to counter attack, but through clever tactics, the player can easily come out on top – as long as they play smart. Flanking and terrain play a huge part in Triangle Strategy, and understanding these techniques can often make the difference between victory and defeat. Surround an enemy and successfully launch an attack and your ally opposite will also hit with a follow-up move. It’s a system that comes in useful, especially when fighting bosses, as these extra moves can help chip away at enemies with particularly bulky life pools. Likewise, as seen in many similar titles, terrain is an important factor. While the usual things to take into consideration are featured – having a height advantage usually means you deal more damage, for example – the game does have a few unique terrain-based elements up its sleeve, like electrocuting water to turn the ground into a deadly trap, forcing your enemies to reassess their path to your heroes.

It turns Triangle Strategy into a deadly game of chess, where each move is imperative to making it out alive. Players get plenty of chance to plan before battle, allowing you to adjust your squad in an encampment, but game’s can quickly turn sour. It’s a balancing act, and one you need to keep your eye on to ensure it goes your way, especially in the latter half of the game where mission objectives are more elaborate, allowing for more things to go the enemies way.

But Triangle Strategy just feels so clean and polished. It doesn’t overwhelm with character skill trees or weapon options, instead it keeps things simple, levelling up mid-battle and limiting new weapons to only a handful for each character. You can buy items and upgrade your troops, but it never feels like it steps too far off Triangle Strategy’s mission to deliver a focused RPG adventure. It makes the whole thing feel much more fluid – it’s aware of its beefy narrative moments, and it doesn’t keep you hanging around when you finally get to battling. These battles are, however, massive, sometimes lasting nearly an hour. This, in theory, is fine, but with the game being so tough on occasion, you can find yourself deep into a 45-minute fight only to make a decision that sends you right back to the start. 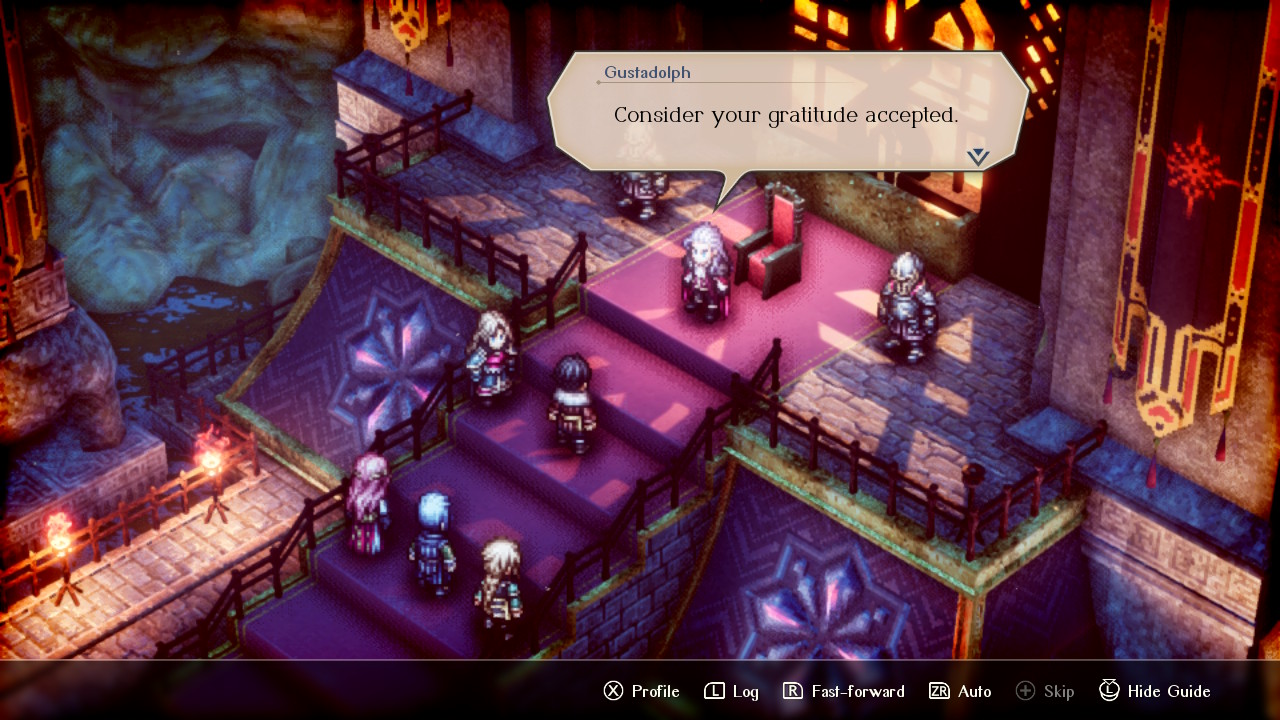 And the game isnt without its issues, but they’re few and far between. Triangle Strategy runs perfectly both docked and in handheld mode, with barely a stutter noticed in my 50-hour playthrough. I did have an issue with the game’s often forced dialogue, though, especially as the game is voice-acted – it just feels a little cheesy at times, and it takes away from the game’s otherwise serious adventure. All in all, Triangle Strategy delivers on what it sets out to do, with very little detriment along the way.

Triangle Strategy is unique in its sprawling story, and its success is only solidified by an excellent combat system that makes battles as intense as they are intimidating. With deep lore and an overall mature approach to a genre too often dumbed down, Triangle Strategy is an RPG fans dream.