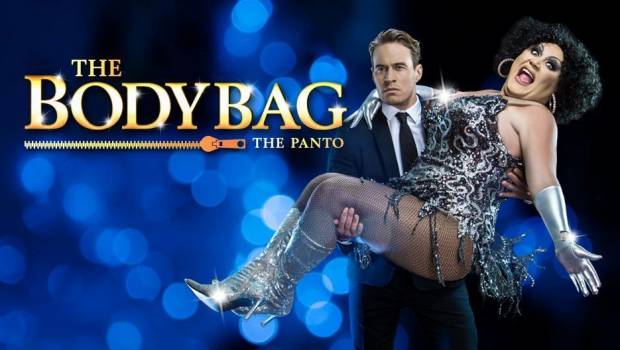 “Ashley applies his fearless humour to everything from Tony Abbott to local TV stars…There are plenty of laughs, ranging from very silly sight gags to up-to-the-second political material… The Bodybag is definitely the funniest!” – TimeOut ****

“THE BODYBAG THE PANTO is a must see.  With Ashley and Scott’s fabulous wit and creativity, this is a brilliantly inventive piece of entertainment for musical theatre fans, social aware audiences and those that don’t mind a bit of smut.” –  Broadway World

Multi-award-winning superstar Rachel Marinade (Trevor Ashley) is one of the most successful entertainers ever to have come runner-up on Australian Idol*.  But after a spate of creepy “fan mail” it’s clear that Rachel needs protection.  Not only that, after being charged in local court for holding a fake driver’s license, she also needs transport.

Enter ex-ASIO officer, and current Uber driver Tank Charmer (Gus Murray).  It’s not only his job to protect her – but to get her to her destination with 5 stars.  Who knew they could fall in lust?

With a cast of complicated characters including a bitchy sister (Markesha McCoy), an ab-riddled backup dancer (Heath Keating) and Rachel’s ambitious ten-year-old daughter (Nicholas Craddock), you will hear all the songs you know, like you’ve never heard, or wanted to hear them before.  Expect a plethora of 90’s divas coming down from a coke-fueled bender.

From the creators of FAT SWAN and Little Orphan TrAshley, no one is safe in this wicked and ridiculous send-up.  Not even remotely based on an Oscar-winning movie, this genre defying hilarious romantic-musical-thriller will have you sending more horrific hate mail than Barnaby Joyce got from his ex-wife.

*this show has nothing to do with nor is endorsed by Australian Idol.