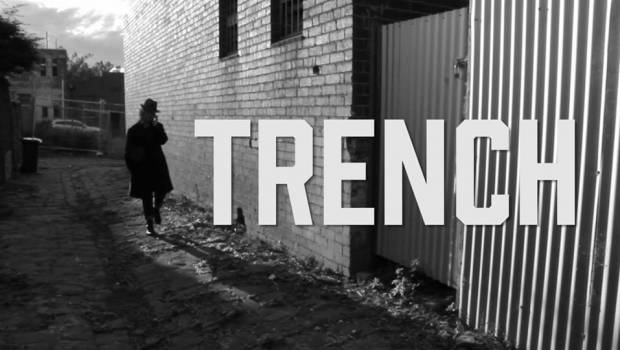 Summary: Trench makes for a funny, left of field movie with a distaff theme that hopefully gets support from local film lovers.

Movies with tiny budgets often make use of their financial shortcomings through clever dialogue and interesting character development and for the most part that’s what comedy neo-noir indie film Trench has achieved. Set in modern day Melbourne, Trench takes us down a mashed-up path of the past and present with the film being shot in stylish black and white while protagonists use smart photos and Skype to navigate this jazz filled world of mystery. Sam Slade (Samantha Hill) is a stand-up comedian who can’t manage to keep a roof over her head while shut-away writer Becky Holt (Perri Cummings) can’t manage to step foot out of her flat. The two characters are worlds apart until Sam makes a desperate attempt of becoming a private investigator to help Becky with a stalker situation. Somebody has been breaking into her apartment and leaving cryptic notes that quote literary heroes. Is this a simple prank or could things turn dangerous? Sam is not much of a comedian but she does somehow possess the deduction skills of a modern day Sherlock Holmes. Her problem is that she’s good at seeing what others don’t but can’t manage to slip away unnoticed. This juxtaposition between being suave and goofy is where a lot of the comedy comes from.

What Sam Slade lacks in sophistication she makes up with dedication. She sees Becky’s situation as an oppressive move against women since Becky writes about pro-women issues. Her list of suspects who may be harassing the recluse writer boils down to three people. There’s the incel-esque leader of weird and not so wonderful men J.B. Symons (Simon Godfrey) who believes women have the sole purpose of being won over by dudes with a slick pick up line. Add in a Jim Jeffreys type of crude comedian Jimmy Kay (Robert Davis) and conservative politician Tabitha Stark (Cate Wolfe) and you’ve got a ripe set of suspects for Sam to pick away at. Watching Sam deduct theories about who she’s interrogating is fun and endearing. Layers of each potential offender are peeled away as she interviews the shady characters one after the other. Paul Anthony Nelson, who directed and co-wrote this fun little film with Perri Cummings, make a great film making team, as it’s quite easy to get sucked into this modern day mystery. There are of course elements of comedy in a film about a stand-up who tries to make a few bucks from being a P.I. but the whodunit of the story outweighs the laughs.

The strongest performance from the cast is most definitely Scott Major who plays Becky’s loyal friend and love interest Tom who would go above and beyond to protect Becky. Coming in a close second as one of the more intriguing presence on screen goes to Becky’s upstairs campy neighbour Simon (David Lamb) who’s just a big ol’ bag of fun to watch as he jumps about the screen. Though the movie is a lean fun ride there are some lulls. Without giving the ending away we’ll just have to say that once the stalker is revealed their motives are a real head scratcher that don’t exactly line up. But maybe that’s the point, that there isn’t any logic to somebody who’s crazy enough to harass a reclusive writer. Other confusing moments are filled with some Melbourne in-jokes (“I’ll be home faster than you can say Monash Freeway”) but that can be forgiven. Trench makes for a funny, left of field movie with a distaff theme that hopefully gets support from local film lovers.