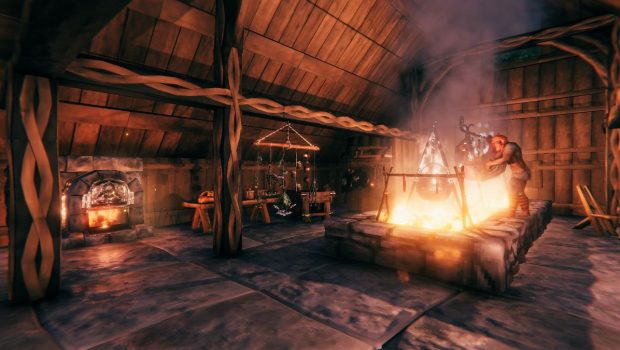 SKÖVDE, Sweden – August 25th, 2021: Coffee Stain Publishing and Iron Gate Studio are delighted to announce that Hearth & Home, Valheim’s first major update, will launch on September 16th with a feast of new features, by the will of the Allfather. Revealed with an animated trailer that aired during Gamescom Opening Night Live, the critically-acclaimed open-world co-op survival game will be getting its first major update to bring a hoard of new content to the Norse afterlife.

The new trailer follows the solitary journey of a bold viking who has single-handedly slain the mighty Moder and now journeys back home. Upon his arrival, a lush feast awaits in the grand hall, giving fans a cinematic taste of one of the themes in the new Hearth & Home update: food! While players will have to wait until September 16th to find and experience all the new content first-hand, Valheim’s first major update focuses on enhancing the core base building and survival mechanics. Hearth & Home aims to give vikings even more tools to create the longhouse of their dreams and cook up a feast fit for an Aesir.

Several features introduced in Hearth & Home have already been revealed by the development team on Steam and social media, including brand-new cooking extensions to introduce spice racks, butcher tables and pots and pans. The new tools complement the reworked food system that has not only introduced new recipes, but now gives players more interesting choices with an improved health and stamina system.

The improved food system will have a significant impact on the core combat experience for players, allowing them to finely balance their Viking diet to suit their playstyle, while further changes to shields and blocking mechanics will give players even more epic battles for Bragi’s skalds to sing about.

A treasure trove of new build pieces will also be added, including a literal treasure chest for Vikings to store their hard-earned gold – treasure inside a chest made out of treasure, by the Gods! Brand new window hatches and darkwood materials have also been previously revealed.

Launched into Steam Early Access in February of this year, Valheim has been an instant hit as players swarmed to settle the afterlife and battle the greatest creatures of Norse mythology together. A game initially developed by just five people, Valheim sold over seven million copies in under two months and hit a peak of over 500,000 concurrent players, making it just the fifth game to do so in Steam history.

“One of the most exciting things we saw when we first opened the gates of Valheim was the incredible creativity of the community and we immediately wanted to give players even more power to express themselves and create the homestead of their dreams,” said Henrik Törnqvist, co-founder of Iron Gate Studio. “Though it’s coming a little later than expected, the player base has been fantastic – understanding that we wanted to get Hearth & Home spot on – and in turn we’ve listened to our amazing community to keep building Valheim with them.”

Albert Säfström, CEO of Coffee Stain Publishing added: “As the first major update it was always important that Hearth & Home enhances the core gameplay that made fans fall in love with Valheim in the first place, all while adding new content and mechanics that give the game even more depth.

“While there’s plenty more to come from Valheim, it’s the first step into realising the full potential of this game through Early Access, and we’re so excited to see players experience it all when the update launches.”

Valheim is available for AU$28.95 on Steam Early Access for PC and Linux, check it out now!