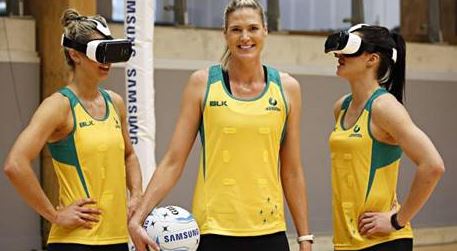 The Train like a Diamond VR experience was unveiled at the Future Diamonds Studio at the Constellation Cup (Sunday, October 9). The 360-degree training session brings Netball fans closer to the game through Samsung’s innovative technology that enables an up close and personal experience thanks to VR.

The Train like a Diamond initiative is part of Samsung’s Rethink Role Models campaign which was launched in May this year.

Philip Newton, Corporate Vice President & CMO, Samsung said, “Fans of netball will now get to experience how our best female athletes train. We are thrilled to work with the players on offering a first of its kind to the sport, connecting fans with their role models.”

“The game of netball is so fast-paced, dynamic and exciting. We’re thrilled to work with Samsung and their innovative technology to give fans behind the scenes access to what our training sessions are like,” Ms. Layton said.

The content gives the viewer behind the scenes access to a training session and immerses them amongst the team and challenges them to keep up. It enables the viewer to take their time and look at every player around them moving at a fraction of their normal speed.

The content can be viewed on Samsung Galaxy smartphones that are compatible with Samsung Gear VR and can also be accessed via YouTube:

The Train like a Diamond VR experience will feature at the Future Diamonds Studio, and be available to the public, at the: