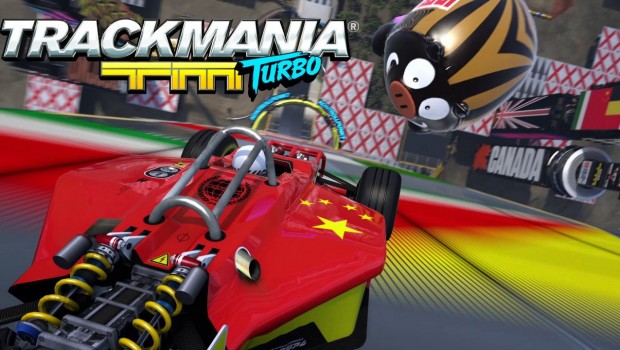 Summary: Trackmania Turbo combines the thrill of arcade racing with the addictive short-form challenges of games like Trials.

It might sound like a bit of a paradox, but Trackmania Turbo is a racing game that you can enjoy even if you don’t really like racing games. The hook for Trackmania Turbo is that it’s incredibly easy to pick up but challenging to master, easily accessible for newcomers but with enough rage inducing moments to satiate the desires of more experienced racers. 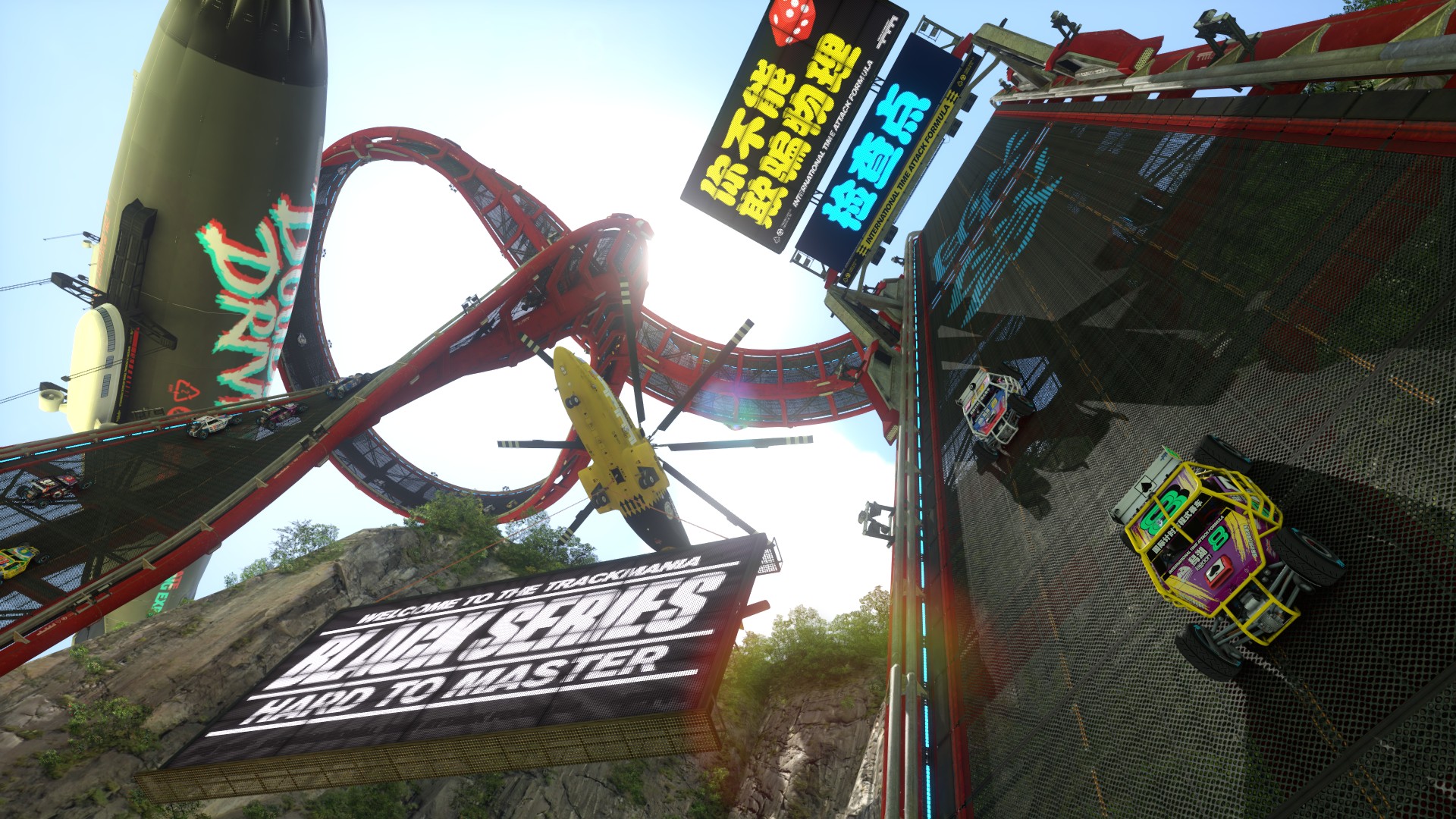 When embarking on the main campaign, players will have four environments to play through for every bracket, each incrementally increasing in difficulty; each area plays uniquely due to the vehicles you use for each one as well as the design of the tracks themselves.

For example, Rollercoaster Lagoon is exactly as you’d expect, a series of tracks that switch from third to first person view when you reach the rollercoaster sections and has a vehicle that is perfectly suited to the challenges offered up by the area. Other times you’ll be zooming around Grand Canyon Drift, which usually comes with a vehicle with top control and speed, when you’ll suddenly leave the tarmac and go off-road, having to adjust your driving style to accommodate it; the once easily navigated courses are now a nightmare of twitch reactions where the smallest mistake can cost you the medal, simply because of a slight change in environment. 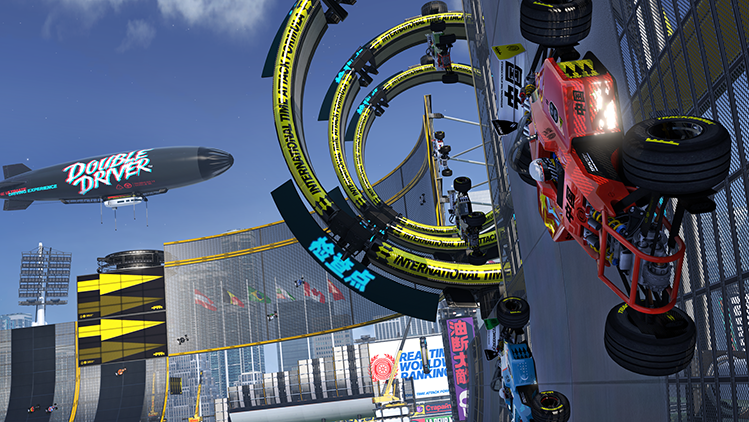 With 200 tracks on offer, there is a fair amount of variety here and most new players will find the learning curve relatively gentle for the first 80 or so of these, as most of them are explicitly designed to ease you into the driving mechanics. The final 120 will test your mettle, however, and the sudden difficulty spike might be enough to deter some players from continuing, which would be a shame.

Your goal in Trackmania Turbo is to achieve a fast enough track time to qualify for either a Bronze, Silver or Gold Medal across a series of short burst challenges that generally run for a minute or two, with the exception of the three lap race of a composite of the previous tracks that players undertake every fifth run. The tracks can vary between a simple straight run with a hairpin turn at the end to a complex series of jumps requiring precision aiming before being whisked along a series of rollercoaster tracks at breakneck speed. 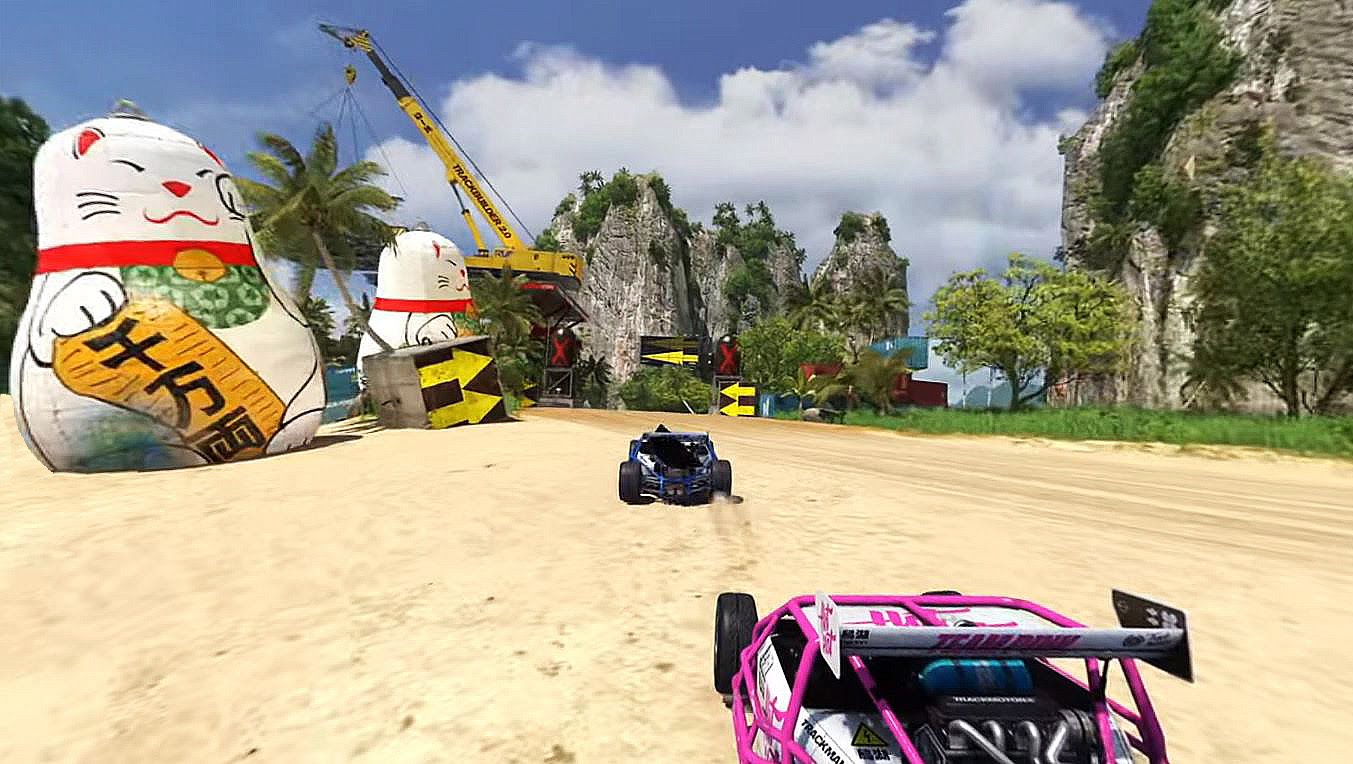 The first two brackets are fairly easy to get through as they only require a Bronze medal but the latter two will test your patience due to players having to get all silvers for the third and the final 40 tracks demanding nothing less than a gold medal performance for each track in order for you to progress.

This seemingly insurmountable task is made  more manageable, however, by the Joker system, which allows players to trade up their medals for a better one, such as achieving three bronze finishes and swapping them out for a Silver medal. This allows struggling players to experience the latter stages of the game without being penalised for not pulling off a perfect run. 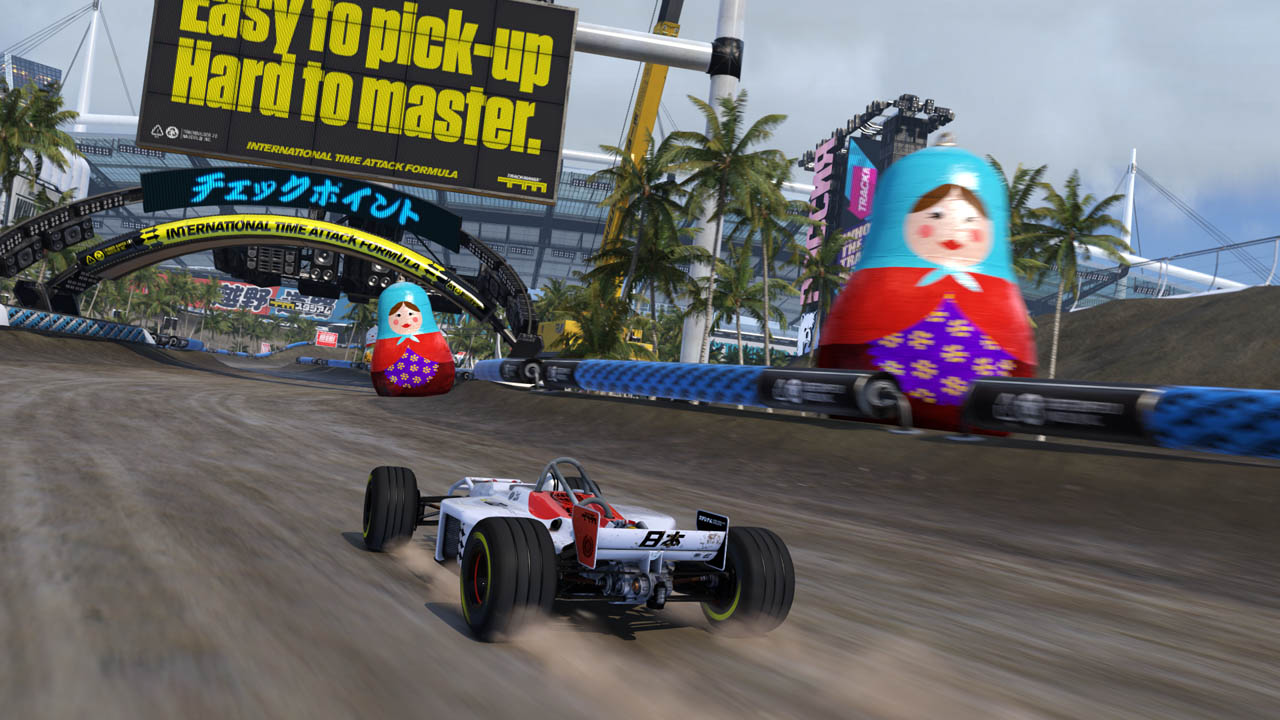 Trackmania Turbo has a myriad of multiplayer options, both on and offline. You can race head to head in split screen mode, take on over a hundred players at once in achieving the best time attack score, use two controllers to pilot the same vehicle and much, much more.

These additional modes offer up a nice break from the occasionally infuriating campaign and are a nice way to blow off steam until you feel ready to tackle the harder stages. 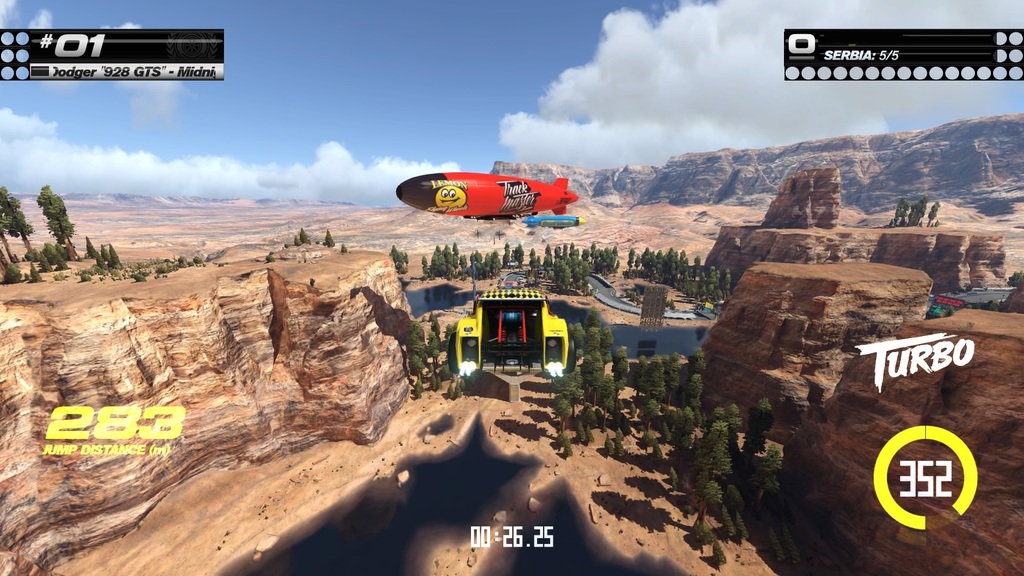 There’s also a track editor for the more creatively minded, offering up as complex a process as you’d like – You can rely upon the designer to generate track elements for you or you can take control over every tiny detail and tweak your design to your heart’s content.

There’s a lot to explore here and the community will no doubt have some truly spectacular efforts up for other players to participate in in the coming weeks, but, personally, I don’t really have the patience to delve into designer modes beyond having a cursory look, so I didn’t really get to explore this mode. 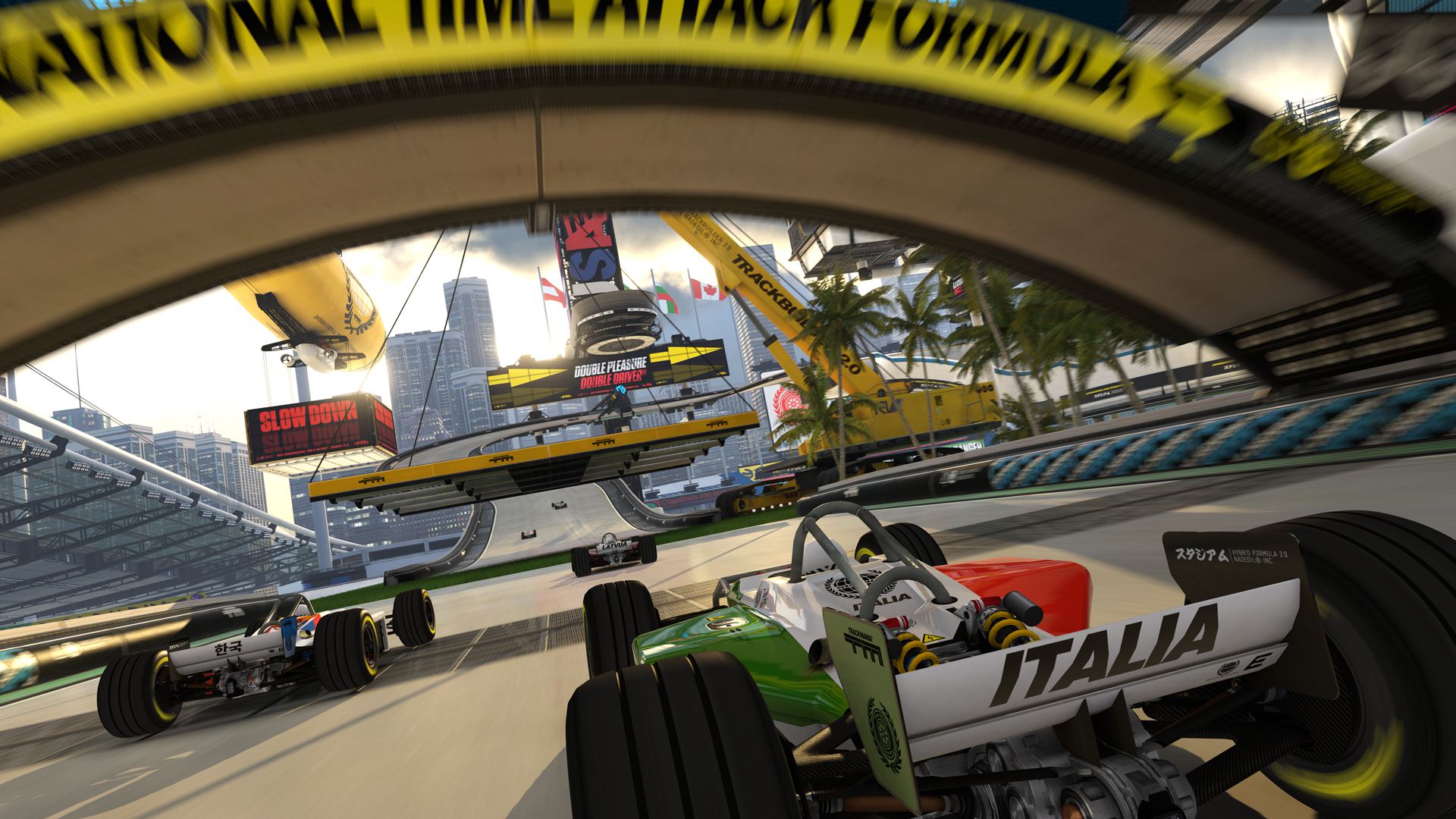 Trackmania Turbo is a cheerfully bright game, with a cartoonish, arcade aesthetic to it. For me, it conjured up fond memories of playing the old Daytona USA racing cabinets that were so prevalent back in the day. The frame rate remained constant throughout and I experienced no graphical glitches or any real bugs throughout my 16 or so hours with the game. The audio is solid, if unremarkable, with appropriately gutsy engine noises and wince inducing crashes.

The soundtrack can be a little hit and miss – It’s composed of jaunty, electronic tunes so your mileage may vary depending on what kind of music you dig; even with my general dislike of electronic music there were a few tunes that squirmed their way into my brain like a symbiotic parasite and remained there for the following few days, so chances are there will be a track or two that will appeal – Or at least grow on – most players. 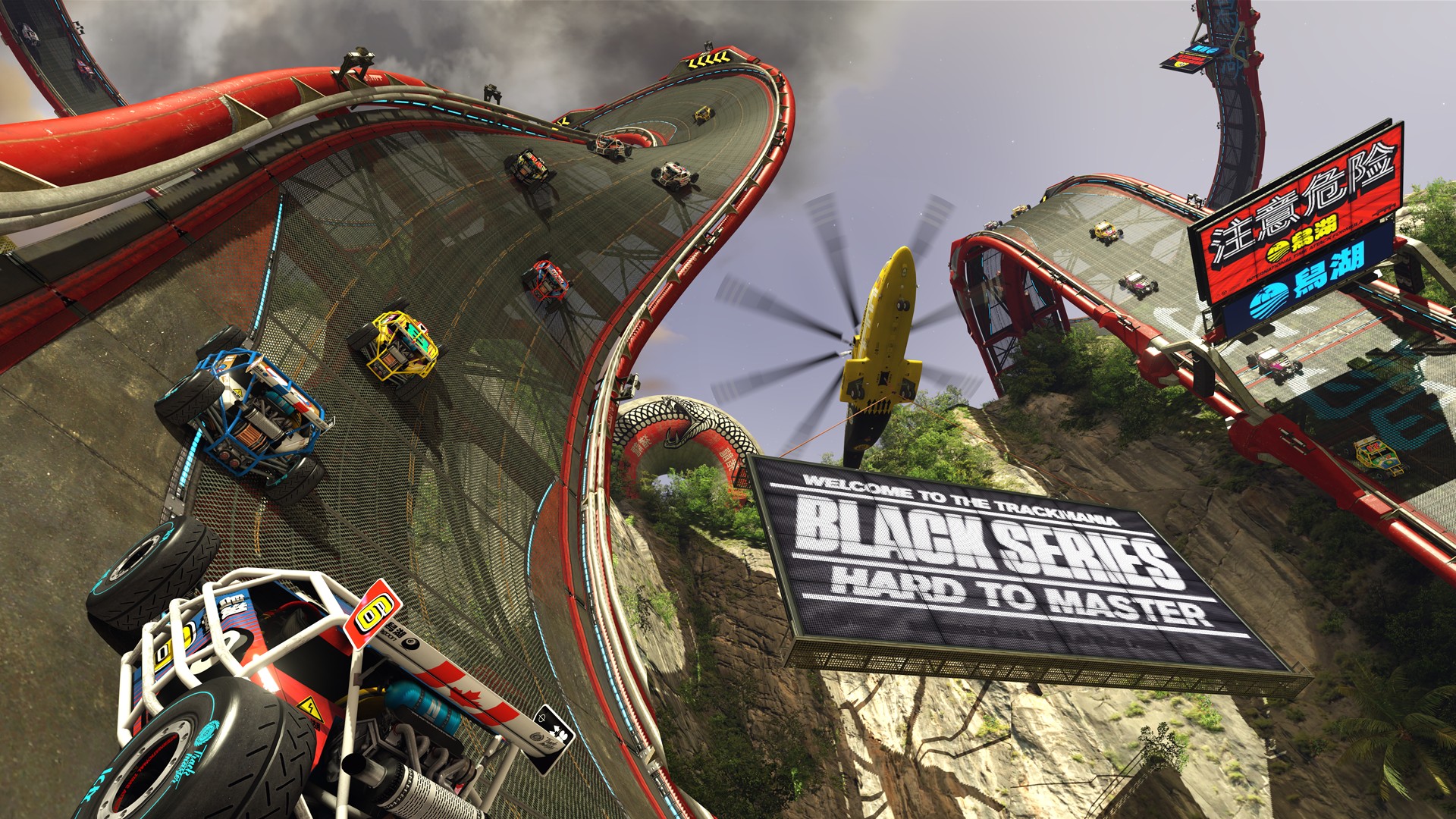 Trackmania Turbo combines the thrill of arcade racing with the addictive short-form challenges of games like Trials. The track design is exemplary, if seemingly intentionally designed to elicit the maximum possible amount of frustration from players, and the pick-up-and-play nature of the game makes the barrier for entry incredibly easy.

In fact, despite none of us really being big fans of the racing genre (And my partner pretty much loathing any game that isn’t Lumines or Bart’s Nightmare for the SNES), my entire family got hooked on Trackmania Turbo, jostling each other out of the way in order to try and best the previous time.

This, to me, is Trackmania Turbo’s biggest success – Its ability to appeal to absolutely anyone.

Addictive, fast paced and absolutely chaotic at times, Trackmania Turbo is that rare beast indeed – A racing game that will appeal to mostly everyone without compromising one iota of what made the previously PC exclusive series such a big hit. 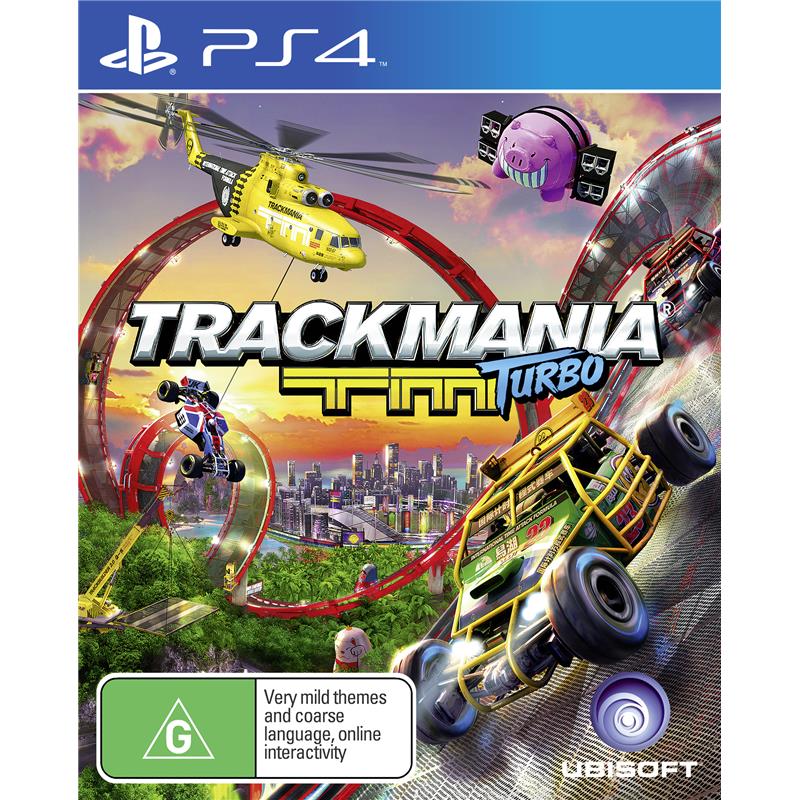