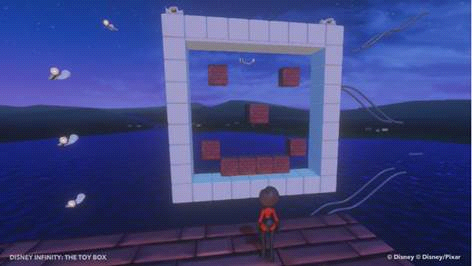 This week, Disney Interactive is releasing the winners of the Disney Infinity “Toy Box Contraption Challenge” for best use of Logic and Creativi-Toys. Players were tasked to create crazy, unique and exciting contraptions that perform simple tasks. The top global Toy Box of the week is “ Buttons!“ – a world filled with booby traps and adventures. Players will be challenged with buttons at every turn and must be strategic with every step. Timing is everything!

This week we are also releasing a bonus Toy Box world created by Andrew Reiner from Game Informer Magazine. Make sure to explore his Toy Box creation as well.

Check out the latest episode of the new web series, “The Disney Infinity Top 5 Toy Box Countdown,” for a look at the winning submissions: http://youtu.be/nsche_h6KD4

Included in the video are details of the next Toy Box challenge: DuckTales. And as a special extra, the team at Avalanche have re-created Duckberg!

BONUS TOY BOX: Reinerland: Created by Andrew Reiner, Executive Editor at Game Informer Magazine, Reinerland is a crazy world with a crazy jump. See for yourself!