Summary: Toruk: The First Flight (Cirque du Soleil) is not your traditional performance but one that is still thoroughly satisfying and very story driven

Toruk: The First Flight is a prequel to the James Cameron 2009 blockbuster Avatar that is helmed by the famous Montreal Cirque du Soleil troupe. It is set three years before the film and revolves around three Na’vi teenagers who are attempting to tame Toruk, a dragon-like creature in order to save the Tree of Souls and the destruction of their planet. 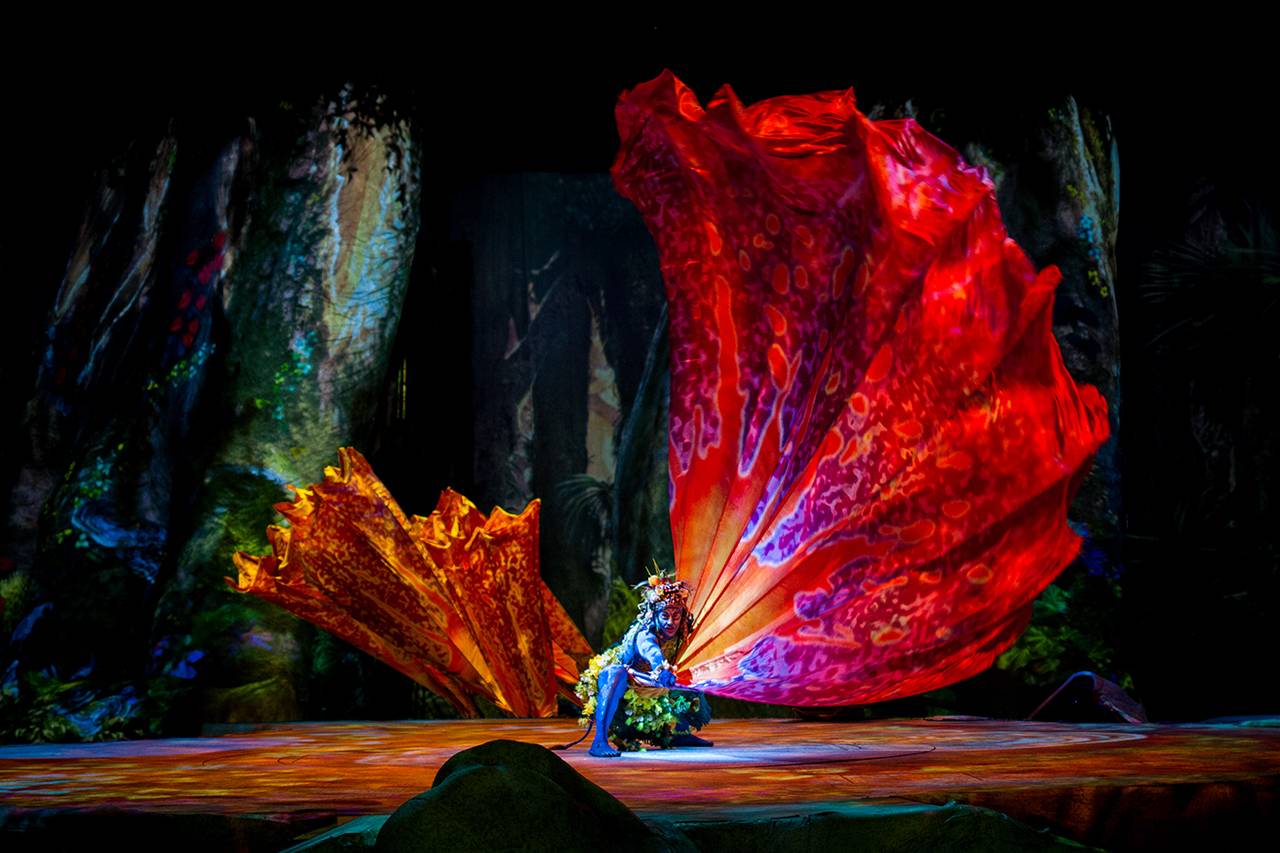 This includes two brothers of love not blood from one Na’vi tribe and a strong headed Chieftain’s daughter who embark on a journey across the planet Pandora in this coming of age story as they hope to gather the five artifacts of prophecy needed to tame this savage beast. To help with the immersion factor, the production is spoken (and sung?) in Na’vi, however the performance is narrated in English by one of these blue skinned aliens which happens to be an older version of one of the brothers.

Like other Cirque du Soleil performances, Toruk: The First Flight is a visual extravaganza, however this creation is filled with some truly astonishing puppetry that helps bring the planet of Pandora to life from savage six legged dogs and even a giant turtle within the confines of Rod Laver Arena right here in Melbourne. With all these elements, the story of these three Na’vi is like a documentary with its diverse landscapes, strange tribes and astonishing wildlife. 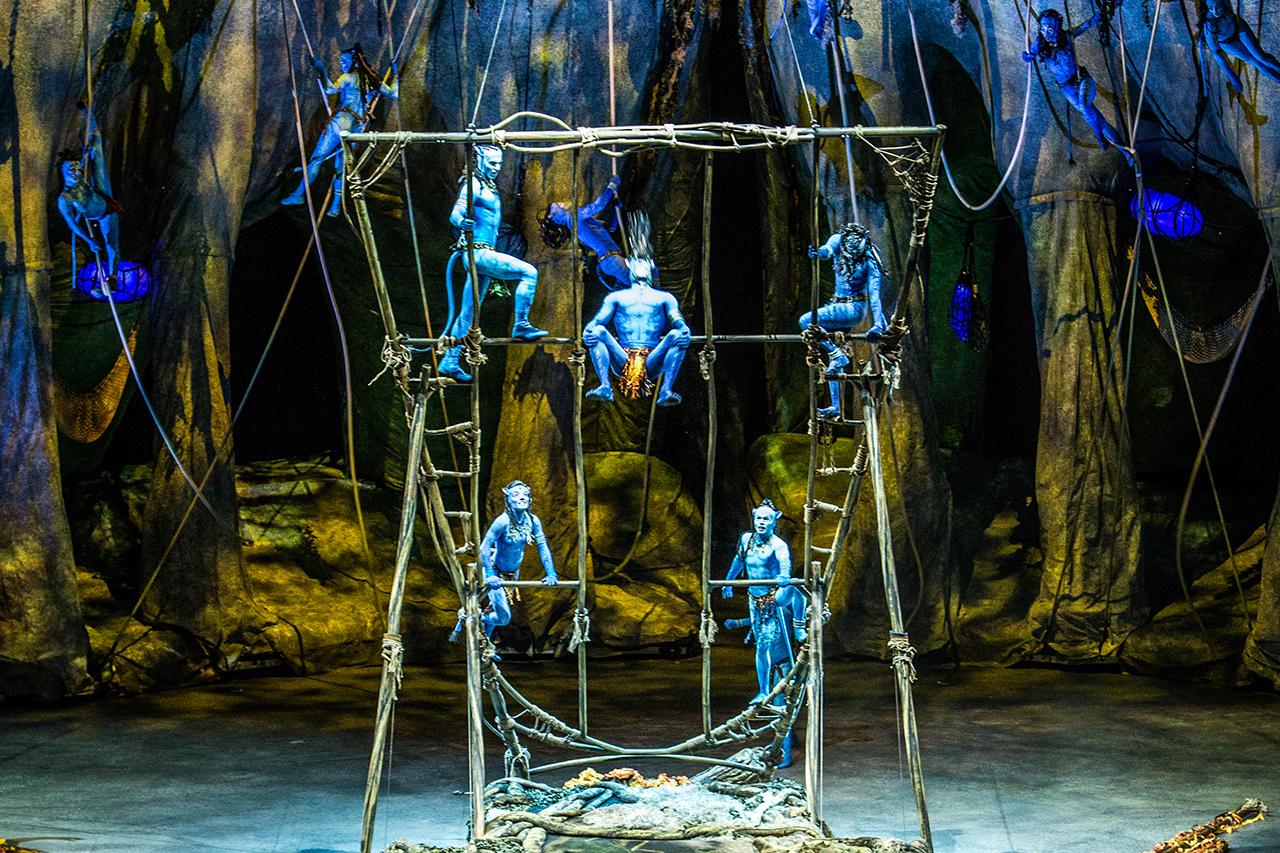 At its core, Toruk: The First Flight channels this almost Jim Hansen-like production with the clever puppetry used in this performance that becomes amalgamated with the very talented circus performers such as the super human acrobats who literally fly around the stage with some Parkour elements thrown into the mix. Add in contortionists and other circus peripheral like silks and Toruk: The First Flight definitely amazed the audience.

The narrative behind the story works well and there’s even an interactive app available for your smartphone which is a little gimmicky and does detract from the illusion at times when people have their phones facing the wrong way. Nonetheless, there’s plenty of standout moments and my top three included the scene with the giant skeleton that was like a balancing game, the Na’vi warrior flying Toruk and the kaleidoscope of lights at the end with the tree of souls. 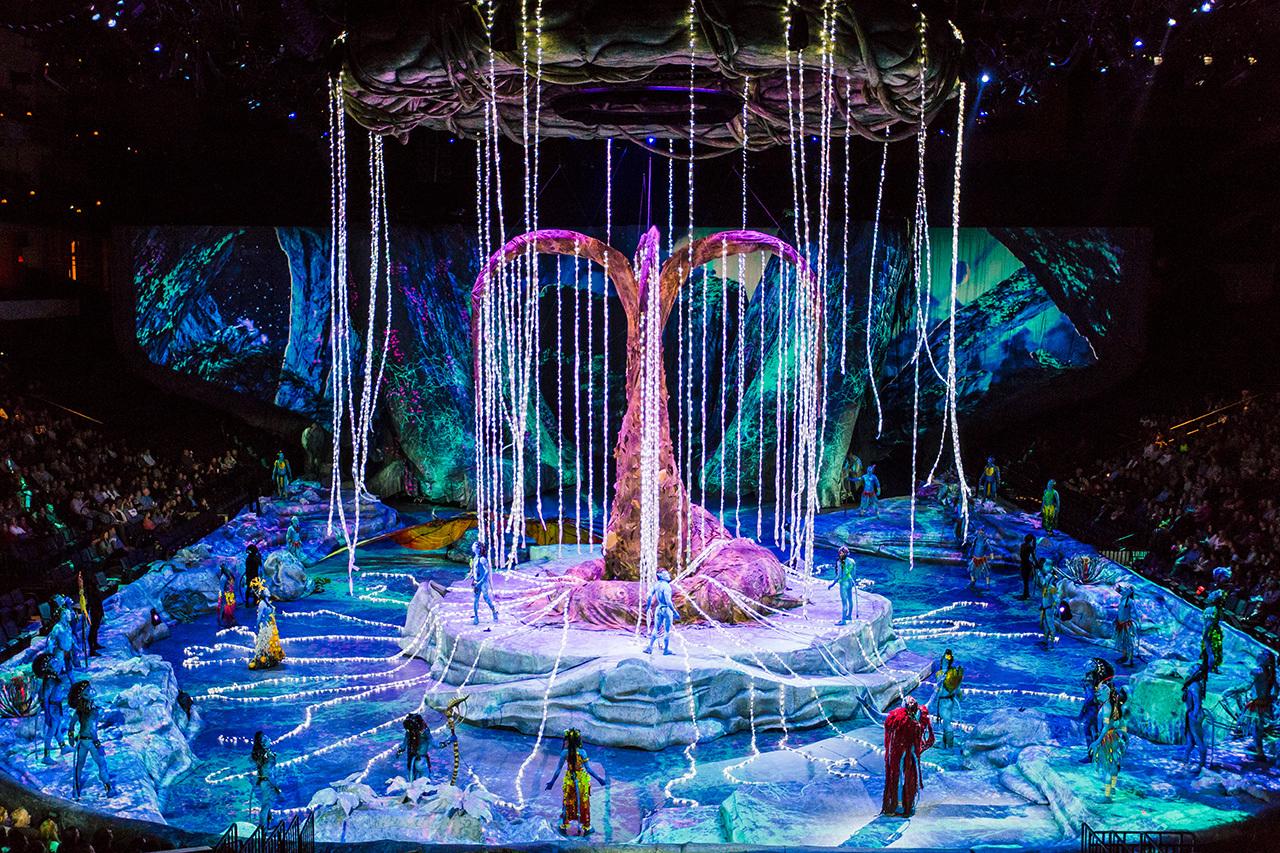 Similar to other Cirque du Soleil shows, the costumes are brilliant and just like the film, the performers were dressed like the blue Na’vi of the alien world of Pandora. There’s also plenty of happening on stage with some carefully crafts. Further assisting with the story of Toruk: The First Flight are the brilliant colours and lighting used to bring this performance to life, including the original music that is quite tribal which really creates this blockbuster experience. With the lighting, I was quite impressed as it helps transform the stage into different landscapes such as water and lava and even the dangerous floating mountains of Pandora.

However unlike the traditional big top circus tents, this production from Cirque du Soleil removes some of the intimacy of the tent, including some of the traditional ‘fantasy’ elements, even though it brings larger than life elements into the production, including this sci-fi feel to it. Given that, Toruk: The First Flight feels familiar yet very different than a traditional Cirque du Soleil performance and if you’re expecting that classic atmosphere such as the circus acrobats, stunts, humour, contortionists and clowns, you might be a little disappointment. 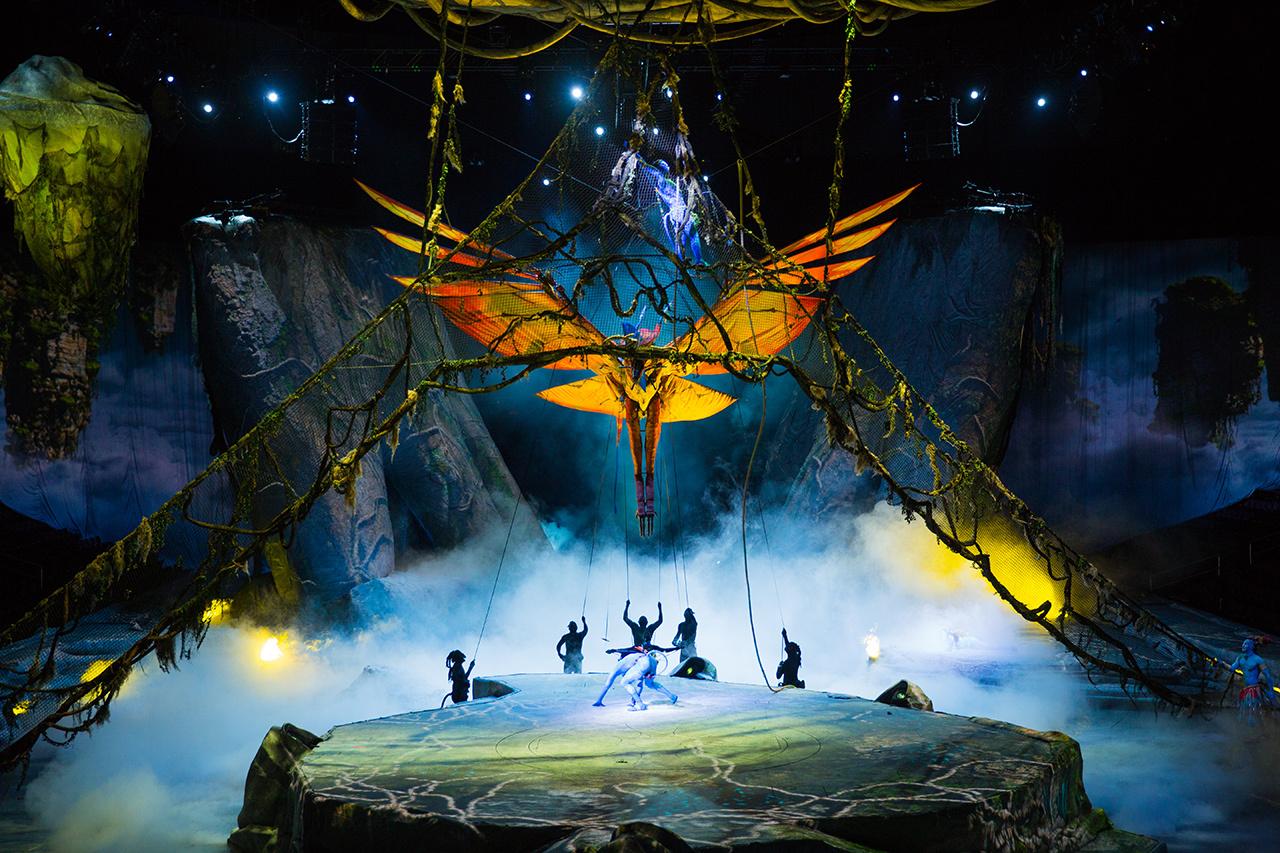 Even so, I still enjoyed the experience of Toruk: The First Flight as this company delivered some well-deserved awe-inspiring moments, dazzling costumes and extraordinary puppetry with a very alien and tribal story. 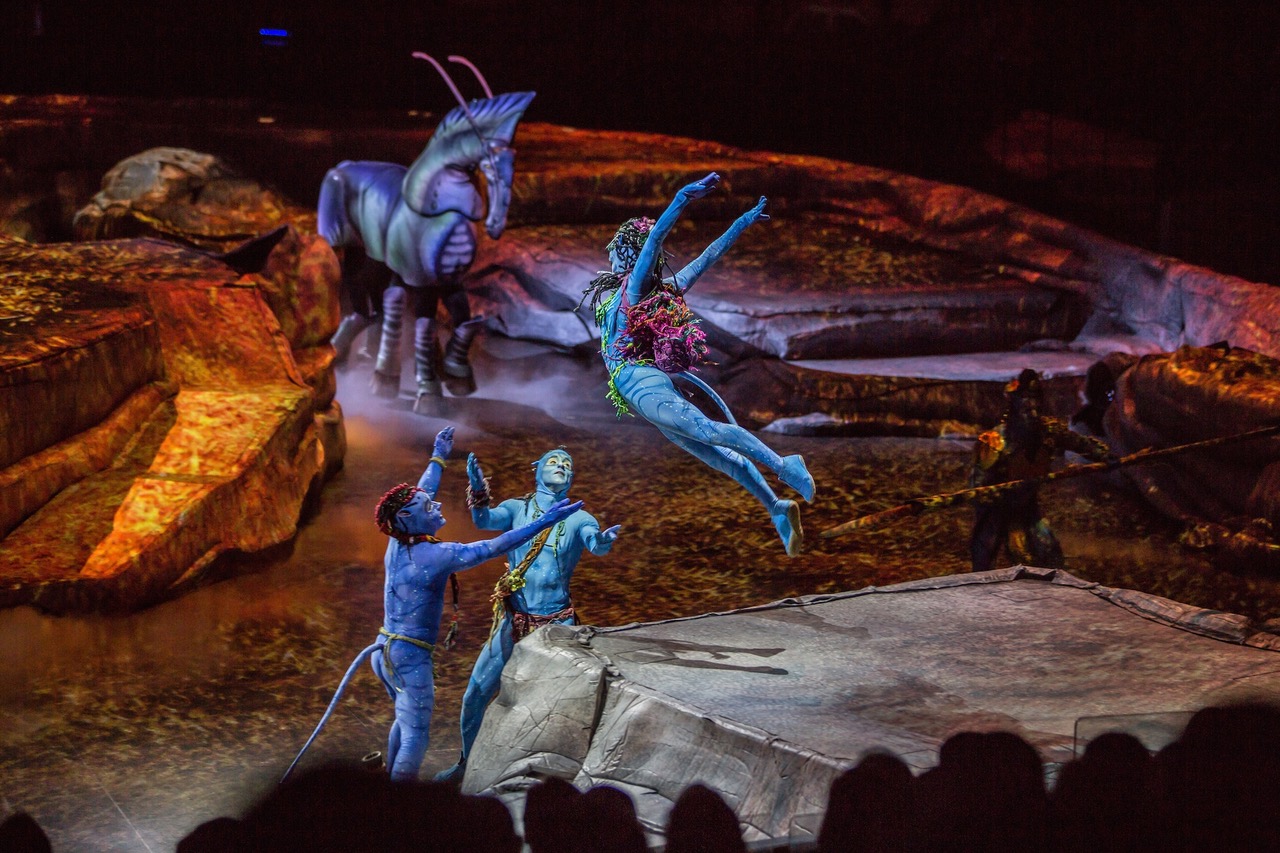