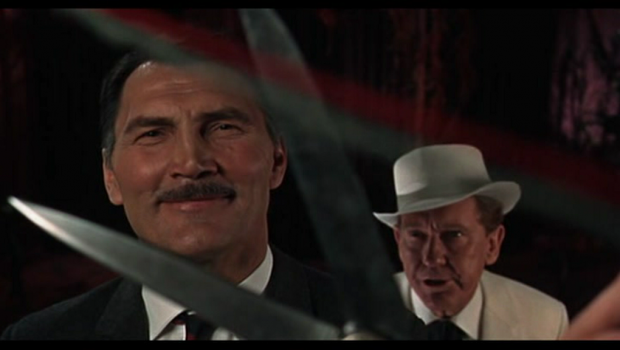 Tuesday, April 18, 2017 – Via Vision Entertainment is thrilled to be releasing Torture Garden. It will be available on Blu-ray and DVD in Australia May 3.

Legendary cinematographer Freddie Francis (The Elephant Man, Cape Fear) directs this horror anthology written by Robert Bloch (Psycho) that features a cast to die for: Jack Palance, Burgess Meredith, Peter Cushing, Beverly Adams and John Standing. Meredith frames each of the stories as the malevolent Dr. Diabolo, a con artist who might well have some real sinister powers as he entices patrons into his haunted house fairground attraction where he promises a glimpse into their futures.  Beware the shears of destiny.

“Palance and Cushing are excellent together and have a great repartee with one another,” notes Mitch Lovell in Video Vacuum, “making you wish they made more movies together.”

Other Blu-ray releases in May include David Cronenberg’s body horror classic Shivers including exciting bonus features On Screen – The Making of Shivers, Original Theatrical Trailer and an Interview with David Cronenberg; and The Way We Were, the romantic classic from Sydney Pollock, featuring Robert Redford and Barbra Streisand as the star-crossed lovers.