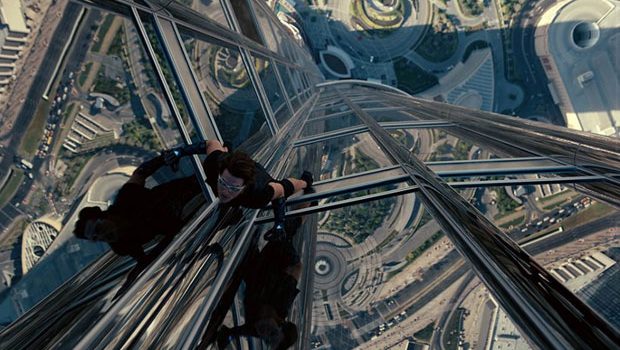 Action films pride themselves on the quality of their stunts, you know, the ones that make you whisper “Wow!” in the cinema as you inch closer to the edge of your seat. The stakes get higher and higher every year as new films are released and directors try to up each other in the ways of cinematic awe. Some films are standouts above the rest, so to celebrate the release of Ben-Hur on August 25, we have curated a list of the 10 most iconic film stunts. 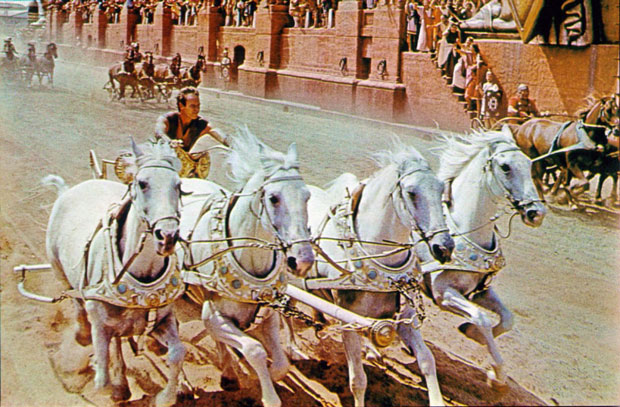 What could now be completed by CGI was completely done by hand – and a lot of horses – in the original Ben-Hur. The film saw Judah and Messala in a head-to-head chariot race which was brutal in its honesty and major in its production – one of the most complex in history. The scene took three months of filming, 8,000 extras, 82 horses, the destruction of two cameras, and numerous dummy stand-ins to create believable deaths. The epic remake of Ben-Hur will be in cinemas from August 25 with another major chariot race! 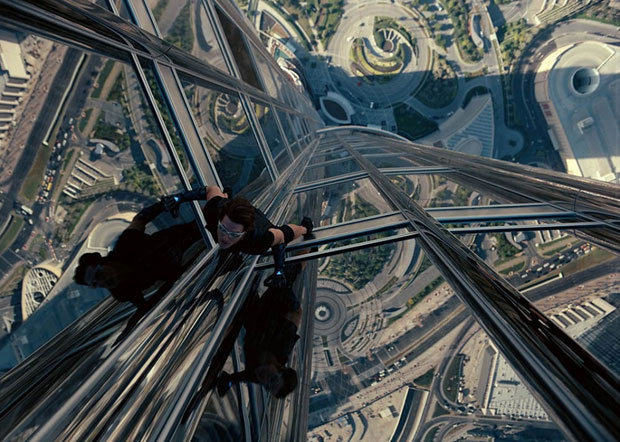 The Mission: Impossible series is well-known for its stunts where Tom Cruise continually puts his life at risk as a secret agent and real-life stunt man. The most iconic stunt in the series is in Mission: Impossible – Ghost Protocol when Cruise scaled the the Burj Khalifa, the 181-story skyscraper in Dubai that holds the record for the highest structure ever built, in a sweaty palm and clenched fist situation for viewers.

The Fast & Furious franchise is the film equivalent of anyone who liked playing with Matchbox cars as a child and enjoyed throwing them across the yard. As a homage to this, Fast Five totalled around 200 cars and in their most iconic scene, the vault heist, they created seven different vaults, some with vehicles inside so to steer the vault in the right direction. They demolished real trees, parked cars and bus stops, only to build them back up to film from a different angle the next day. 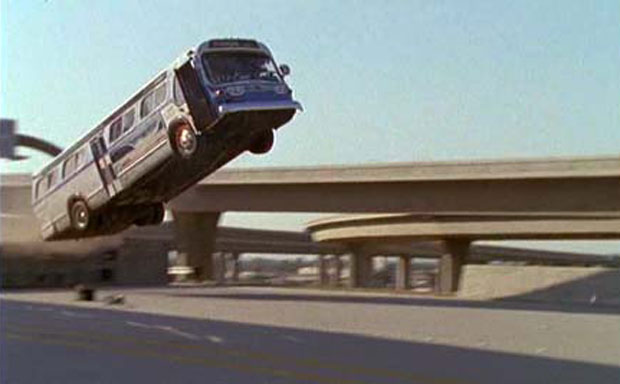 When a lunatic straps a bomb to a public bus, you really have no choice but to keep driving above 50mph at his instruction; even if that includes driving off a California interstate ramp for a 50ft jump. The bus jump stunt in Speed isn’t exactly plausible without the help of a ramp, but the stunt was whipped together on a whim while filming and actually happened, with a stuntman at the wheel of course. 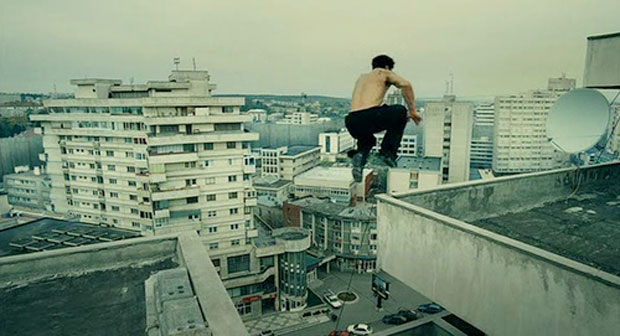 District B13 is set in the ghettos of France and is in itself a whole iconic stunt for its inclusion of parkour and its creator, David Belle. The stunt sequences have Belle, one of the film’s protagonists, running from thugs by scaling buildings and jumping from roofs in excellent urban ninja style. 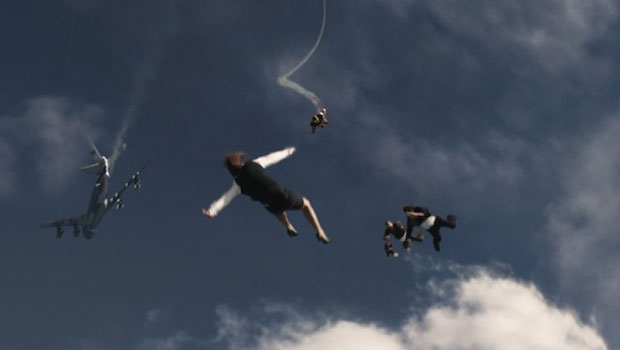 The iconic stunt scene in Iron Man 3 is worthy of awards for so many areas: time, effort, precision and just all round awesomeness. The ‘Barrel of Monkeys’ stunt finds business men and women free-falling from a jumbo jet, only to be saved by Tony Stark in his Iron Man suit. The stunt was completed with real sky dives instead of green screen wires by the Red Bull Skydiving Team who played both the actors and stuntmen, completing eight dives a day without goggles to get the perfect shot. 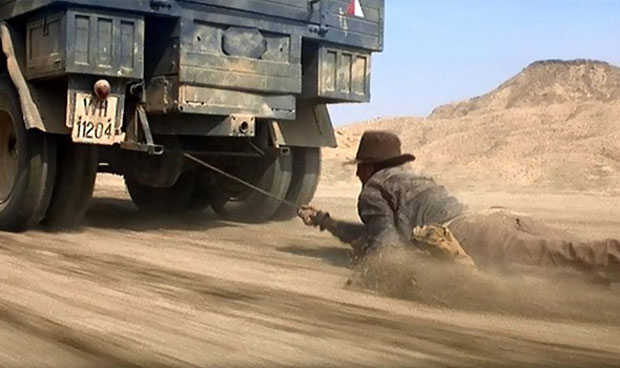 In Raiders of the Lost Ark Harrison Ford gets thrown off a speeding truck by a German enemy and uses his bullwhip to stay attached and take it back – like a true adventurer. While Ford’s stunt double did most of the work here, it’s a chase scene worthy of its iconic status and makes archaeologists everywhere feel a little cooler. The stunt in its entirety took eight weeks and three stunt doubles to film.

One of the coolest and most iconic stunts in cinematic history goes to The Dark Knight as Batman flips the Joker’s 16-wheel semitrailer 180 degrees in the name of good vs evil. The stunt was filmed on location in Chicago in a seamless trick of the eye with a stuntman behind the wheel the entire time. 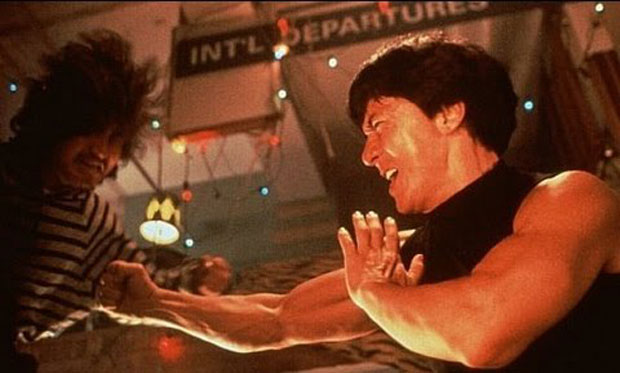 Jackie Chan, the one-man stunt machine, proves that stunts aren’t always focused on vehicles, but people. Infamous for doing his own stunts and breaking every bone in his body for doing so, Rumble in the Bronx was Chan’s introduction to Western cinema and he had a killer stunt to match. Chan has a run-in with some thugs and jumps off a rooftop carpark onto a small fire escape across a gaping street. Chan nailed it on the first go without practicing, but the scary part is that he couldn’t see the landing until he had jumped with three cameras watching his every move.

When one of the most iconic stunts in film history precedes the opening credits, you know it’s going to be a good film. The Spy Who Loved Me finds James Bond, in a ridiculous yellow jumpsuit, skiing off a cliff only to open his trusty parachute and glide to safety in an awe inspiring stunt. The amazing shot took its inspiration from an advertisement for Canadian Club Whiskey and went off without a hitch when filming, but it could have easily turned tragic very quickly. 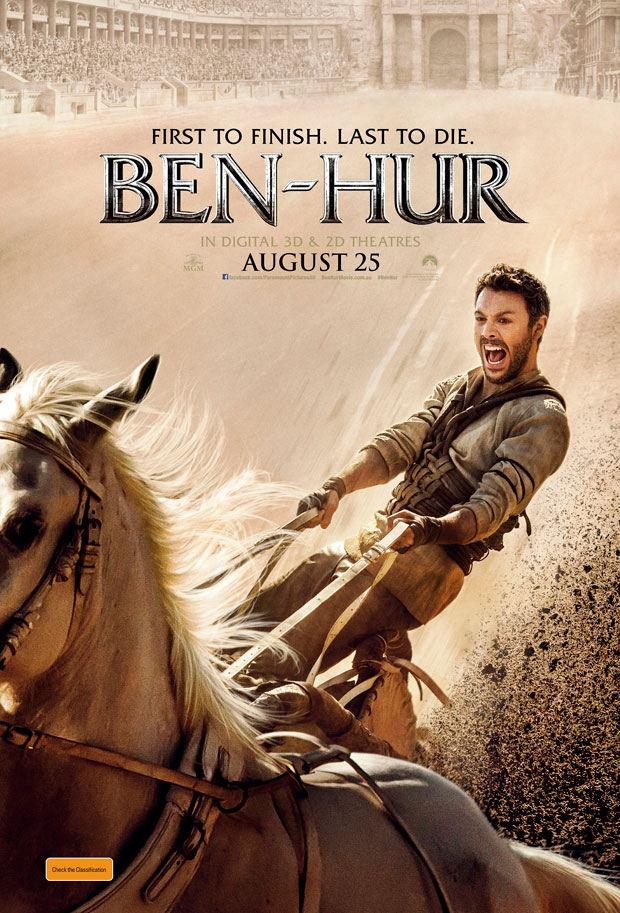