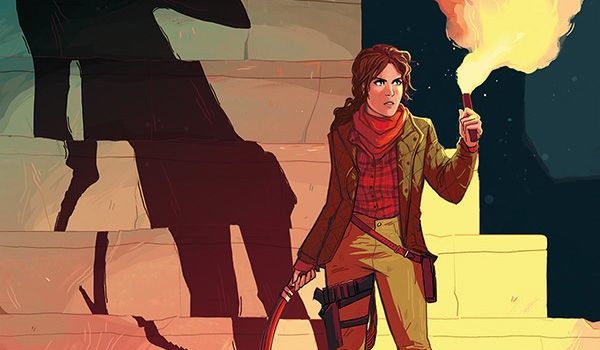 The adventures of Lara Croft continue!

The next installment in the Tomb Raider comic universe is coming this November from Dark Horse. Tomb Raider: Survivor’s Crusade boasts a whole new creative team with Jackson Lanzing and Collin Kelly (Joyride, Hacktivist) composing Lara’s new adventures as she tries to unravel the mystery behind her father’s death.

Impulse Gamer recently had a chat with Lanzing and Kelly where we got to chat about the new story arc, Lara’s unfinished business and some of the challenges of writing a character with such a complex past.

This story arc explore Lara’s investigations as she tries to unravel the mystery surrounding her father’s death. What were some of the rewards and challenges that you encountered when picking up the thread with this story?

KELLY: One of the most exciting things about getting to tell this chapter of Lara’s story is the opportunity to explore everything that makes Lara so much more than an adventuring archaeologist – before she was a tomb raider, she was a Croft, and the lessons of her father shaped her into the indomitable force of nature she’s become. Now that she’s learned his death was no accident – that he was in fact murdered by Trinity – her quest for answers will lead her down a bit of a darker path. An amazing challenge we faced was walking that fine line that Lara herself is struggling with – there’s an entire spectrum of experience between vengeance and justice, and helping Lara navigate between the two without losing herself is the struggle that forms the core of our arc. 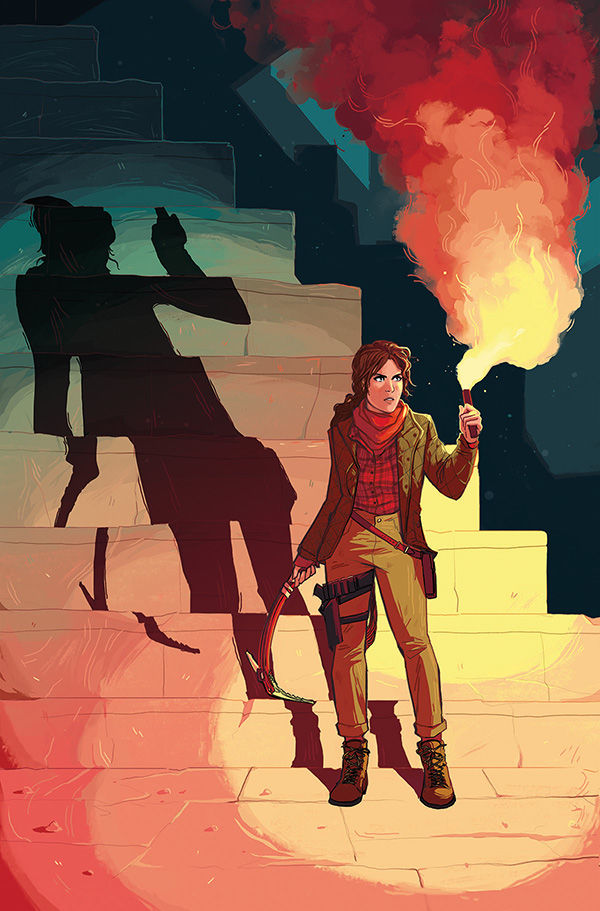 Tomb Raider is one of the largest and most popular gaming franchises to have ever existed. Have either of you played the games before, or is this completely new territory you’re venturing into?

LANZING: Oh, I grew up on Tomb Raider. Truthfully, I probably logged more hours on TR2 than any other game in the late 90s – the gameplay was addictive and the franchise was just finding its footing. This is a little sad maybe, but just running around the Manor alone, jumping in the swimming pool and leaping around the gymnastics set-up, is one of my vivid childhood memories. That said, I fell off the franchise as an adult until the 2013 reboot – which dragged me right back in. Lara wasn’t fighting giant terracotta armies and dragons, sure, but she had something more interesting now: an internal life. Lara’s birth as a survivor of trauma – and how that turns her into the driven hero we once knew – is a huge insight into this character and one we were very excited to explore. Add to that the great work done by Gail Simone, Rhianna Pratchett, Mariko Tamaki, Andrea Mutti, Phillip Sevy and more? There’s a great groundwork for this character that lets us throw Lara right into the action. Rise of the Tomb Raider then left Lara in such a dangerous, angry, vulnerable place – so we knew immediately that this story had to embrace that driven anger. 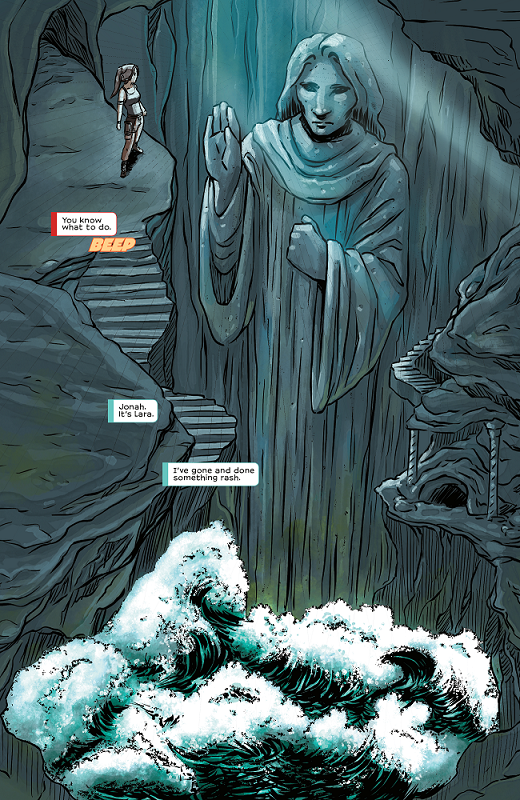 Did you find that you encountered any difficulties when taking on a character with such a complex past as Lara?

KELLY: Absolutely! Any time you’re faced with such a rich character, doing them justice – especially when your entire story hangs on their history – is critical. While we have a firm grasp on the tapestry that is Lara’s past, we had an amazing adventure finding how we can weave elements in that have been left previously untouched. In fact, in our second arc readers will meet a character that was closer to Lara’s life than she ever knew, a kind of dark mirror with as much to gain through Trinity’s victory as Lara has to lose. The real difficulties, however, lay in grounding the emotional authenticity of what Lara is going through – though her father is dead, Lara isn’t the kind of woman to collapse in grief. She’s an adventurer who is ready to throw herself into the next mission… and while that forward momentum will keep her on Trinity’s tail, it is also keeping her from facing the brutal truth that everyone has to face: just because a child is supposed to outlive their parent, doesn’t make the living any easier. 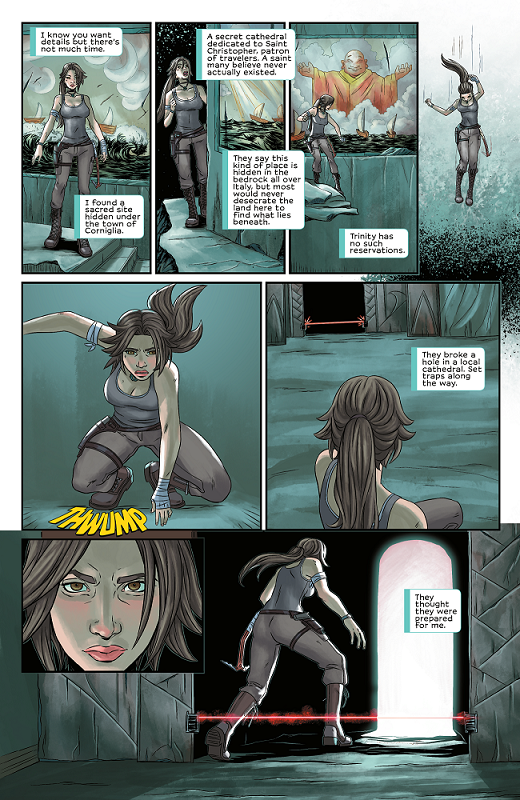 Ashley Woods illustrates this series, with Michael Atiyeah providing the colours. What do they both personally bring to make this an engaging visual narrative?

LANZING: Ashley was a dream collaborator for us on this project – I’ve been a fan of her striking work on NIOBE: SHE IS LIFE for a while now. Her ability to match beautifully-rendered locations and emotional weight balances this book perfectly. And when the action starts, Ashley shines even harder. We’re tempted to put Lara into a desperate fight every issue just to see how Ashley brings the pain. And then Michael comes in and adds an incredible amount of detail, energy, and life to each page. In the first two issues alone, the story takes us to the Italian Riviera, Thailand, London, and the caves beneath – and Ashley & Michael bring each to life gorgeously.

What has been the most rewarding aspect of working on Tomb Raider, and what part of continuing Lara’s story has given you the most satisfaction?

KELLY: Both Jackson and myself have a long history with the character, and getting the chance to bring any part of her story to life was just magic, truly. That we got to tell this story – this rich tale of tragedy and grief, but also self-reflection and personal empowerment – meant the world to us, because we genuinely were given the chance to evolve and deepen the inner life of this amazing woman. And then – oh yes, there’s an and then – we got to take that strong emotional core, and weave it into something we’ve wanted to do all our lives: create amazing tombs for raiding. Creating the secret history Lara is uncovering, and the locations she’s going to traverse, were a childhood dream come true. Utilizing our deep love of the weirder corners of history, Jackson and I are incredibly proud of challenges we built for Lara to overcome, which would be deadly even without Trinity’s opportunistic involvement. We’re thrilled to be inviting readers to this chapter of Lara’s life, and offer a warning: what Lara discovers will shake the foundations of everything we’ve ever known. 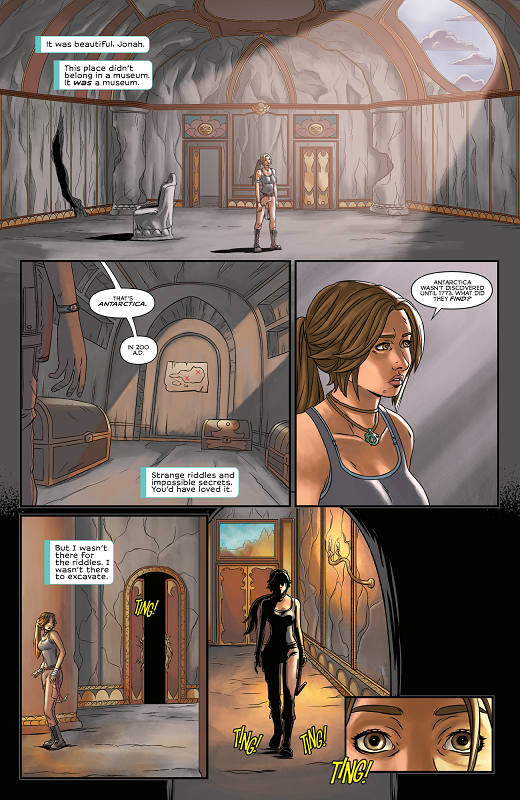 What about people who aren’t familiar with Lara Croft or the Tomb Raider universe, but are fans of your previous work? What does this story arc offer for them?

LANZING: Truthfully, this book is a departure for us in many ways. It’s much more action-focused than our previous work – and much more grounded, despite the Tomb Raider of it all. This new iteration of Lara lives in a world without the explicitly supernatural, so we won’t be bringing you any spaceships, dragons, etc. And unlike our normal ensemble focus, we’re really lensing in deeply on one character – trying to live as truthfully as we can inside Lara’s pain, anger and drive towards violence. That said, her relationship with Jonah is a huge cornerstone of the story for us – especially in exploring how that holds up to Lara’s single-minded quest to destroy Trinity and bring her father’s killer to justice. Watching two friends tested by their own individual goals is the stuff HACKTIVIST was made of – so maybe it’s not that much of a departure after all. 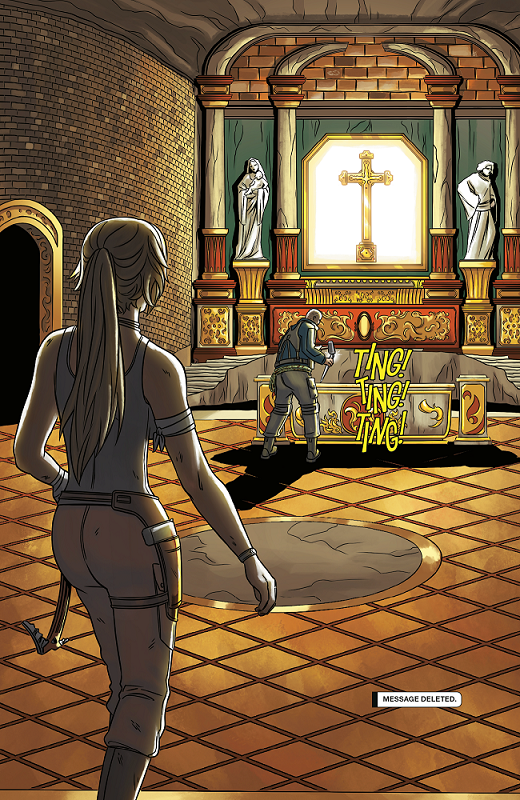