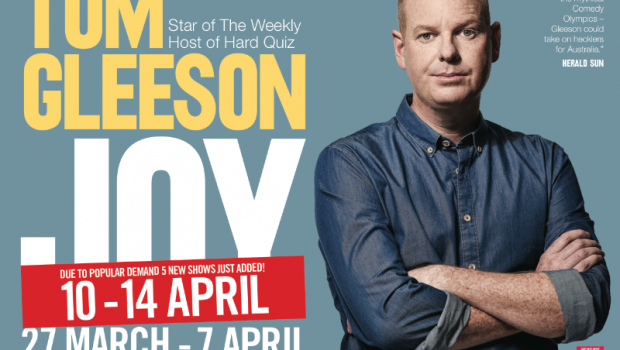 There’s not much Tom Gleeson didn’t do in 2018 – and Australia can’t get enough of him.

Celebrities such as Karl Stefanovic, Lee Lin Chin and Andrew Denton keep lining up to be dragged over the coals by Tom on The Weekly’s Hard Chat. Sci-fi movie geeks and Led Zeppelin buffs are dying for the chance to impress Tom and have their shot at returning a quip on Hard Quiz, now the highest-rating quiz show on TV.

Despite his ruthless grillings, he’s still got a lot of love to give. He campaigned mercilessly to help Grant Denyer win the Gold Logie and he bloody won it! And now he’s up for his own Logie in 2019. Tom’s a true champion on and off the stage.

Except to the people of Cairns, perhaps, who were offended after his ‘Go Away’ segment on The Weekly saw him poke fun at their beloved city while taking a leak in the Cairns Esplanade lagoon. The Cairns Post even went so far as to call him an “unfunny drongo”. This was the highlight of Tom’s year.

Tom Gleeson is one of the sharpest minds in Australian comedy so it’s no surprise he’s been selected to host the Oxfam Gala at the 2019 Melbourne International Comedy Festival. His stand-up shows are relentlessly hilarious and masterful. Come and see the great man live on stage, in his natural habitat and where he is currently in the form of his life.

“I can’t wait to rip into my new tour. Don’t get me wrong, TV is nice but stand up is my specialty. It’s going to be an absolute Joy.”
– Tom Gleeson