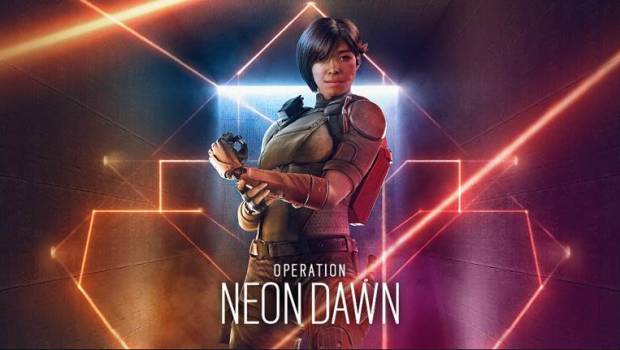 In Operation Neon Dawn, players will discover a brand-new defender: Aruni. equipped with an original gadget called the Surya Gate, Aruni can deploy laser gates on walls, hatches, doors, and windows. Those gates damage Attackers and their utility but turn off to allow defenders to access. The gate is intended as an obstacle, zapping all drones, projectiles and damage Operators. Aruni also comes with a P10 RONI or a MK 14 EBR as a primary weapon, and a PRB 92 as a secondary weapon.

In addition to this new Operator, players will discover a reimagined Skyscraper map, which has been newly reworked with three major objectives. The first is driving Attackers inside by lowering the number of balconies and relocating them to remove some of the crossfire players could create previously from outside. An entirely new rotation between the two sides of the building on the second floor was also added. Lastly, the bombsites have been balanced to make them all more competitive.

With this new season also comes new accessibility features. Voice to Text and Text to Voice options for the in-game chat channel as well as chat assistance like Narration and Hints have been added to the Options menu. Players can also adjust the audio/visual cues for the chat and the font scaling.

Finally, Operation Neon Dawn marks the launch of the Sixth Guardian program, in which certain seasons will have a limited-time bundle dedicated to a different charity. More info will come soon regarding the Doc Sixth Guardian Bundle.