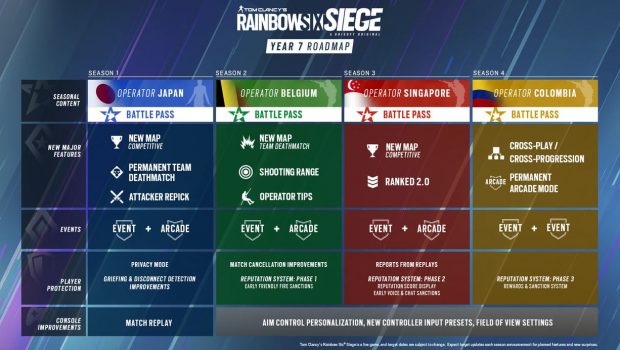 Demon Veil, the first season of Year 7, will bring the Japanese Defender Azami, a new country club map set in Ireland, and a Team Deathmatch permanent game mode. Season 2 will introduce a Belgian Operator and an exclusive Team Deathmatch map set in Greece. Season 3’s Operator arrives from Singapore, bringing a new competitive map. The last Operator of the year will be from Colombia.

In Season 3, players can access reporting options in Match Replay to address harassment in voice and video chat. Season 3 also introduces Reputation Scores for players, which will launch in Season 4 and start deploying rewards and sanctions to block repeat offenders. In Year 7, the development team strives to meet their continued goal of creating a secure and fair environment.

To better introduce new players to Rainbow Six Siege, Year 7 adds a Shooting Range: playable spaces to practice, train, and experiment without the pressure of a match. Another onboarding tool, Operator Tips, will let players get to know each Operator, their gadgets, and any tips that might be helpful for Attacker or Defender strategies.

BALANCING AND PLAYLIST UPDATES
The development team will continue reworking several Operators this year including Zero, Bandit, Dokkaebi, and Thatcher. Year 7 will add Team Deathmatch and Arcade permanently to the playlist, as well as revamping the Ranked experience to reflect a player’s progression better.