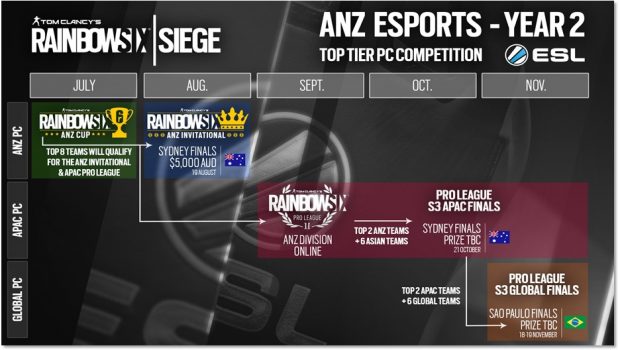 SYDNEY, AUSTRALIA — June 29, 2017 — Ubisoft® has announced that the Tom Clancy’s Rainbow Six® PC Pro League will arrive in the Asia Pacific Region (APAC). After one year of intense high-level competition in Europe, Latin America and North America, the Tom Clancy’s Rainbow Six Pro League will arrive in the APAC region, with players from Japan, South Korea, Southeast Asia and Australia–New Zealand competing to be crowned the Rainbow 6 APAC champions, at a live event to be held in Sydney, on October 21-22.

To qualify for the APAC Pro league, teams will need to first compete in the Rainbow 6 ANZ Cup, which commences on July 16.  Cups will be held every Sunday for four weeks, with the eight best teams qualifying for the ANZ Invitational, with a live studio Final on August 19 in Sydney.

For PlayStation and Xbox One teams, a range of community and GO4 cups will run alongside the Pro League, offering continued prize pools and stiff competition for Rainbow Six Siege’s console community.