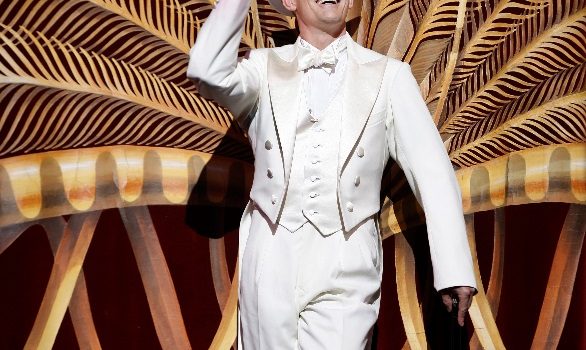 THE PALMS AT CROWN

FOR TWO SHOWS ONLY ON

Todd McKenney is back on stage with a brand new 2 hour show guaranteed to give you plenty of laughs, along with all the great hits from Peter Allen and songs from his all-time favourite performers including Bette Midler, Tom Jones, Barry Manilow and more at The Palms at Crown on Saturday June 19.

Todd will be treating this show like a fabulous dinner party with friends. There will not only be the wonderful music but like any good dinner party, there will be plenty of stories, lots of questions, banter and interaction with the audience.

His special guest and MC will be Michael Pope who has been warming up TV audiences for decades including Dancing With The Stars audiences since 2004. He has many stories of Todd for the audience to feast on and he may even whip up a quiz for all Todd’s guests to see how much they know about their host.

Todd will be joined by his sensational band to perform such wonderful hits as Tenterfield Saddler, I Still Call Australia Home, I Go To Rio, I honestly Love You, don’t Cry Out Loud, The More I see You, Delta Dawn, Cabaret, Money, If I only Knew, That’s Life, Love Is In the air, Purple Rain, Everything Old is New Again, The Greatest Show and there will be more.

During the evening, Michael Pope will pop in and out during the show to keep the banter going.

You can also throw a few questions at Todd on any aspect of his life. Want to know the goss from behind the scenes of Dancing With The Stars or Musical Theatre then get your questions ready.  You are welcome to score Todd, but please be kind.

By the time you leave the theatre, you will have the feeling of being part of Todd’s funny family.

Venue: The Palms at Crown