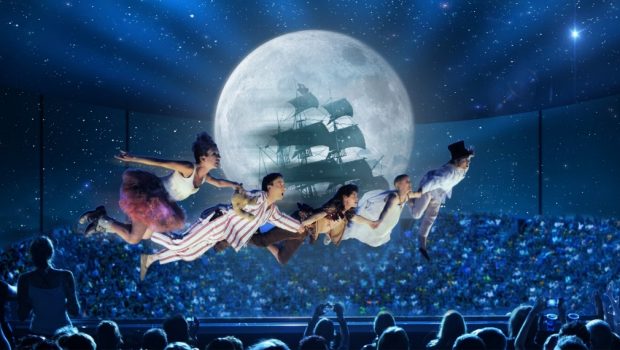 Toby Schmitz and Alison Whyte will be joining the cast of upcoming major theatrical production Peter Pan – The 360° Adventure in the coveted roles of Captain Hook and Mrs Darling, which opens its Australian tour in Melbourne in June.

“I am ecstatic that two of Australia’s most respected theatre performers, Toby Schmitz and Alison Whyte, will be joining the cast of Peter Pan – The 360° Adventure,” said producer Craig Donnell.

“They both bring such a depth of talent and experience to our cast that is unmatched and I know that they will bring their characters, the dastardly wicked pirate Captain Hook and the much-loved Mrs Darling, to life in a way that will captivate and charm our audiences,” he added.

Toby Schmitz is a writer, director and actor most recently seen on television in Bloom (Stan), and on stage in Thom Pain (based on nothing) and Degenerate Art, which he wrote and directed (Red Line).

Toby’s other theatre credits include The Rover, Hamlet, The Wild Duck, Measure for Measure, Thyestes, Strange Interlude, Ruben Guthrie and Dance of Death (Belvoir), The Present, Rosencrantz and Guildenstern are Dead, Travesties, Hanging Man, Rabbit and The Great (STC), Wild and The Importance of Being Earnest (MTC), Much Ado About Nothing (Bell Shakespeare), and The Boyce Trilogy (Griffin Theatre). Toby received Helpmann Award nominations for his performances in Thyestes, Much Ado About Nothing and Ruben Guthrie and Sydney Theatre Award Nominations for Howie The Rookie, The Great and Ruben Guthrie. Toby was awarded the Patrick White Award for his play Lucky.

Toby’s television credits include S.O.Z.: Soldiers or Zombies, Reckoning, Newton’s Law, Blue Murder, Miss Fisher’s Murder Mysteries, Underbelly: The Man Who Got Away and Black Sails. His film credits include Griff the Invisible, Three Blind Mice, The Rage in Placid Lake, and Somersault.

Alison Whyte is one of Australia’s most accomplished and celebrated actors, with an outstanding reputation in theatre, film and television. Most recently, Alison has been performing in the blockbuster production of Harry Potter and the Cursed Child. Other noted theatre appearances include The Testament of Mary, Love and Information and Travelling North (all for Sydney Theatre Company) as well as Australia Day for both STC and Melbourne Theatre Company and Last Man Standing, Summer of the Seventeenth Doll, Clybourne Park and All About My Mother (all for MTC).

On the small screen, Alison has been seen in numerous productions, including The Doctor Blake Mysteries, Miss Fisher’s Murder Mysteries, Tangle, Satisfaction, City Homicide, Marshall Law, Sea Change, Good Guys Bad Guys, G.P. and the critically acclaimed Frontline, amongst many others. Alison has most recently been seen in Fisk, Harrow S3, The Kettering Incident, Glitch and Playing For Keeps (Series 1 & 2).

She originated the role of ‘Grace’ in Belvoir St Theatre’s critically acclaimed production of Faith Healer, starring alongside Colin Friels and directed by Judy Davis, reprising the role for the Melbourne Theatre Company and Adelaide tour. Alison is also the recipient of numerous awards including the 2009 ASTRA Award for Satisfaction, 2008 TV Week Logie for Satisfaction, 2005 Green Room Award for Dinner and the 1997 TV Week Silver Logie Award for Most Outstanding Actress. Alison won both a Green Room Award and a Helpmann Award in 2010 for her outstanding portrayal of ‘Elizabeth’ in MTC’s production of Richard lll.

Loved by more than 1.6 million people in the UK and US, Peter Pan – The 360° Adventure will be housed in Australia in the new Impresario Hippodrome – a 1,500 seat, air conditioned, theatre in-the-round with no seat more than 20 metres from the stage.

“The cast perform elaborate aerial feats against this backdrop to give the audience a bird’s eye view of flying over the rooftops of Edwardian London to the magical kingdom of Neverland. With an original soundtrack written by celebrated composer Benjamin Wallfisch and recorded by members of the London Symphony Orchestra, the experience has been described as like living in Pixar film or a spectacular video game,” he added.

Peter Pan – The 360° Adventure will be presented in Australia by Craig Donnell for Impresario Productions in association with The Estate of John and Barbara Gilbert and Matthew Churchill Limited.

Further casting details will be announced in the coming weeks.

“Thanks to this wonderful production, I now believe in fairies” Russell Brand

“It feels, thrillingly, as if we are flying with them” Daily Telegraph (UK)