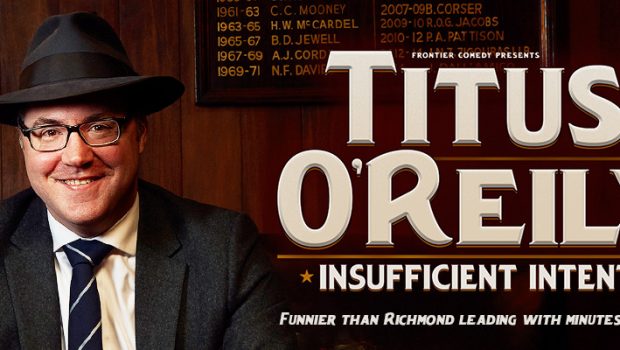 Frontier Comedy are thrilled to announce a national tour of popular sport satirist Titus O’Reily’s new show Insufficient Intent this August/September. Titus (Herald Sun, Channel 7, Nova 100) will be performing his hilarious review of the 2017 AFL Season across the country on the Bye Round Weekend – with no AFL game on, get your Bye Weekend football fix with Titus O’Reily and special guest Sergio Paradise (co-host of Titus’ weekly podcast Titus and Sergio’s Variety Hour).

The Insufficient Intent tour kicks off on Thursday 31 August at Melbourne’s Comedy Theatre, going on to Sydney’s Concourse Concert Hall on Friday 1 September, Perth’s Octagon Theatre on Saturday 2 September, and Adelaide’s Arkaba before wrapping up at Canberra’s Street Theatre on Monday 4 September.

★★★★ ‘It wasn’t conventional stand-up and strayed from the Melbourne International Comedy Festival’s traditional rubric but you can’t condemn the festival for its recruiting – a boom acquisition which sold out crowds, unearthing versatility and bravado in the process.’ – Beat Magazine

While he is known for his Captains Chats on TV (Channel 7’s AFL coverage), radio (Nova 100 Breakfast with Chrissie Swan, Sam and Browny’s weekly AFL wrap), online (weekly blog The Monday Knee Jerk Reaction) and print (Herald Sun’s Titus O’Reily’s highly unhelpful guide to AFL column), Titus is no stranger to the stage, having already performed in two different stage shows this year alone – at the Melbourne International Comedy Festival in Dane Swan: In Conversation with Titus O’Reily which received rave reviews and sold out crowds; and for one night only by demand at Sydney’s Comedy Store in his one-man show Titus O’Reily Returns!

In his new show Insufficient Intent, Titus captures the trials and tribulations that come with being a sports fan, covering everything from the insufficient intent rule to his recent discovery that the AFL has teams outside of Melbourne. Titus’ lightning quick, clever and hilarious insights on AFL has earned him close to 150,000 Twitter followers and more than 50,000 Facebook followers.

Titus’ shows regularly sell out so get in quick!

This event is recommended for patrons aged 15+