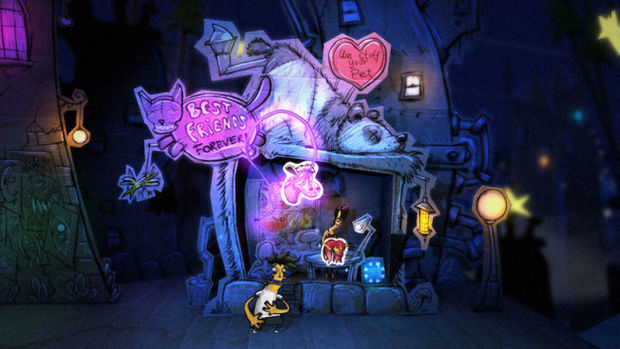 Tinfoil hats at the ready! Stick It To The Man is out now on Xbox One

28th July 2014: Zoink! Games and Ripstone Publishing announced today that their critically-acclaimed psychic platform-adventure game Stick It To The Man! is available to download now from the Xbox One Games Store priced at £6.39 / €7.99 / $9.99.

With well over 1.2 million players already across PlayStation platforms and after numerous requests from the community – Ray and The Man are finally making their Xbox One debut today. Fans can also look forward to exclusive unlocks from the team at Zoink! as they progress through the game and earn achievements.

Stick It To The Man! centres around hardhat tester; Ray – who has a bizarre accident at work and wakes up with a giant pink spaghetti arm sticking out of his brain. This fluorescent arm, invisible to others, gives Ray strange powers, allowing him to hear people’s thoughts and change the paper world around him with stickers. Digging into the brains of his fellow citizens, including the likes of Santa Claus, Captain Ahab and Elvis to name but a few; it’s up to Ray to gather clues from countless insane characters and solve mind-boggling puzzles – all while trying to escape the evil clutches of The Man! Can you help Ray out of this sticky situation?

For more information on the game please check out the official website www.stickitgame.com. Fans can also keep their eyes peeled for sneak peeks and competitions on the Stick It To The Man! Facebook page and join in the conversation on Twitter #StickItGame