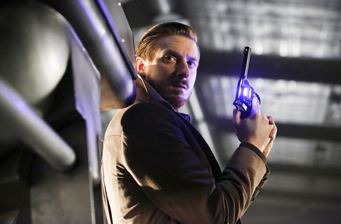 Arthur Darvill was once one of the Doctor’s most loyal companions, and now he’s commandeering the TARDIS for a trip to Oz Comic-Con. He will be appearing at Oz Comic-Con Perth at the Perth Convention and Exhibition Centre on March 25-26, and in Adelaide at the Adelaide Showgrounds on April 1-2.

Arthur Darvill will be joining an all-star line up, including Jason Momoa (Adelaide only), (Game of Thrones), Melissa Joan Hart (Sabrina The Teenage Witch), David Giuntoli and Bitsie Tulloch (Grimm) and Brent Spiner (Star Trek: The Next Generation).

Darvill is best known for his role as Rory Williams, companion to Matt Smith’s Eleventh Doctor in Dr Who from 2010-2012, and now stars in DC’s Legends of Tomorrow as Rip Hunter, which screens on Foxtel. Outside of his space and time transcending television roles, Darvill has also played in a band named Edmund, after his favourite Chronicles of Narnia character, and starred on both West End and Broadway.

Darvill will be taking part in professional photograph and autograph opportunities across each weekend as well as exclusive question and answer panels on each day of the event.