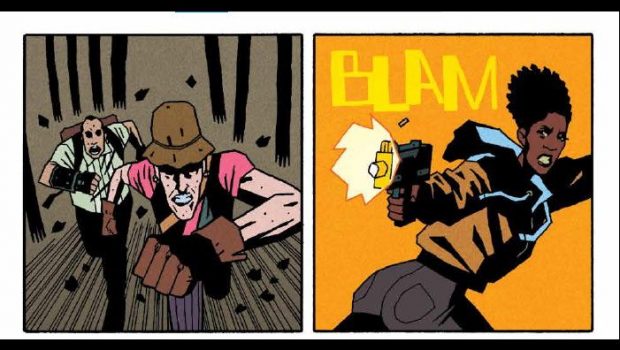 Summary: Worth a look if you are into time travel stories. Will most likely make more sense later in the series.

Tatsuo finds himself in the middle of a forest with Agent Wells after fleeing the syndicate only to be captured by their rivals. The only thing is that they don’t know what time period they are in and who is in charge. A hint of the outcome comes when Tatuso’s companion shoots one of their attackers and he feels it.

Even though this is only the second entry in this series I still feel like I have missed a lot of the set up that would make things make sense. Also it being a time travel story a lot of things will not make sense until later in the series.

As is explained in the timeline the fact that time travel exists means that people know things are going to turn out but some people do not want to know too much about their future any way.

Given the complexity of the story I think the flat colour style of the artwork and simple linework suits it. Having too busy artwork on the page would make it difficult to follow the story as you can follow one or the other but not both.

Maybe this one would be better to get when the full story is available, but if you are still interested have a look through it first before you commit.