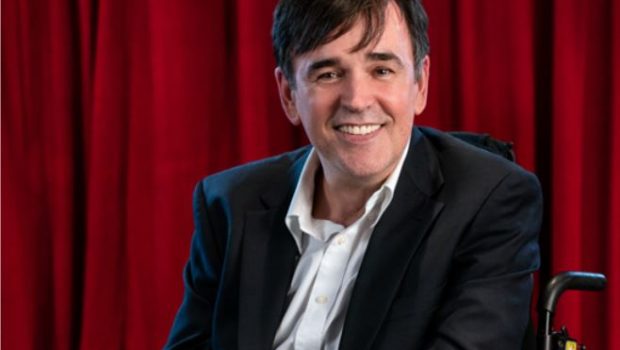 Tim Ferguson ‘A Fast Life on Wheels’ on tour

“Everybody’s got something,” said Ferguson. “For me, MS is a reminder that a clock is ticking and that you may not have as much time to do the things you want to do as everybody else.”

Building on the live show of his best-selling memoir Carry a Big Stick, A Fast Life on Wheels (FRINGE WORLD 2019 Weekly Award winner and The Advertiser’s Best Male Solo Show at Adelaide Fringe 2019) is Ferguson’s personal tragicomic story showing what life in a wheelchair is really like.

“I confront people with their own mortality, tell them to hurry up with their lives. Tick-tock! Most people with disabilities are getting on with life, doing as much as they can. But the way they are treated by society is similar to how women were 100 years ago, when employing women in anything but menial or nursing work was rare – women being executives was considered crazy. This is still the case for many people with disabilities. So I’m working on promoting employment for people with disabilities, and getting young people with disabilities out of aged care facilities – those are some issues this show spotlights in a humorous way. The thing with me making fun of having to get around in a wheelchair is its ok to laugh at this stuff because laughter is the first step to understanding.”

A testament to the power of humour in any situation, Ferguson constantly defies the challenges of MS and has vowed to never stop making audiences laugh, saying “I don’t ‘suffer’ MS. It suffers me”. Since transitioning from stand-up to sit-down comedy performance, Ferguson’s continued writing comedy and teaches others how to, presenting a one-day version of his international masterclass alongside upcoming tour dates in selected cities. To be in the presence of this masterful comedic mind and be entertained by his touching, inspiring and ultimately uplifting personal journey will make you laugh, cry and want to seize the day. With Ferguson’s trademark wicked humour, outrageous stories and breath-taking insights, his new hour of comedy is hell on wheels.

“He’s a natural born storyteller, and has lost none of his hard edge… Thoroughly entertaining, irreverent as ever, funny, sad, intelligent, Tim Ferguson is still very much a star” – The Clothesline, Adelaide
“A candid show from the heart” – Fourth Wall Media