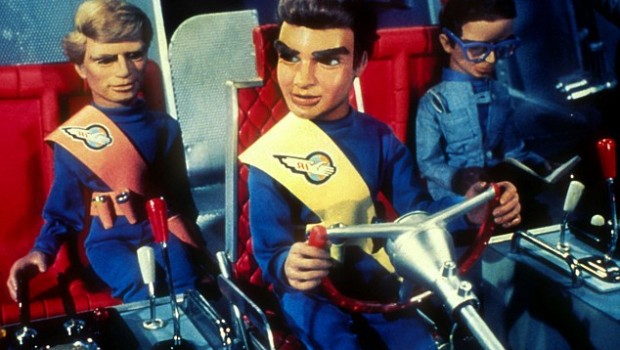 Fifty years after its television debut the iconic series is back in production featuring a talented cast led by Rosamund Pike (The World’s End, Gone Girl) as Lady Penelope and David Graham (Thunderbirds 1965) reprising his role as chauffeur and International Rescue agent Parker.

Debuting on ITV in 2015 this re-invention of Gerry and Sylvia Anderson’s much-loved series will be produced using an innovative mix of CGI animation and live-action miniature sets.

Unstoppable inventor Brains will be voiced by Kayvan Novak (Fonejacker, Facejacker) whilst Tracy brothers Gordon and John are both played by Thomas Brodie-Sangster (Love Actually, Game of Thrones). Rasmus Hardiker (Saxondale, Lead Balloon) has been cast as both the youngest and oldest Tracy brothers Alan and Scott. The fifth Tracy brother, Virgil, will be played by David Menkin.

Plus Thunderbirds Are Go! will feature new characters including Kayo, the Tracy brothers’ friend and fellow island resident, who will be played by Angel Coulby (Merlin, Dancing on the Edge) and Colonel Casey voiced by Adjoa Andoh (Invictus, Doctor Who)

Giles Ridge, Executive Producer, Thunderbirds Are Go! said: “Each member of the cast has brought a brilliantly fresh and unique approach to these wonderful characters.  I can’t think of anyone better than Rosamund to bring back to life the fabulous Lady Penelope and we are honoured that David Graham has joined the cast to revisit his role as Parker.”

Rosamund Pike commented: “I’m very excited to bring Lady Penelope’s wry wit and taste for adventure to a new generation.  Exploring the scenes with David Graham has been an absolute delight. The scripts are very modern, very fresh and very funny. We’re all eagerly anticipating our next stint in the recording studio!”

David Graham, playing Parker, added: “I am triple chuffed to be on board the new series of Thunderbirds Are Go! and reprising my role of dear old Parker with such a distinguished cast.  My driving skills are in good nick and I am delighted to be behind the wheel again with M’Lady.  Cheerio!”

Featuring the world’s most famous family of heroes, International Rescue, Thunderbirds Are Go! will blast the five brave Tracy brothers back on to television screens piloting their incredible vehicles into impossible rescues across the globe.

Thunderbirds Are Go! is produced by ITV Studios and New Zealand based Pukeko Pictures, with world-famous Weta Workshop (Avatar, King Kong, The Lord of the Rings) designing the series and producing the miniatures. The 26 x 30’ major new children’s series will debut on ITV and UK’s CITV Channel in 2015.

Thunderbirds Are Go! has been picked-up by Jamila Metran, Head of Programming for CITV, and is currently in production.